I can see an argument for both, because the sentence "I like it" and "I like to eat it" both make sense

The main verb is "like". The object of "like" is "to eat fish". "To eat" is an infinitive, and it has the object "fish". Together, "to eat" and "fish" form an infinitive phrase that acts as a noun phrase.

As a noun, an infinitive phrase will either appear as the subject of the sentence or the direct object.

"The cat likes fish" – fish is the object of “like”

Noun phrases can be the subject of sentences.

Noun phrases can be replaced by a pronoun:

To eat fish is a noun phrase.

A noun phrase can be the object of a verb.

"The cat likes to eat fish."

The cat likes to eat fish.

There's only one object and that is the noun phrase "fish", functioning as object of "eat". "To eat fish" is not a noun phrase but a subordinate infinitival clause and thus it cannot be the object of "likes".

This is commonly known as a catenative construction where, in this case, "likes" is the catenative verb and the subordinate clause is its catenative complement.

The term 'catenative' comes from the Latin word for "chain", for the construction is repeatable in a way that enables us to form chains of verbs in which all but the last have a non-finite complement. 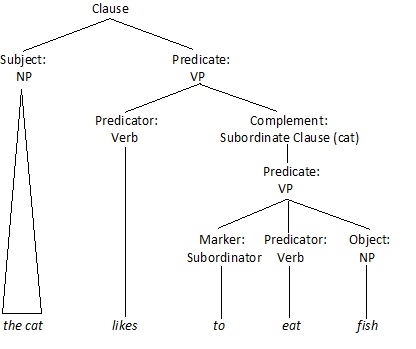 As a host of valuable comments on other answers were deleted, I've summarized the arguments against 'to eat fish' as object of 'like' below.

1. Objects are allowed by transitive verbs

If to-infinitival clauses were objects, they should also be allowed by most or all verbs that have transitive uses.

*I keep to eat fish.

Clearly, they are not.

2. Objects can generally be the subject of a corresponding passive.

This is impossible with to-infinitival clauses no matter the verb.

*To eat fish is seen by me.

*To eat fish is liked by me.

*To eat fish is kept by me.

3. to eat fish is structurally not an NP

It has at its head the verb eat. Note we can drop out fish with no problem. But, if we drop out eat, there is a significant change in meaning - one where fish is no longer a noun.

The cat likes to eat.

The cat likes to fish.

Noun phrases all take a standard set of modifiers including determiners (a, the, many, all, etc.) and adjectives. To-infinitivals do not allow these.

The cat likes all small fish.

*The cat likes all small to eat fish.

*The cat likes to all small eat fish.

The cat likes to eat all small fish.

4. The possibility of being the reference of a pronoun does not make something a noun

The argument that anything that can be referenced (or replaced) by a pronoun is itself a noun, is simplistic and does not stand up to serious consideration.

All of the following can be referenced (or replaced) with a pronoun. Given their diverse internal structures and distributions, almost no one would claim them all to belong to a single category 'noun'.

I exercise for twenty mintues every morning. [main clause]

It keeps me healthy.

He recommended to exercise for twenty minutes every morning. [to-infinitival clause]

Doing that helped me recover.

We started exercising for twenty minutes every morning. [gerund-participial clause]

We kept this up for two years.

Bob asked whether I exercise for twenty minutes every morning. [interrogative content clause]

It was an easy question to answer.

Steve told me what a healthy habit exercising for twenty minutes every morning is. [exclamative content clause]

It really surprised me!

'To eat fish' cannot possibly be the object of 'like', and is not a noun phrase. Any source claiming otherwise is ignoring the clear syntactic facts enumerated above.

The proper analysis for the structure of this clause is presented in BillJ's answer.

As the original question does ask whether 'like to eat fish' is the object, the same arguments apply for that as well.

Not the answer you're looking for? Browse other questions tagged objects direct-objects or ask your own question.