What do you call the floor-level space that allows someone to traverse from one floor to another with stairs?

In French it's called a trémie,. This element is unlikely to be a hopper or funnel. What is it called in English?

Would "Stairs aperture" be good enough for people to understand? 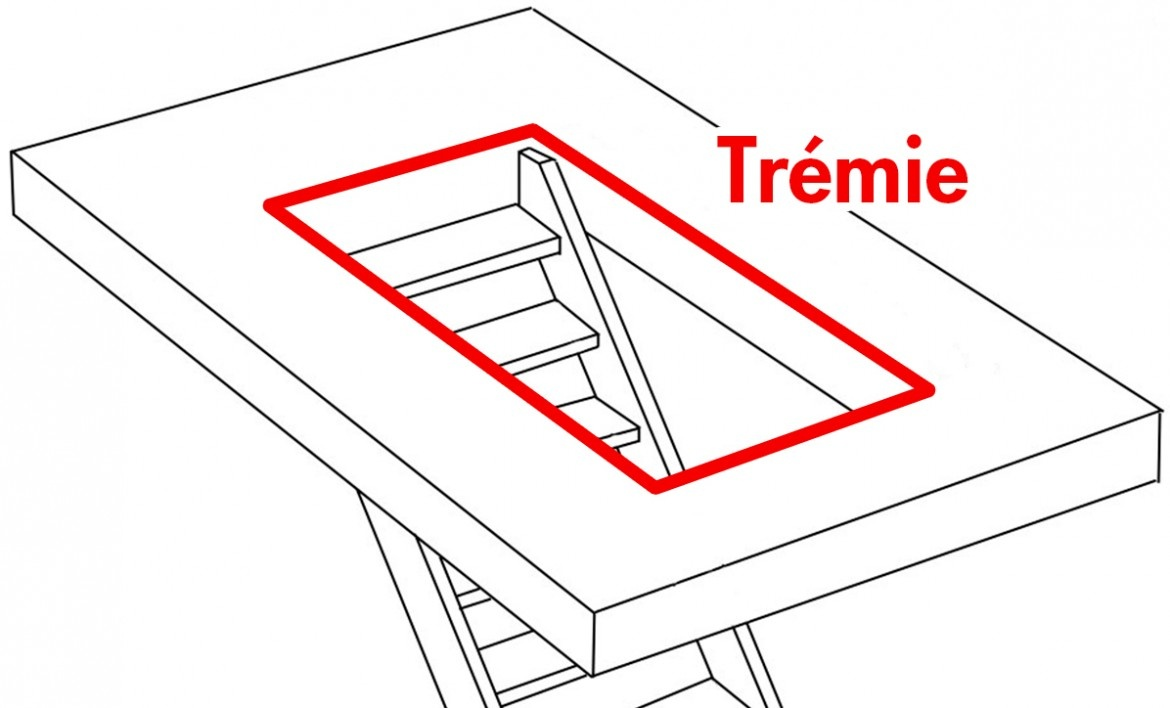 This is a slab opening, or a floor void

In construction, a floor void is typically a vertical opening or hole that is left in the floor construction either to accommodate services, or allow the installation of a staircase or, as an aesthetic feature.
www.designingbuildings.co.uk

A trémie is a hatchway.

Originally and chiefly Nautical. A square or oblong opening in the deck of a ship providing access to the hold and through which cargo or other items may be lowered (= hatch n.1 5c); a similar opening forming a passageway between decks.

3. An opening in the floor, ceiling, etc., of a building, which may be closed with a trapdoor or hatch.

2010 Portland (Maine) Press Herald (Nexis) 20 Sept. a1 I had to stay near the hatchway to the attic. At one point, I clumsily knocked into the heavy hatchway door, and it bonked me solidly on the head.

Hatch is to hatchway as door is to doorway.

My French is not great, but it's good enough to recognize that you are using the trémie corresponding to this definition from the Larousse dictionary:

That clarifies that it is indeed the opening in the floor that you are talking about, not the stairs, not the floor near the opening, not the framing of the opening, etc.. That's consistent with your picture, description, and suggestion of "stairs aperture", too, so you may be wondering why you've received such a diversity of answers. The thing is, this is a concept for which there is no term in common use in English (or American English, at least). In fact, in more than half a century of communicating in English, I have never discussed such an opening specifically or heard it mentioned.

Perhaps there is a technical term for it in the field of architecture or building, but if so, then the Larousse has not found it. Its French / English dictionary translates "trémie d'escalier" as "stairwell", but a stairwell is not just the opening in the floor, but rather the whole volume in which a stairway is set. Perhaps bare "trémie" would be understood differently, but the Larousse doesn't offer an applicable translation for that.

If I had to convey this specific idea, then I would probably say something along the lines of "the opening from the second floor onto the stairs". If I felt obligated to be more brief then "stairway opening" might do, but that would depend on context to communicate which of at least two openings I was talking about. And even then, unless the audience had in mind the particular unusual kind of stairway depicted in the question, I think there is a risk that they would get the idea of a vertical opening (into the stairwell from the side) rather than a horizontal opening in the floor.

If I had some flexibility then I would look for a way to avoid referencing the opening itself in the first place. It would generally be more natural to express an idea in terms of the stairway or the stairwell (if any) in which it is set than to talk specifically about the opening in the floor that serves the stairway. For example, I would not warn someone to avoid falling through the opening, but rather to avoid falling down the stairs.

Floor opening is the term to use. Much of what follows was written before I reached that conclusion, thanks to Lambie's comment below.

I do technical and other translations French to English for a living, funnily enough.

I have come across trémie and trémie d'escalier in the course of my activities. A great resource for such questions is Google Images (search on google but then click the "images" tab).

From the picture you have given I would instantly say something like "loft hatch". But then you say "pass from one floor to another". If the upper floor in question is not a loft, but a normal floor, the question becomes more tricky. I'm not convinced that there is a simple term for that in English, although architects might just possibly have a specialist term they use.

And the reason for that is apparent to me. I have so rarely seen a building, any building, either in the UK or for that matter in France, which uses an arrangement as in your picture, to pass from one floor to the next, that I immediately assumed that the upper floor was a loft. I'm not saying it doesn't exist, just that it's rare (and rather impractical, probably resulting in people banging their heads rather a lot).

I don't think trémie d'escalier always means that specialist and unusual idea (of a floor opening between two normal floors) in French.

If you are looking for the opening in the floor between levels, it is indeed the aperture or opening (PDF link). I was unsure of this (empty space doesn’t tend to have many specific names in architecture).

In this case it is the stairwell aperture or stairwell opening.

A hole that sinks below the ground or floor is called a well (Wiktionary: Noun #10).

As a native U.S English speaker, I would find it most natural to call it the “stairwell opening”.

That's a hole. In the floor. For a staircase.

Depending on the linguistic register one is speaking or writing in, some people might also call that an opening, which is also perfectly fine. The words "hole" and "opening" are essentially synonymous and almost entirely interchangeable in English.* Their only difference is whether one prefers to use a common and crude monosyllabic word or a more refined and educated sounding trisyllabic one.

*) At least, that is true when those words are used to refer to a gap, passage, vacancy, absence or some other similar feature in some concrete or abstract thing. The word "opening" can, of course, also be used to refer to the action of becoming or making something open, which is only tangentially related to its other meaning and has no such synonym.

This is a scuttle, or access hole. It would also be understandable to call it a "stairway opening", as Dúthomhas suggested. (Stairway aperture is technically correct, and possibly intelligible, but very non-standard.) You could equally well call it a passageway, but that term would not imply the existence of stairs.

The French word "trémie" has no currency as an English loanword and would not be understandable to English speakers. While "hopper" and "funnel" are both English words, no English speaker would imagine this drawing when hearing either of those words.

Depending on the use (eg if it is in literature), the phrases "up/down through the stairs" is mostly likely to naturally convey of an object/person in this position. For example: "halfway down the stairs, she turned and looked back at the man on the floor above her".

I would think that "portal" would be more generic than hatch, hatchway or doorway and a little more appropriate than "hole".
Etymology of Portal

The part labeled in your picture is called the nosing, specifically the landing nosing.

The nosing is the wood that trims any part that has a vertical drop. Beneath it is the apron (between floor and ceiling) or the riser (between the treads of each step).

I suppose it is so named because it pokes out a little like the nose does from the face, but it has the practical purpose of protecting edges from damage as well as rounding them to inflict less damage to people when they fall on / trip into / impact them.

Not all nosing actually has a rounded nose, BTW. For places where a door closes to join with the flooring it can be perfectly square.

3 : a level part of a staircase (as at the end of a flight of stairs)

For trémie, wordreference.com offers stairwell in addition to hopper. But that would be the entire vertical space occupied by the stairs.

It's clear from all the other answers that this should not be the accepted answer, and that landing and staircase/stairwell aren't what is meant by trémie, which seems to refer to the hole. (Jack O'Flaherty, 11/14/2020)