Is there a verb "refactor" meaning "doing refactoring" in English?

Code refactoring consists of changing the structure of the code without changing its functionality. The term refactoring is currently used by software development industry to refer to this process.

But what about the verb refactor? Does it exist in this context? Can I say, for example:

After two weeks, I finally refactored the code of this library.

Tell the management that we can't work on the spaghetti code like this. We must refactor it first, which will take a few months.

This is most likely a case of dictionaries having not caught up with an industry's lingo or jargon. Here are a few examples of using refactor:

You can also refactor other things besides formal expression languages. Like DocumentRefactoring. I refactored this definition several times in order to group similar ideas into their related paragraphs. Of course, I call that reorganization. It's all similar (except where it's different). (source)

Refactor mercilessly to keep the design simple as you go and to avoid needless clutter and complexity. (source)

These examples were found with ten minutes of searching.

In addition to the above, my own personal experience around programmers suggests that every single programmer who knows what refactoring is will understand what refactor means. Furthermore, Visual Studio's refactoring menu actually calls it refactor: 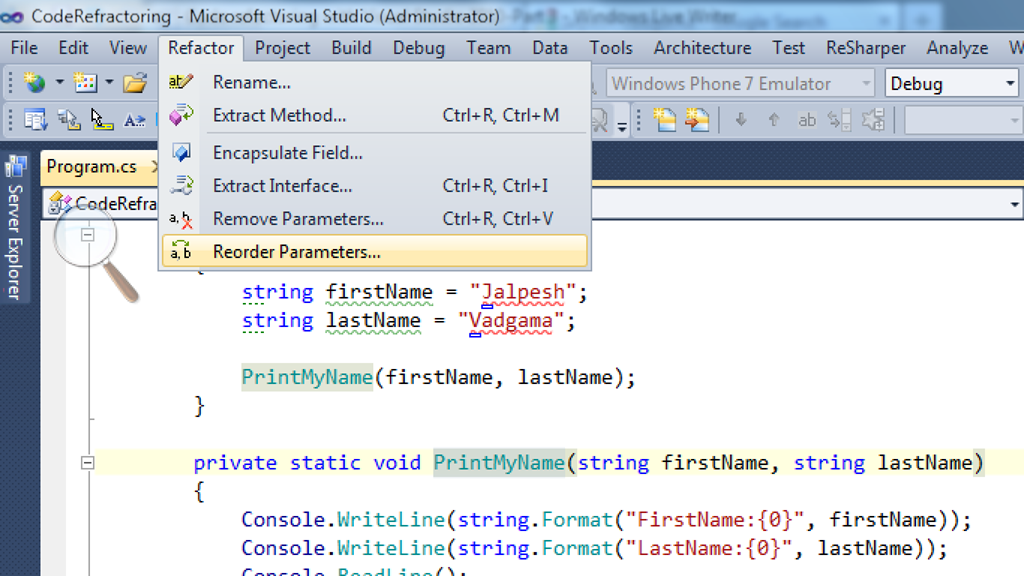 Yes, refactor is the verb. This is actually elementary English grammar: refactoring is nothing more than the gerund (noun form) of the verb refactor, formed by adding the suffix -ing. In other words, refactor came first, and refactoring derives from it.

It comes from the prefix re + the verb factor, from the mathematical sense of the verb. When you factor an expression in mathematics, you change its structure without changing its value, e.g. x^2 - y^2 = (x + y) * (x - y) or 6x = 2 * 3 * x, either to express it more simply or to expand upon it so it is easier to do work upon it.

In a program itself, lets say you have two functions which repeat several bits of code between them, like lets say they both contain the code necessary to open a database connection and query the database for whatever information they need. This is like the 10 in 2 * 10 * x. So, you refactor that code out of each function and into its own function which the other functions call rather than repeating the code twice over.

Not the answer you're looking for? Browse other questions tagged word-usage orthography is-it-a-word or ask your own question.

20
Is "administrate" a valid English verb? What's the difference between it and "administer"?
8
Is “outpander” a received English word? Can “out” be used to any verb as one likes?
7
Is "tri-quarterly" a real English word meaning 3 times a year?
3
Is there a valid English word for "playability"?
1
A verb meaning "to make fail"?
4
Code vs. Coding
0
'In' as a verb - meaning (lands inned)