What does "Hamlet stool" mean?

I have read this in Maugham's "Theatre":

She wrote her letters at a satinwood desk, seated on a gilt Hamlet stool.

What does it mean?

I have googled it and found tens of images and no formal definition. As there are so many various images, with 3 legs and 4 legs, with and without back, high and low, I really cannot understand what exactly does it mean, what kind of chair it is and why it is called so, what is its relation to Hamlet.

Curule. Among the Romans, a sort of folding stool without a back, conveyed in a chariot, which only the chief magistrates were permitted to sit upon; sometimes called "Hamlet stool". A. C. Passmore; Handbook of Technical Terms Used in Architecture and Building and Their Allied Trades (1904)

The photographer's first duty is the production of a likeness...and the face and clothed figure of the client should be considered before the Grecian pillar or the Hamlet stool.
...
Hundreds of books have been written, and endless controversies waged round the subject of hamlet's mentality. There can be little doubt about his state of mind, for a youth spent among Hamlet stools would make anyone dotty. J. Effel; "With a Portraitist in the Studio," Bulletin of Photograpy, p.708 and p.710 (1922)

In the drawing room there were occasional chairs, settees, Juliet seats, Hamlet stools. L. W. Peat; Grandma Did it this Way (1950)

This sort of undifferentiated recycling of stock material from a theater's warehouse was stoutly opposed by the romantic theorists of the early twentieth century and by the realists who followed them, both of which envision a stage in which every element would be selected to contribute to the total artistic vision of each production and not utilized again. Nevertheless, custom and economy made this a vision unrealizable for most theaters. Even at the end of the nineteenth century, Nemirovich-Danchenko, Stanislavsky's codirector at the Moscow Art Theatre, reports that the sort of properties Wilkinson might have call "old-acquaintances" had by no means disappeared. Moreover, audiences had become so familiar with certain of these that they, like certain actors associated with particular types of roles, brought with them certain expectations with each new appearance. Thus, Nemirovich-Danchenko reports, a certain tall lamp with a yellow shade became associated with "cozy love passages," while a curule chair in a "Gothic/Renaissance style," was in fact referred to by at least one director as the "culture chair." Marvin Carlson; Shattering Hamlet's Mirror: Theatre and Reality

If we search for the word "stage" in the novel (Theatre) using the PDF document linked in the question, there are 70 instances. The name Hamlet is mentioned 8 times:

I haven't read the story but it appears to be centred around an actress whose ambition is to play the role of Hamlet on stage. It's my assumption that the gilded stool refers to a rather expensive-looking stool the theatre used as a stage prop in the play Hamlet. In this instance the "Hamlet" is a (proper) noun adjunct acting as an adjective.

On Google images I searched for "19th century gilt stool" as the story was first published in 1937. It is possible that the stool in question resembled the one below; it is British-made and certainly looks theatrical. 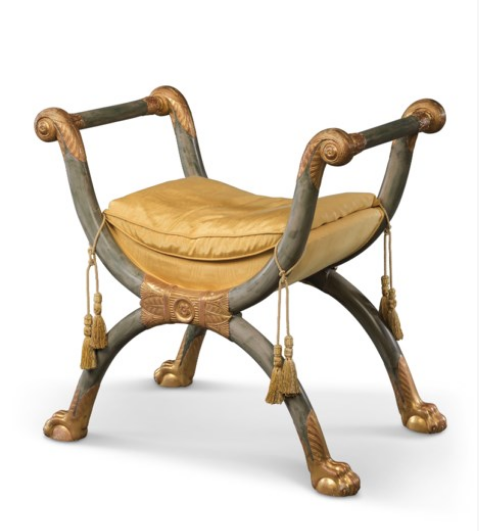 Not the answer you're looking for? Browse other questions tagged meaning books or ask your own question.

5
Reason for the strange meaning of "for any length of time"?
2
What does “to quorble a stank at” mean?
10
What does the initial fragment of The Hitchhiker's Guide to the Galaxy mean?
0
What is the meaning of 'Oshkosh by Gosh'?
15
Does "goodly" in this sentence in Hamlet mean "considerable" or "pleasing?
0
What does "secret handshake" mean in the context?
0
Does "no" mean "I agree with you"?
1
What does it mean to "have an air of importance"?
0
What does "whisper thin" mean?