Is "600% smaller" correct use of percentages?

This doesn't make sense. I can understand 600% larger (it is 6 times larger), but not 600% smaller. If it is acceptable English, what does it mean? 1/6 the size? I am seeing this construct more and more often.

This statement is likely correct about whatever file format you're talking about. To understand why, you have to look at the savings as a ratio.

It is meaningless. Something cannot be more than 100% smaller.

It would be like having a pint glass full of beer and then pouring away 6 pints of it!

It doesn't make that much sense, but it often means "six times smaller" than a reference item. If a deer is 600% larger than a dog, then some people might imagine that a dog is 600% smaller than a deer, if they don't fully understand how percentages work.

600% smaller when compared to GIF

It doesn't make a lot of intuitive sense, but I assume the authors here are merely just trying to create an effect on the reader. This is slightly off-topic for English Stack Exchange, but from a mathematical perspective: 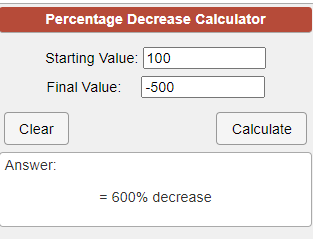 ^For those who are suspicious of the math

I think people will use these two terms mainly on the conditions I mention. The ambiguousness, of course, is infuriating. I'd stick to saying "x% of the original" and, on the unfortunate cases where people use such terms, assume logic 1 for x<100, logic 2 for x>200 (and even >100 with a heavy heart).

No, it is not a correct usage.

Calculating percentages is taught in primary school. It is not a matter of subjective interpretation, and does not depend on language. If GIF is 600% larger than X, then GIF's size is 700% of X: 100% of the original size of X, plus 600% the size of X; in other words, 700% or 7 times larger than X. Then, X is:

"600% smaller when compared to GIF" sounds like the author wanted to sound smarter than he/she really is, went a bit above his/her educational and/or intellectual "pay-grade", and voiced out a statement that makes no sense.

Such a statement might have made sense in some context where negative values were valid; however, the size of computer files is not such a context because their size is never negative. In this case, no matter of creative misinterpreting coupled with Olympic level mental gymnastics could make sense of that statement.

This doesn't make sense. I can understand 600% larger (it is 6 times larger),

Style guides strongly suggest not using constructs like "X% larger" if X is greater than 100 because it is not consistently understood by English speakers.

but not 600% smaller. If it is acceptable English, what does it mean? 1/6 the size? I am seeing this construct more and more often.

It might be understood to mean 1/6th the size. But I think many English speakers would find it confusing. No editor or proofreader would permit such a construct to pass unless it was in a mathematical context where its meaning was clear.

One confusing matter is the use of 'smaller' instead of 'lesser' in the question: Whereas 'small' and 'large' lend themselves to the notion of magnitude (absolute value close to zero versus greatly positive), 'lesser' and 'greater' than denote the distance to the left versus right on a number line. As such, the former lends itself more to a multiplication interpretation than does the latter which is a simple addition. That said, there are much clearer ways to express a shrinking or growing in "in scale" instead of linearly (e.g. simply "shrunk to one-sixth of its size"). If wanting to express a scaling-down or up sense in terms of a percentage, then to say that "x became 600% smaller" (instead of "x loss 600%" reversing sign). I'm not sure, but I think it doesn't make sense without comparing it to a preceding reference rate. "x shrank to 1/6" which equates to "x became 16.666..7% x" or "x↦0.16666..7 (x)" as a decimal. As used colloquially, "600% smaller" likely is intended by the person to mean "six-times smaller", which could be taken to mean the inverse of "six-times larger", i.e., one-seventh the original.

This is a common confusion of the terms 'smaller than ...' and '.. as small as ...' - taken exactly as stated, it isn't actually meaningless as some have suggested, but 'smaller than' means you subtract something - IOW, you have 100% ans subtract 600% and end up with -500%, which is mathematically possible, but perhaps not realistic.

There's no way that I can see to describe something as "600% smaller".

I think that even the people who interpret "600% smaller" as "six times smaller" are using a form of words that's meaningless. By this I mean that, if this interpretation is applied consistently, then "100% smaller" means "one times smaller". Does that mean original size? If so, we can all make a lot of money as business consultants by promising clients a 100% reduction in expenses.

TL;DR It's a phrase that is used to make something sound more sensational. In other words, you might call it "Marketing Drivel."

I am an engineer. I do a lot of math. I understand the concept of "600% smaller." The exact definition cannot be pinned down, because the definition of "600% larger" varies.
600% larger could be "6x" or "7x", depending on your reference.

To address the question, consider:
I have a desktop computer. It has a volume of 3.5 cubic feet.
I replaced it with a cell phone that, according to the manufacturer, is 600% smaller than my desktop computer.

Is my cell phone 1/6th or 1/7th the size of my desktop?
We could argue this until the cows come home.

Since I am in the United States, I could measure the volume of both, compute the difference in size, and if I get a number smaller than 600%, I could sue the manufacturer for false advertising. In that scenario, they would have to prove they were correct. Their math would show that they were right, because there is no specific standard on what 600% smaller means.

What the phrase really means:
It's a whole lot smaller! But, that isn't as exciting in a commercial, so they say:
Our new cell phone is SIX HUNDRED PERCENT smaller than your desktop computer!

In summary, IMHO, it's all nonsense. Don't get caught up in the minutiae of what it actually means. It'll make your head hurt.

In general, however, you should try to avoid the phrases "percent larger" or "percent smaller", in favor of more specific and less ambiguous verbiage - especially when dealing with percentages that are whole number multiples of 100, since those can simply be expressed as "n times", where n is the whole number multiple in question (e.g. "six times" rather than "600 percent").

Not the answer you're looking for? Browse other questions tagged percentages or ask your own question.

5
Prepositions before and after percentages
7
The meaning of 0% and 100% as opposed to other percentages?
3
Articles before percentages earned?
2
Science Writing: Placement of Percentages and Numerical Raw Values
0
Difference between 'at' and 'by' for percentages
1
Percentage comparison to/by/of/in