I don't seem to find any difference between the first set and the second.

The vowels in the pairs are spelled very differently and the links say they are different but I can't hear any difference.

Is there a difference?

No, the sounds of [a] and [ʌ] are not pronounced the same. But you’re taking dictionaries much too literally here. They aren’t meant to be used that way.

Please take dictionary pronunciations with a grain of salt. Their intention is to indicate to native speakers which phoneme is used. They do not represent exact phonetics suitable for non-native speakers. It isn’t possible to do that in the space allowed, or with the nuance needed.

Two different publishers will frequently make two different choices of representation for the same phoneme. For example, Oxford uses /rʌɪt/ for all of the UK and /raɪt/ for all of the US. Cambridge uses /raɪt/ for both. Neither of those is what people really say. Those are merely broad conventions. They could quite possibly represent the very same thing even though written differently under different conventions. That’s what’s happening here.

For what people really say, you should look at, and listen to, these pronunciations of the word right. Notice that:

Also notice that nobody there except for some of the Scots and Welsh actually has that /r/ that you found in the dictionary you looked in; most of us have merely [ɹ]. That should tell you how inaccurately these dictionaries are showing things to you! (The [r] sound is the fully rolled or trilled R that a native Spanish speaker uses speaking Spanish with words that start with R like rata.) The vowels in a dictionary are in general no more accurate than this poor mangled R consonant — sorry. They only represent very loose conventions.

Listen to these to hear the real differences between vowels in various dialects:

One other thing is that from your last name, it’s possible that you’re a native speaker of Spanish or Portuguese. If this is the case, these two sounds may be hard for you yourself to hear being said differently, especially when they’re close the way they are in allophonic variations of the same underlying “ai” diphthong.

Consult this handy table, IPA chart for English dialects and look at the lexical sets for STRUT and PRICE. These two rows correspond to your two examples, 'write' and 'up', in the two primary standard dialects of English, BrE and AmE. The rows are /aɪ/ and /ʌ/.

Comparing the two rows you can see that though the GenAmE and BrE columns show different vowels, many of the other dialects show much more similarity. 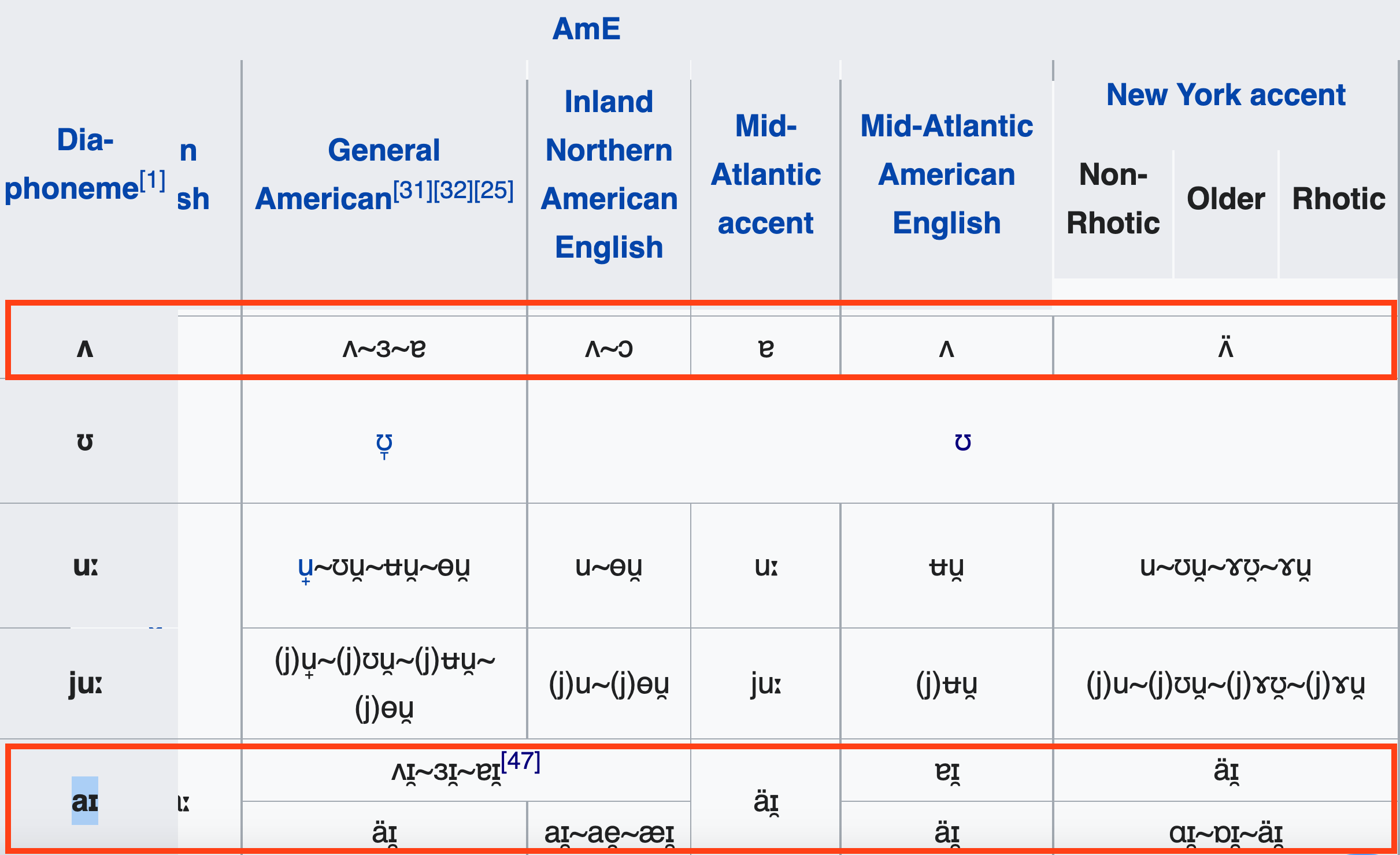 looking at the GenAmE column, the two vowels are specified as exactly the diaphone labels for the rows. But the alternate given on the PRICE /aɪ/ entry, affected by Canadian raising gives a pronunciation of /ʌɪ̯~ɜɪ̯~ɐɪ̯/ which is just a diphthongized version of /ʌɪ̯/. This effect is not universal among GenAmE speakers (and is not standard) but it does occur enough. And by inspection you can see lots of other (non-American) dialects where the two vowels are similar.