Origin of the expression "Get stoned"

My daughter asked me a question in the car the other day, and I didn't have an answer. She asked me about the origin of the expression "get stoned" (i.e. with regards to drug use), and how it might be related to "stoning".

Many such slang terms originally meant damaged, badly affected (for example, trashed, smashed, blitzed, hammered, wasted...). It's true stoned is more often used nowadays for intoxicated by cannabis, but it too was first used of alcohol — originally in compounds such as as stone-drunk, stone-cold. First recorded as a single word in print in Hepcats jive talk dictionary (1945).

The term may relate to stoning as a method of execution — and many things can be damaged by stoning (not least, windows), so "execution" may not be central anyway. But I'm more inclined to see it as from the insensible meaning of stone blind (late 14c., lit. "blind as a stone"), stone deaf, etc.

Stone-drunk can be found in a story in A Cracker Bon-Bon for Christmas Parties (1852). The story is called “How The Last Act of Hamlet was Written” and describes a William Shakespeare who's been drinking for three days:

“Will,” said the Earl of Essex, “get up!”
“Go hang!” was the only reply.
“He's stone drunk!” said the Earl.
“… ours is a house of entertainment, and we couldn't refuse him liquor while his money lasted. …”

A 1952 Life magazine has an article about “That Crazy Bop Joke Craze”, “With Glossary one can understand, if not appreciate, musicians' gags”. It shows these earlier jazz and bebop slang terms were becoming mainstream. 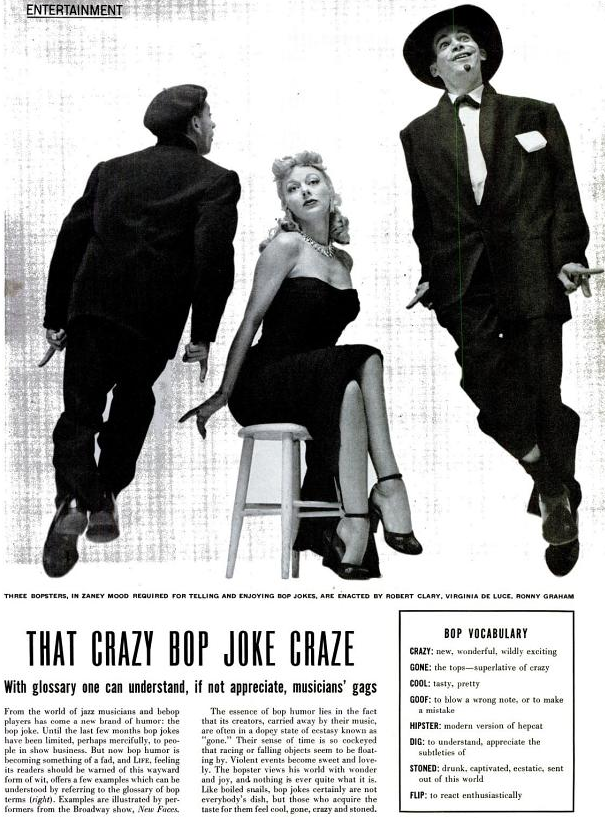 From the world of jazz musicians and bebop players has come a new brand of humor: the bop joke. Until the last few months bop jokes have been limited, perhaps mercifully, to people in show business. But now bop humor is becoming something of a fad, and LIFE, feeling its reader should be warned of this wayward form of wit, offers a few examples which can be understood by referring to the glossary of bop terms. ...

The esence of bop humor lies in the fact that its creators, carried away by their music, are often in a dopey state of ecstasy known as “gone.” Their sense of time is so cockeyed that racing or falling objects seem to be floating by. Violent events become sweet and lovely. The bopster views his world with wonder and joy, and nothing is ever quite what it is. Like boiled snails, bop jokes certainly are not everybody's dish, but those who acquire the taste for them feel cool, gone, crazy, and stoned.

STONED: drunk, captivated, ecstatic, sent out of this world 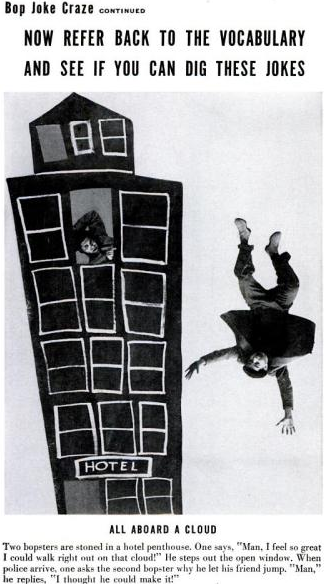 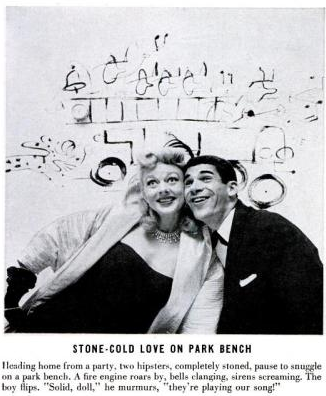 Two bopsters are stoned in a hotel penthouse. One says, “Man, I feel so great I could walk right out on that cloud!” He steps out the open window. When police arrive, one asks the second bopster why he let his friend jump. “Man,” he replies, “I thought he could make it!”

Heading home from a party, two hipsters, completely stoned, pause to snuggle on a park bench. A fire engine roars by, bells clanging, sirens screaming. The boy flips. “Solid, doll,” he murmurs, “they're playing our song!”

Though I am of Spanish/English/Dutch ancestry, my hardcore Italian-American friends all say that the oldest mentions they remember came by way of elder members of their families on the US East Coast - grandparent, great-grandparents, etc. - who explain that the word derives from the Italian word "stonato." Though the first definition in most dictionaries will be "out of tune/dischordant," it also means "confused, foggy, bewildered ('stonato/confuso')." This eventually became "stonat" (stoh-naht') due to the Italian-American phonetic custom of dropping the final vowel/syllable, (spaghett', mozarell', andiam', ricott', etc.) which eventually mutated to "stonad:" "Don' 'a listen to him, he's 'a stonad." From there it was a hop, skip, and a jump to "stoned," though initially it referred only to a state of alcohol-induced inebriation. I can remember being a teenager and giggling at my Dutch grandmother Nina when she declined more brandy during a Christmas celebration claiming to already be too "stoned." Hey, I grew up in southern California in the '60s-'70s, what can I say?

We see a similar progression of the southern-Italian/Sicilian variant of the same word: "stunato," which of course, to anyone who's ever spent any time in New Jersey, NYC, etc., became quite famously "stunad," meaning (similarly) "stupid, lame, out of touch," as in "I ain't gonna stand he-yuh while some stunad is screamin' in my face!"

I am not claiming this to be unequivocal, however, it is the only "etymology" I've heard that wasn't pure speculation; for all the "stoned derives from stoning" explanations I've seen nothing ever connects the two. Even in the etymology dictionaries the two are simply listed together as disparate meanings of the same root word, no links are drawn. If nothing else this is a more colorful origin, if not definitive.

I don't see any connection to stoning as in execution.

My suspicion is that the etymology will always remain clouded in smoke. I'd say that it developed as a means to describe the drug induced stupor that was a consequence of consumption of drugs such as opium and cannabis.

The term may have been coined on either side of the Atlantic, among gentlemen users of opium, or among petty criminal, cannabis smokers of North American city streets.

It seems clear that the term was a euphemism for the state of intoxication and oblivion into which the drug user would fall - having some qualities not dissimilar to a stone in its lack of consciousness of and responsiveness to the world around it.

I think the phrase in question does refer entirely to being stoned as a result of people throwing stones at you. Just imagine a person staggering as they try to walk after having been hit a few times with stones. Staggering while walking is often a result of drug overuse.

I always thought it related to the band The Rolling Stones because they constantly used drugs.

user59705user59705
1
2
Add a comment  |
Highly active question. Earn 10 reputation (not counting the association bonus) in order to answer this question. The reputation requirement helps protect this question from spam and non-answer activity.