How is a value that's not a percentage referred to [using an adjective]?

A rating of 70 % is percentual (is that the correct English adjective for percentages!?). What is the value called when the rating is a 7 (out of 10)? I'm searching for the adjective.

A little background: The user can choose which type he enters on a website and I need to label the options in a dropdown.

7 out of 10 is an example of a numerical or numeric rating. The adjective refers to the fact that the value is a simple numeral, rather than relying on words (e.g. verbal scale), symbols (star rating), percentages, or other forms.

Here are some examples of the adjective in use:

Numerical rating scales are based on the assumption that there is a true zero-point and may be presented graphically as lines [...] or boxes [...] with their boundaries clearly defined as the extremes of the feeling from "none" to "worst possible" (Pruritus [dermatology book describing a numerical scale for pain after having described a verbal scale, 2010)

And this is a snapshot from Textbook of Nursing Education giving examples of three kinds of rating scales. The "Numerical Rating Scale" uses numbers tied to a value: 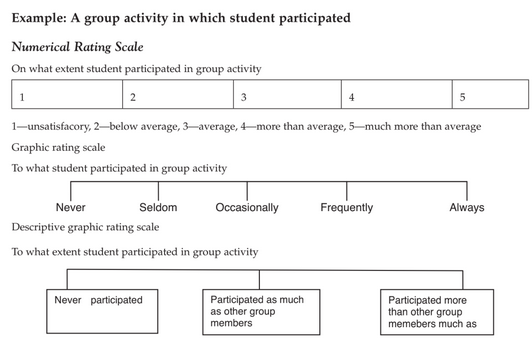 Seven what out of 10? Marks/points/correct answers? - This will tell you what "7" is.

Otherwise, it is an ordinal scale

In the alternative, we have the "moh scale" for measuring the hardness of minerals. The scale is arbitrary and varies from 1 to 10. Talcum is 1#, Diamonds are ten. This is known as "a qualitative ordinal scale."

The Mohs scale of mineral hardness (/moʊz/) is a qualitative ordinal scale, from 1 to 10, characterizing scratch resistance of various minerals through the ability of harder material to scratch softer material.

A range for choices is called a Likert Scale.

A Likert scale is a close-ended, forced-choice scale used in a questionnaire that provides a series of answers that go from one extreme to another. For example, a scale might have five choices that start at one end with "strongly agree" and end at the other with "strongly disagree," with less extreme choices in the middle three points. Likert scales are widely used in psychology and other social science research.

It bears some attention that the scale (when used for econometrics or statistics) must be directional (like "strongly disagree," "disagree," "neither agree nor disagree," "agree," "strongly agree"). A Likert scale can't refer to non-directional choices (like "red," "blue," "green").

You could refer to individual values, choices, or perhaps responses. Some scales have units (e.g., Rotten Tomatoes); however, in general a rating scale does not. Individual scales may have an implicit label: Rate your satisfaction on a scale of 1 to 10. I would say the values on these types of scales are usually unitless. As the other answer explains, we refer to the range or scale of, say, 1-10. So range of values for the collective.

The pH scale gives values as high as one-tenth (10-1) of a mole of hydrogen ions per liter, to values as low as one hundred-trillionth (10-14/) moles per liter. ref

On the whole, a Likert item is simply a statement that the respondent is asked to evaluate by giving it a quantitative value on any kind of objective dimension, with a level of agreement and/or disagreement being the dimension most commonly used. ref.

The scale should be able to differentiate between the levels of satisfaction on the various elements in the scale. Job Satisfaction Scales for Effective Management

EA's answer prompted me to look for an adjective, if that is a necessity for the OP:

This scale measures the learners' preference for well-ordered vs. ambiguous approaches to solving problems and managing details (12 items; Likert-type 6-point scale). This is a unitary scale (sample items: “I don't like situations that ... Performance Improvement Quarterly (2006) p.71

The only adjective I've found that is even a reasonable fit is gradational.

Wiktionary lists the required sense second in its listing:

where the relevant sense of the noun gradation is

grading: arrange[ment] in a scale or series [Merriam-Webster]

Not the answer you're looking for? Browse other questions tagged adjectives terminology or ask your own question.

3
Adjective describing things that can be given value
0
Less technical term to describe how often a recurring schedule repeats itself?
2
"Potential," "wanna-be": what's an equivalent for "should-be"?
3
What is the correct adjective suffix form for tropism?
2
Adjective for person with learning disability?
1
Adjective or noun for "uses rules that are commonly accepted even if not consistent"
0
Is there a specific term for "tone of command" in English?