Is there a word to describe something that's perceived to be funny or clever only because it makes a reference that appeals to a certain group?

"What do you say when you see an empty parrot cage?" "Poly-gone"

It's funny in the way that bad puns are, but it had a sense of novelty when my grade school teacher told it shortly after we started learning geometry. The pun was relevant then, the concept it referenced was on the cutting edge of the classrooms knowledge. Now that I'm older and take the definition of a polygon for granted, the novelty of the reference is gone. Even if I'd never heard it before and it was presented in the proper context for a geometry pun (whatever that would be) it wouldn't be the same. I could say that I've become jaded to describe how I feel about the pun now, but is there a word to describe the original impact?

Edit: To clarify, I'm not referring to the fact that the pun wouldn't have been funny unless I understood it, like with an inside joke. I'm looking for a word to describe a concept that is perceived as being novel lending it's novelty to an otherwise uninspired joke or statement which references it.

Edit 2: A better example would be a remark about a current event. For example, if I was to watch a current episode of the Daily Show, it would be funnier now than it would a year from now even if I clearly remembered the news items that were being satirized. The jokes are funnier because I find the topics, which are not funny per se, interesting.

Edit 3: Another way of saying this would be a joke that is funny because it aligns with my interests. In the original example, students who were in the same class but found math boring would have found the pun boring, even though they understood it just as well.

Mostly when we "outgrow" jokes we call them "childish". But in the more general case it's called an in-joke - a joke that is appreciated only by members of some particular group of people.

An in-joke (also known as an in joke or inside joke) is a joke whose humour is clear only to those people who are "inside" a social group, occupation or other community of common understanding; an esoteric joke. It is humorous only to those who know the situation behind it.

an inside joke/high context joke

An inside joke is also sometimes called a private joke. The concept of this type of joke is that only a select number of people inside a certain social group understand the joke's meaning. Therefore, those on the outside of the group that understands the joke usually don't have any clue as to what the inside joke actually means. An inside joke is often just a word or a phrase. 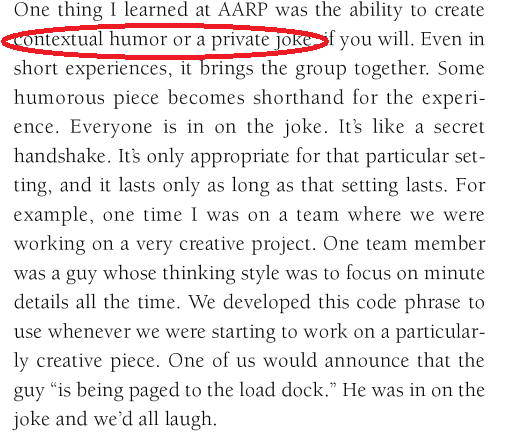 In Australia we call it an 'in joke'. That's probably not the official term for that type of joke but it's common here in casual speech. Imagine that you're at a party with your cousin and his/her group of friends and one of fhe friends says something like your example and they all start laughing. You look at your cousin in confusion because you really don't understand what is funny about that which was said. Your cousin may say to you, 'oh don't worry it's just an in joke'.

The fact that it's an in joke doesn't necessarily mean that it's exclusive and you cannot be involved. Quite often it just means that it's a silly joke and you probably had to be there to understand - it might be too hard to explain of not worthy of an explanation.

Those are topical jokes:

top‧ic‧al: a subject that is topical is interesting because it is important at the present time

1
Idiom about tackling smaller problems instead of tackling the root