Does the word "chevronman" make sense?

I am looking for a good English equivalent of an obscure military term. It was in use by the Royal Hungarian Army between 1920 and 1945. No other army ever had a similar concept, and it's obsolete now.

The original word is "karpaszományos" which translates as "person who wears a lace on the sleeve of his jacket". It used to mean a special class of enlisted soldiers who were distinguished by a "lace", a thin, embroidered line on their jacket sleeves.

The meaning of the lace was that the soldier passed high school, which was a fairly high academic achievement at the time. However, being a "karpaszományos" didn't mean rank. It merely indicated that he was more educated than the other rank and file men. They enjoyed some privileges during their military service, they could go to NCO courses, and at the end of their conscripted service they could sign up for officer school to become professionals. But in itself, without choosing one of the above options, a "karpaszományos" was little more than any ordinary grunt.

So the lace, in itself, it did not mean or indicate:

The term "karpaszományos" was also used when addressing them, similarly how an officer would shout "Private!" to a soldier whose name he didn't know.

I've been struggling to translate this term to English. Recently a friend called my attention to the French term "soldat chevronné". It's a very different concept, it means a soldier decorated for military achievements. Along the same lines I came up with the term "chevronman".

I understand that the meaning will still need explanation, probably in a footnote. But linguistically it doesn't seem wrong. What do you think of "chevronman"?

No, as far as I know, there is no similar word to describe a military person's high school graduation 'on their sleeve' in some form of flash or insignia

However, In the US Navy, there is the slang term:

Since at least the late 1960s, it has been used to indicate a recruit that has been pushed through the ranks based on AP High School studies and/or under-grad studies.

The flashes were more or less obvious when incorporated into the simple chevrons, something that other answers have ignored. Only 4 ratings could hold that ranking at the time. This is an example of my EM-4 patch that I sewed onto my dress-whites after graduating Basic Training. 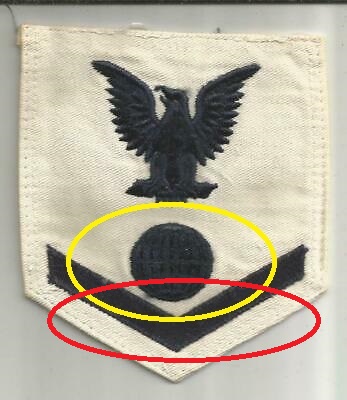 The term is being used recently to indicate grads entering military service immediately with rank as Captain.

The Navy is one step closer to recruiting officers with much-needed skills into the service and immediately promoting them to a pay grade up to captain ― O-6 ― without any prior military experience.

The meaning of the lace was that the soldier passed high school, which was a fairly high academic achievement at the time. However, being a "karpaszományos" didn't mean rank. It merely indicated that he was more educated than the other rank and file men.

It was in use by the Royal Hungarian Army between 1920 and 1945. No other army ever had a similar concept, and it's obsolete now.

Trying to find an official term for this is probably an impossible quest.

No, chevronman would mean a man who works for Chevron, if anything. Most people would just draw a complete blank.

The usual tack for English would be to just figure out the roughly equivalent rank or calque the differences (1, 2, 3, &c). That seems to be what happens here in the only source I can find that's online and mentions the whole term karpaszomanyos, Leo W.G. Niehorster's The Royal Hungarian Army: 1920–1945. He glosses it as "braided" since it's just an adjective used to describe the actual ranks.

Theoretically, you could also just use the untranslated foreign term. It's a bit long, though, and the -sz- makes it less helpful.

For what it's worth, the poster here also offers that The other reason for such distinction was that the Hungarian society was still a half-feudal segregated one... [a]nd the ruling class just did not really want see working class NCOs giving orders to aristocrats of lower military rank... [a]nd obviously the children of the higher class had better access to higher education, too, so when entering the army they became karpaszományos with the afformentioned privil[e]ges. Also, karpaszományos soldiers had a uniform similar to officers, even though technically they were not neccessarily officers. You could use a class-based gloss to capture that aspect of it, although I couldn't find other sources doing so.

No, "chevronman" doesn't make sense. It has no meaning that any English speaker would readily comprehend, at least not how you want it to be. Were it to have a capital letter, it might make sense as a superhero name, a superhero who wears a chevron on his chest and whose power is somehow tied to that symbol, a chevron being an inverted v-shape.

I can't speak for the militaries of other predominantly English-speaking countries, nor can I really for the US military as I haven't ever been in the US military, but as far as the US military is concerned, it's common knowledge among Americans, not just members of the military but laypeople as well, that the number of "chevrons," or lack thereof, on the sleeve of a soldier's uniform (at least as far as the Army, Marine Corps, and Air Force are concerned) denotes various levels of military rank, i.e., the more "chevrons," the higher the rank (see image below): 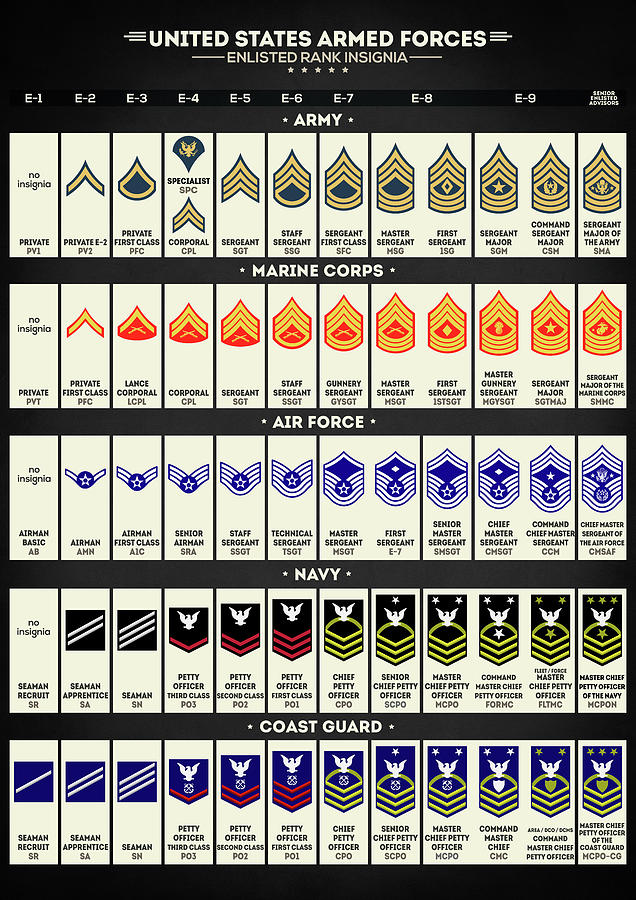 In the US military, one must have a high school diploma or equivalent in order to enlist, so being "enlisted" demonstrates that. The only members of the military that aren't enlisted are draftees (conscripts), something that hasn't existed since the end of the Vietnam War back in the early 1970s, and some convicted criminals who are alternatively sentenced to serve their time in the military rather than in prison, something only the US Army allows.

I don't know what, if any, insignia one wears on one's US military uniform that shows one is "enlisted." I Googled it but couldn't find an answer. I would assume there must be something, though, because it's also common knowledge that there are various privileges and accesses that enlisted soldiers get but that non-enlisted ones don't, so there it stands to reason that there must be something on the uniform that shows whether one is enlisted or not, something that can be readily seen by those regulating entry into certain areas, like clubs and lounges, and by Military Police (MPs). Whatever the name of that insignia is — maybe someone with military background would know — would be the equivalent to what you describe the "chevron" represented in the Hungarian Army, but the terminology used in English in the US military that would convey that, though only secondarily as a happenstance of requirements to enlist, is "enlisted" (i.e., "enlisted soldier" rather than "chevronman").

All of that is just added information, though.

I would say that it depends on context. If this is for a work of fiction, or if you're simply trying to be creative, then yes - with appropriate contextual cues it would make sense, though as noted in another answer it would likely seem to many English-speakers to refer to non-commissioned officers (NCOs / sergeants) or rank-and-file lower enlisted folks.

The US Army, for a short time during and immediately after WWII had Technicians, though soldiers holding a technician rank was typically addresses for the NCO rank associated with the chevrons and rockers, and despite having been a real thing many people even in the US Army today don't really know much about it.

As you clearly note, no other military that I'm aware of has a distinguishing title for high school graduates. If your usage is simply to give them some skill or education above what a typical soldier might have, Warrant Officers would be very vaguely similar, but that entails special training in the branch of service that they are assigned, so isn't actually the same.

The closest concept to the lace decoration for academic achievement would be the service stripe.

These typically reflect “time in” as opposed to rank, but nothing would prevent a branch of the armed services from recognizing time spent in coursework as being equivalent to time spent in other types of training.

There are various ways that someone actually serving in the military might refer to another soldier with a hypothetical “education stripe”. Most of these are not complimentary, and probably wouldn’t be used by an officer speaking more formally to enlisted soldiers.

So although “chevronman” wouldn’t work in English (as others have pointed out), you could imagine a term like “ed striper” that wouldn’t sound too out of place.

In English, we might use synecdoche — the rhetorical device of referring to a part to represent the whole. Something like:

Both of these also express a certain sense of bemusement (in its sense of wry or tolerant amusement) regarding the "benefits" of this decoration.

I don't know which part of the word karpaszományos refers to this decoration, but if you can pick it apart, you might be able to find some clues for alternatives to the word lace.