In this sentence, I'm describing the sides of an underground forge's chimney:

It was an underground cavern with a shoot leading up in the middle.

I would need to find a better substitute for shoot. I'm positive a word exists with the same or similar pronunciation, but I just can't seem to find it anywhere on the internet. I've been thinking about using chute, but that specifically describes a hole in the ground where you put things to transport them somewhere.

I'm looking for the word for the outside walls of the chimney, yes. But with the caveat that said chimney is underground and we cannot see the top of it.

I would accept having to rewrite the sentence if nobody has any suggestions. 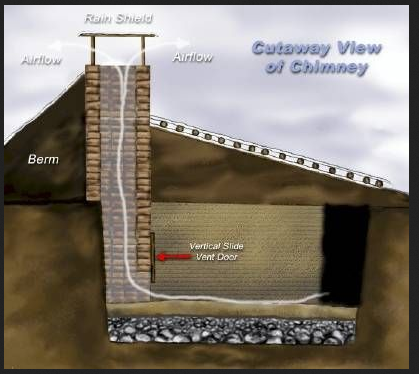 In a chimney, that's called a "flue." The word you're looking for is "flue":

flue - noun - a passage or duct for smoke in a chimney.

The flue is what smoke travels up to vent outside. What chimneysweeps sweep is a chimney's flue. When Santa comes down the chimney on Christmas Eve, he comes down the flue. 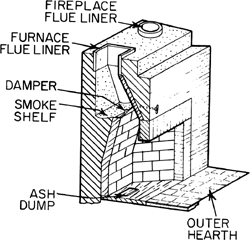 As illustrated in the image above, you will see that the inside walls of a chimney are called the "flue." Some chimneys even have a flue liner, which is smooth clay or ceramic and lines the flue, making it so that less soot accumulates on the surface than would if it were, say, not lined and the smoke were passing along rough brick and mortar, the accumulation of soot in the flue being a leading cause of fireplace-related housefires.

You commented that you thought the "flue" was a mechanism that can block off the flow of smoke. It is NOT. That is called a "damper," as shown in the illustration above. A damper (see def. 2) is a metal plate that can be closed or adjusted to varying degrees of openness, normally closed when the chimney is not in use but open when the chimney is in use, typically adjusting it just open enough that smoke isn't backing up but closed enough that the amount of heat coming from the hearth is maximized rather than going up the chimney.

An option with a slightly technical bent would be stack. In a forge, you need the induced draft from the chimney. The smoke stack is a passive machine that induces the draft. It's the stack part that communicates this. Flue stack, chimney stack, smoke stack, etc.

noun: smoke-stack
a chimney or funnel for discharging smoke from a locomotive, ship, factory, etc. and helping to induce a draft.

From Google courtesy of Oxford Languages

So if your forge lacked forced induction, it would be appropriate to include stack in there.