What is the name for the symbol of a person?

symbol
NOUN
1 a mark or character used as a conventional representation of an object, function, or process, e.g. the letter or letters standing for a chemical element or a character in musical notation.
•   a shape or sign used to represent something such as an organization, e.g. a red cross or a Star of David.
2 a thing that represents or stands for something else, especially a material object representing something abstract:
the limousine was another symbol of his wealth and authority.

According to this definition, what is the word for a personal symbol? Emblem? Badge? Insignia? I know the definitions of those words, but I wonder whether or not one's symbol falls into either. Is there a dedicated term for this?

By personal symbol, I mean a symbol meant to represent someone. Since I was a child, I have been designing personal symbols for myself; those someway represent me. That is what I am referring to.

In the '90s, when Prince (i.e., Prince Rogers Nelson) lost the legal rights to his name to his record label, which had copyrighted it, he craftily changed his name to a personal character of his own design: 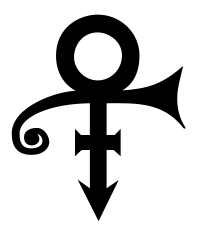 I say he did so "craftily" because by him self-designing it and thus it being entirely unique to him and by him himself† ascribing it no name or pronunciation, he roundaboutly kept his name without actually using it himself via an end run that led people in general to still call him "Prince" and led to the press, in order to avoid lawsuits without having to add a new character to all presses worldwide just for those occasions they wanted to refer to him, referring to him not with that symbol but as "the artist formerly known as Prince."

The above led to numerous petitions to have that personal character added to Unicode, which led to the following response by the Unicode Consortium, stating that it was not eligible for inclusion in Unicode, which:

"does not encode personal characters, nor does it encode logos."

While this legalese response appears to give the formal name for such a thing, that isn't what people in general have called it.

The word "symbol" is what people in general have called it. Even the above-mentioned article uses the word "symbol" to refer to it before providing the quote that came from the Unicode Consortium's ruling not to include the then artist formerly known as Prince's symbol in Unicode.

† "him himself" since others (i.e., fans) would later ascribe it a name, calling it the "love symbol" after the name of Prince's album Love Symbol, it being OK to call him Prince again since in 2000, he got his name back from his former label when the contract expired

avatar NOUN
2. An icon or figure representing a particular person in video games, internet forums, etc.
‘conversation is depicted in a balloon over the avatar's head’
LEXICO

For example, on this forum there is a little picture to the left of my user name at the bottom of my posts. I put in my own custom avatar, rather than using the default provided.