Is there a term for a child born after the death of its sibling?

A couple loses their only child and some time later they have another child. Is there a term for that second child? I once heard a parent use a phrase to describe it, but can't remember anymore.

expressions phrase-requests
Share
Improve this question
asked May 9, 2021 at 21:56

I believe ‘rainbow baby’ is what you're looking for.

A rainbow baby is a term for a child born to a family that has previously lost a child due to miscarriage, stillbirth or death during infancy

Also according to Lexico:

A baby born subsequent to a miscarriage, stillbirth, or the death of an infant from natural causes.

As @Pam pointed out in a comment below, Google Ngram shows a spike in the usage of rainbow baby in recent years: 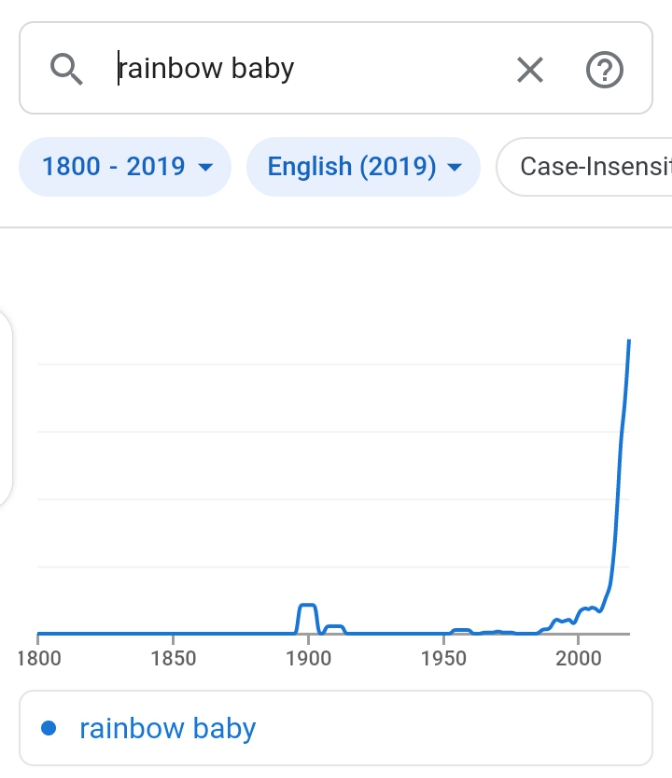 I have family experience of this and it was described as "second and only child."

It's often a difficult topic for the parents to discuss and the above statement is easy to understand.

Replacement child to refer to a child conceived shortly after the parents have lost another child.

In 1980, clinicians Robert Krell and Leslie Rabkin identified three types of replacement child: the "haunted" child, who lives in a family overwhelmed by guilt and silence, the "bound" child, who is incomparably precious and sometimes over-protected, and the "resurrected" child, who is treated as a reincarnation of the dead sibling.

Google Books shows that usage the expression “replacement child” has increased consistently from the ‘60s especially in medical, academic and specialized papers.

But the expression can be found also in more popular online papers such as:

I'm a replacement child - When Maria Lawson's older sister burned to death aged four, her mother was told by the family doctor to have another child. Which is how Maria came to be born, and – unbelievably – christened with the same name as her dead sibling

The Gift of Being A 'Replacement' Child - I grew up believing that I was a replacement child, for I was given life after another child lost his: a brother my family loved and missed, and whose absence cast an obvious shadow over my grieving mother's heart.

“This term originated in the field of psychology. Outside of the field, it should be used with care, as the death of a child is an especially sensitive subject, and the expression can be interpreted as an extremely callous thing to say.”

@Lambie you are incorrect that it's what others say, because I myself am the proud mother of a sunshine baby, an angel baby as well as a rainbow baby and I say it about all 3 of my children. For the ones that don't know the meaning of these:

Not the answer you're looking for? Browse other questions tagged expressions phrase-requests or ask your own question.

6
Is there a concise term for being over-aware of bad news happening?
1
One word to describe a situation where two people have their first and last meeting in the same place
6
Leaving someone with lots of questions in mind
33
Is there a term for a masked / veiled question to find sensitive information?
0
Expression for someone who has fallen in love a lot
1
Is there a term for someone who takes a long time explaining simple things?
1
Term for thinking you can't do something?