Did “A F” exist as an intensifier prior to social media?

"A F" is short for "as fuck". It popped into my lexicon a few years ago, when I started hearing it in Youtube videos. (See this video as an example, although this wasn't where I first heard it.)

The earliest entry in Urban Dictionary I can find is from 2011.

Looking at USA Google Trends for "A F", "A. F." and "as fuck" show "A F" has been used for something (possibly Air France?) since at least 2004, which is pre-Twitter, but post MySpace. It also shows an uptick in "as fuck" from around November 2009, which might coincide with the introduction of "a f" as an intensifier. The "a. f." line is pretty low. 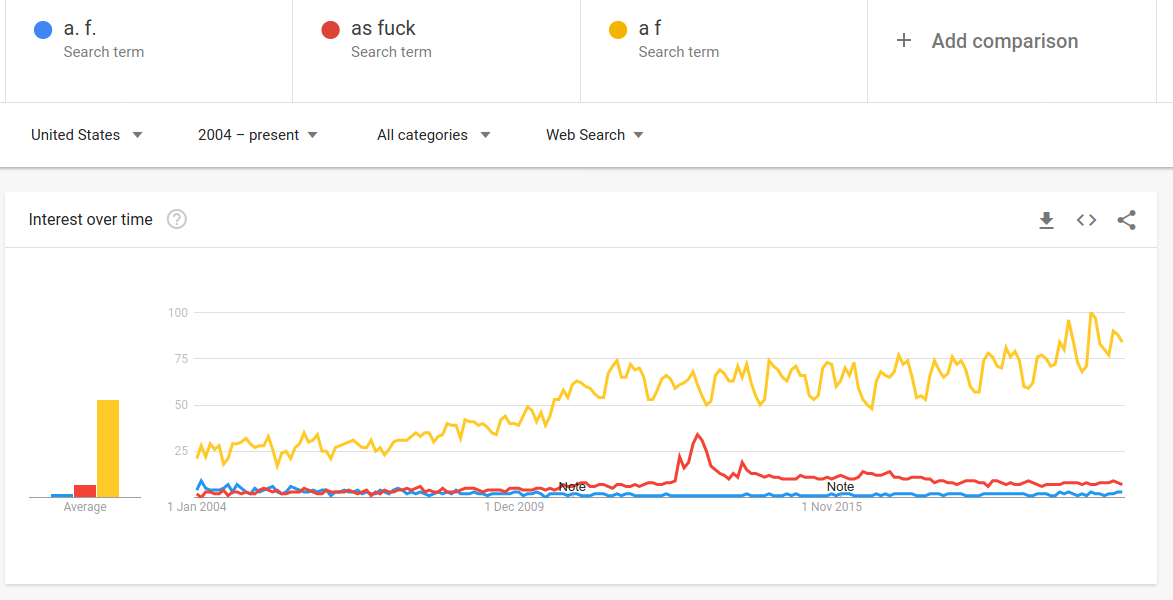 This seems impossible to search for in Google Books, because A F are initials. Using the ngram viewer with "A F_ADVERB" gets no hits.

It doesn't appear in the OED online, and Greens Dictionary of Slang lumps it in with "as fuck". I'm at a loss for where to look.

Is there any evidence out there that "A F" was coined before the advent of social media? Perhaps in military slang?

According to Green’s Dictionary of Slang as fuck (intensifier) earliest usage examples are from the 70s’:

(also a.f.) a general intensifier, the coarse synon. for ‘as anything’.

According to the following extract from Dictionary.com the abbreviation AF was used at least from 2009, often in the combined expression “savage AF”:

... AF, often lowercased as af and standing for as fuck. As fuck is an intensifying phrase used since the late 1970s. It’s been abbreviated, and mildly censored, as AF in text messages and on social media since the late 2000s.

Together, “savage AF” have been doubling down on the intensity since at least 2009, when savage AF debuts on Twitter. Early uses of savage AF describe something as extremely good, a use that continued into the 2010s.

Not the answer you're looking for? Browse other questions tagged etymology history intensifying-adverbs social-media or ask your own question.