When working in a 2D coordinate system you could say that X is the horizontal axis and Y is the vertical axis.

Extending this to 3D, is there a similar word for the Z axis?

(I'm aware of Width, Height and Depth, but obviously horizontal and vertical aren't synonymous to width and height, which is why I don't want to call the Z axis the depth axis.)

I doubt there is such a co-hyponym (if we can call it that) to horizontal and vertical. You'll need to use an alternative name.

If you imagine the 3 axes, then the Z would appear "on the same level" as the X one. Depending on which ones you consider, 2 of the 3 will appear as such and actually, they are. 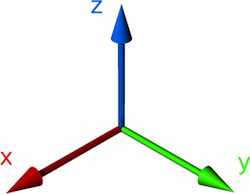 If you look at the Wikipedia page for Cartesian Coordinate System, under the section Cartesian Space it says:

For 3D diagrams, the names "abscissa" and "ordinate" are rarely used for x and y, respectively. When they are, the z-coordinate is sometimes called the applicate.

Emphasis mine. It says they are rarely used, but I doubt there are many other alternative terms, other than Z-axis, depth, and so on; they're the most appropriate terms, if you're looking for something technical.

In aviation we use the terms longitudinal, lateral and normal (or vertical) for the three axes. See this description.

Note that these are fixed relative to the aircraft, not the earth.

Perhaps it's time to coin a new term? Here are a few possibilities I came up with:

Upon further research, it appears that in the realm of print media, they refer to the 3rd axis of linearity as "stacked". So you have horizontal, vertical, and stacked printing layouts. Here is a link to the best explanation I could find:

In hind sight, when making user interface layouts where the items move along the Z-axis (in a list), I have referred to them as being stacked. Given that this is in the context of programming, stacked may work for you if you're referencing the linearity of a layout.

I would use a diagram or key to specify what you mean in your particular case.

The axis, that is perpendicular to the plane of the graph, is usually called the normal axis.

As for variable names, you will have to drop the h-v concept and adopt the xyz nomenclature. Just remember in 3-D, the z-axis is the equivalent of the conventional 'vertical' (the entire 2-D x - y plane being the 'horizontal').

In my 3D coding experiences, we have called it the z-axis and depth. As well as z-values and depth-values used to mean the same thing. And also we rarely used horizontal and vertical, we just called those x-axis and y-axis.

Both of these answers are somewhat rejected by your question, but this is the answer I give based on my experiences. Maybe if you described the context of your usage, it would help.

Assuming cartesian, affine, orthogonal coordinate systems wherein axes are perpendicular towards each other and usually parallel to the viewport edges, the planar 2D coordinate system (for specifying positions, linear paths and areal shapes) of

of a spatial 3D coordinate system (for also specifying volumetric bodies). The positive directions conventionally follow the right hand rule with the thumb pointing towards X+, the index finger towards Y+ and the middle finger towards Z+.

In the 1st case, especially used with maps, the Z-axis becomes the vertical dimension, which is often positive only, and either the X-axis or the XY-plane is considered horizontal. In the former case, the Y-axis has no conventional designation matching the horizontal ∶ vertical pair, and it is only ever used when both of these axis are oriented the same as the drawing canvas, which explains somewhat why there is no third term. In the latter case, no designation is necessary.

Only in the 2nd case, there are formal alternative names available: the third axis is called an applicate in environments where the others are known as abscissa and ordinate. This means, an applicate always follows the virtual line of sight of a spectator ranging – according to the right hand rule – either from negative back to positive front, e.g. in most paper diagrams with the origin in the lower left, Y+ pointing up and X+ pointing right, or from negative (or zero) proximity to positive distance, e.g. on screens and all other planar media inherently organized in horizontal lines or rows and vertical columns running from top to bottom. One could derive neologisms from these terms, e.g. *abscissal ∶ ordinal ∶ *applical or *applicational.

Layout systems often use the 2nd convention, but only support a 2.5D space with multiple planes in distinct, indexed and possibly named layers that are stacked above one another in a canonical order with a thickness of zero. The equivalent to horizontal-vertical position for the pseudo-dimensional axis would be level with the derived neologism *levial. 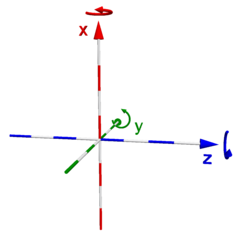 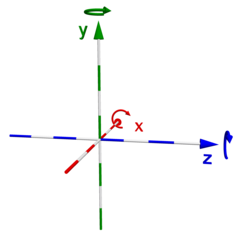 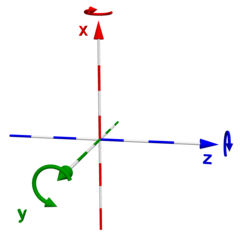 It often makes sense to establish a relative, local coordinate system for any (moving) object in 3D space. Its trajectory (from–towards) or (if stale) bearing of its assumed line of sight, e.g. along a nose, determines the longitudinal axis. Its lateral axis is perpendicular to this, e.g. alongside wings, and together they span a plane that is often (approximately) parallel to the ground and which the third, normal axis is perpendicular to. This triple longitudinal ∶ lateral ∶ normal basically matches <wanted term> ∶ horizontal ∶ vertical, thus longitudinal could be argued for as a reasonable candidate for the third axis in absolute, global coordinate systems as well.

Looking at a related language, there are native terms for horizontal and vertical in German: waagerecht and senkrecht, respectively. They either originate in or at least align with the desired states of beam balance scales (Balkenwaage) and plummets (Senkblei, Senklot). Accordingly, Ænglish cognates would perhaps be *scaleright and *plumbright. There is no term for the third axis or orientation in German either, but analogous construction could yield something like *eyeright, *sightright, *shotright, *wayright or *pathright.

Fortunately, most people do not have to deal with cylindrical, polar, equatorial, horizontal or other spherical and yet more exotic coordinate systems on a regular basis. Those require terms like pole, horizon and equator, longitude and latitude, ascension and declension, azimuth, celestial, ecliptic and galactic, zenith and nadir.

There is no standard term for this, but distal seems to fit both aesthetically and etymologically with the other two (horizontal from horizon, and vertical ultimately from vertex "highest point"), assuming the following perspective: 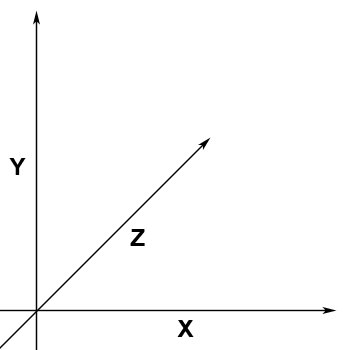 with distal referring to "distant" points.

I had this same question working on a 3D interface today, and came to the conclusion that "vertical" (y axis), "lateral" (x axis), and "horizontal" (z axis) fit reasonably well.

By deductive reasoning (taking away the left-to-right perspective covered by lateral), we can conclude that "horizontal" is an appropriate term for nearest to furthest away (toward the horizon, as it were.)

Not the answer you're looking for? Browse other questions tagged single-word-requests adjectives terminology mathematics or ask your own question.

0
Horizontal, Vertical and?
4
Terms for generic forms of 3D motion on the 3 axes
2
What is the technical term for up & down, back & forth, and left & right?
0
What is a word to accompany horizontal and vertical?
1
A word meaning “in the direction toward or away from one's self”

1
Term for pertaining to the polar direction
4
Words for north/south and east/west dimensions?
3
Can “paraxial” mean “axis-parallel”?
2
Word for “having horizontal and vertical directions” that a mathematician doesn't use
2
What is the technical term for up & down, back & forth, and left & right?
0
What is a word to accompany horizontal and vertical?
2
Word for “orientation” when talking about things that have two sides?
3
Are there words to describe depth of a solid object?