Did the word "dreamboat" ever have negative connotations?

I stumbled upon this answer on Science Fiction & Fantasy, which includes the following panel from a Donald Duck story originally published (always according to the answer) in 1949. In the panel, Donald seems to have bumped into a large zombie and exclaims "Why don't you look where you're goin', you big dreamboat?": 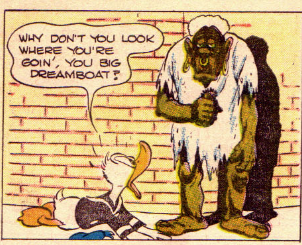 Now, from context, the word dreamboat seems to be used to convey something like "you big lug". Perhaps someone lost in their dreams and not paying attention? I have never seen the word used this way, and there is no mention of such a meaning in Etymonline.com which simply gives:

This is the meaning of dreamboat with which I am familiar and also the meaning mentioned in the online dictionaries I have access to. For example, the online Merriam-Webster defines it as:

slang
: one that is highly desirable
especially : a very attractive person

Dictionary.com also has an extra meaning but that one doesn't seem any more relevant:

The Free Dictionary, the Cambridge English Dictionary, Collins Dictionary and Wiktionary all give variations on the same theme, with some including the meaning of "luxurious car" but none suggesting any kind of bad connotation for the word.

Of course, Donald is not a character renowned for either his erudition or intelligence, so it is entirely possible that this is nothing but a joke and is an intentional misuse of the word by the authors, but I'm wondering if there used to be any other connotations of the word back in the late 40ies.

So, was there any established negative meaning of dreamboat at the time or is this just Donald being Donald?

The word dreamboat used in the sense of "a boat that a sleeper travels on to reach the land of dreams" appears at least as early as the late nineteenth century. From George Cooper, "The Isle of Nid-Nod," published in Our Little Ones, reprinted in the Roanoke [Virginia] Times (May 30, 1893):

When the scarlet glow of the dawn shall wake / Homeward again our sail w'll take; / And we'll say good-by to the wee folk all, / Promising every night to call! / Soon my precious will coo with glee / Safely moored will our dreamboat be; / Come, my little one, sail with me / To the far-away Isle of Nid-Nod!

Sleep, my little one. None may know / Whither the Dreamboat saileth, / But One heedeth ever wherever you go, / And His is a love never faileth.

A song titled "Dreamboat" seems to have been quite popular in Australia in 1917 and 1918—with one account referring to its being sung by a lead singer accompanied by a chorus of "her dreamers"—and in 1919 Edgar A. Guest wrote a poem titled "Lullaby about a night's travels on a golden dreamboat with silken sails, reprinted in the Abilene [Texas] Daily Reporter (April 4, 1919). Subsequent "dreamboats" voyaging to the land of dreams—including a CBS radio program of that name—appear during the 1920s and 1930s.

The use of dreamboat as a metaphor for childhood appears explicitly in Annie Chartres, The Devourers (1910):

Some characters evolve slowly, by imperceptible gradations, as a rose opens or a bird puts on its feathers. But Nancy broke through her chrysalis-shell in an hour. From one day to the next the gentle, submissive Nancy was no more; the passive childlike soul clothed in the simplicity of genius died that night—for no other reason but that her hour had come — drifted off, perhaps, in the little dreamboat of her childhood, where Baby Bunting sat at the helm waiting for her. And together they went back, afloat on the darkness, to the Isle of What Is No More.

The first instance I could find of "dreamboat" serving as the name or designation of a person appears in a letter to "Uncle Jeff" in "Children's Corner," in the Albury [New South Wales] Banner and Wodonga Express (December 20, 1929), from a girl who closes her note as follows:

Wishing you a Merry Christmas and a Happy New Year.—Your loving niece, "Dreamboat."

The sense of "Dreamboat" in this instance evidently has to do with "innocent dreamer" rather than "romantic ideal." Similarly, "Dreamboat" appears as a letter writer's moniker in "The Beehive," another column for young people, in the [Sydney, New South Wales] Land (May 20, 1932).

The earliest match for dreamboat in a romantic sense that an Elephind newspaper database search turns up is from Catherine Avery, "Hep to the Step," in the [Richmond, Virginia] Jeffersonian (May 8, 1942):

So you want to impress that dreamboat who comes to the library the same period that you do. Perhaps talking would turn the trick. Talk loud. Get sent back to your study. That should impress her (or him) even more.

And now to the magazines—don't drool so, kiddies. Yes, we know that "Life" has the most wonderful pictures, "Boy's Life" rough'n ready adventure stories, and "Vogue," fascinatin' fashions; but that's no reason to consider the attraction yours. Don't be a "bad little tid" and rip them out. Leave them for posterity—or at least for dreamboat to see, too.

The author of this piece is identified as "Student Library Assistant" and the Jeffersonian was the student newspaper of Thomas Jefferson High School in Richmond. It seems highly likely that dreamboat was a popular slang term for "person one has a romantic crush on" at Jefferson High School at the time of this article.

In 1944, "Dreamboat" could be found as a characterization in news items about Hollywood actor Guy Madison, Hollywood actor Walter Pidgeon, and University of the Pacific School of Dentistry student Ed Erigero.

Negative or sarcastic use of 'dreamboat'

During World War II, dreamboat was frequently applied to fancy (or fanciful) cars, boats, and airplanes, culminating in the informal name "Pacusan Dreamboat" being given to the U.S. Army Air Force's B-29B Superfortress bomber built in 1944. It is possible that Donald Duck's decision to address the lummox pictured in the 1949 cartoon as "you dreamboat" was an attempt to equate him with the huge lumbering B-29. It seems far more likely, however, that the choice was simply sarcastic.

A different (but equally) sarcastic use of dreamboat appears in "Puppeteer Is Ex-Times Carrier," in the Indianapolis [Indiana] Times (July 30, 1952):

All of his [Earl Snellenberger's] marionettes are born of a keen imagination for using household scraps and a natural talent for art. Take for instance characters for "The Frog Prince," which he presented this week at the Ft. Knox school.

The queen is a dreamboat with burlap hair. Earl unravelled a burlap sack, meticulously combed the strands and dyed them blonde. The lady's cape is dyed gauze and her gown one of sister Katy's cast-off winter skirts.

Most people would not consider burlap hair to be a feature of choice in a romantic ideal.

In general, though, dreamboat is probably used sarcastically or pejoratively no more often than, say, "prince charming" or "belle of the ball" is—and probably a lot less often than sweetheart is.