What does "corning a place" mean?

I'm translating some chapters of the book A History of Greek Fire and Gunpowder by J. R. Partington with the Introduction by Bert S. Hall.

"Any history of early gunpowder should afford corning a major place, but such matters as wood species and grain size and shape are things that lie outside the realm of the chemist, and indeed, of the scientist."

Now, when I look up the word "corn" as a verb, I can only find it in the Merriam-Webster Dictionary which reads:

1: to form into grains : GRANULATE

2a: to preserve or season with salt in grains

b: to cure or preserve in brine containing preservatives and often seasonings corned beef

3: to feed with corn

All in all, I'm really confused by the wod "corn" here. I thought it might be a typo and actually was "corner", but I think it is highly unlikely.

The sentence is from the introduction to the book which was written by Bert S. Hall who I assume is an American native speaker. So I don't think it was just a misusage of a random word.

What also made me think it wasn't just a random misuse is that just 6 lines above in the same passage, Bert S. Hall uses the word "corn" in the sense of "granulate", and this might indicate a deliberate choice of the word "corn" in my sentence. However, it still doesn't make any sense to me.

So, anyone to help me figure this out? Any insight would be appreciated.

Google Books link to the e-book:

The process of gunpowder manufacture requires the mixing of saltpetre (potassium nitrate, a strong oxidising agent), carbon (charcoal, a coarse substance) and sulphur (a solid). The explosion happens when the mixture is deflagrated to oxidise the carbon and sulphur, suddenly releasing a great deal of energy. This can only happen if the constituents are in intimate contact rather than in coarse block-like contact. For example, three bricks of the constituents laid side by side are unlikely to explode, but if the same quantities of fine grains are mixed (ever so gently!) they are extremely dangerous and vulnerable to the slightest spark. To make gunpowder, the constituents therefore must be mixed and milled to a fine grain size.

Sulphur and charcoal were separately ground small but then had to be mixed with water and saltpetre crystals to make a sludge that could be dried to form a cake. The cake then had to be ground in a corning mill to a fine grain. This process is fraught with risk, which is why gunpowder mills were situated well away from population.

afford = to make available, give forth, or provide naturally or inevitably

"The sun affords warmth to the earth." "a delay that will afford us more time"

Corning should therefore be given (afforded) an important place in any account of gunpowder manufacture.

The word corn occurs with similar meaning in corned beef, as you relevantly quote.

I add that the mills were also known as kerning mills. Kerning relates to the spacing between things (as with the granulation of gunpowder) and the word occurs elsewhere, for example:

Kerning typography is the spacing between individual letters or characters.

Here is a relevant illustration: 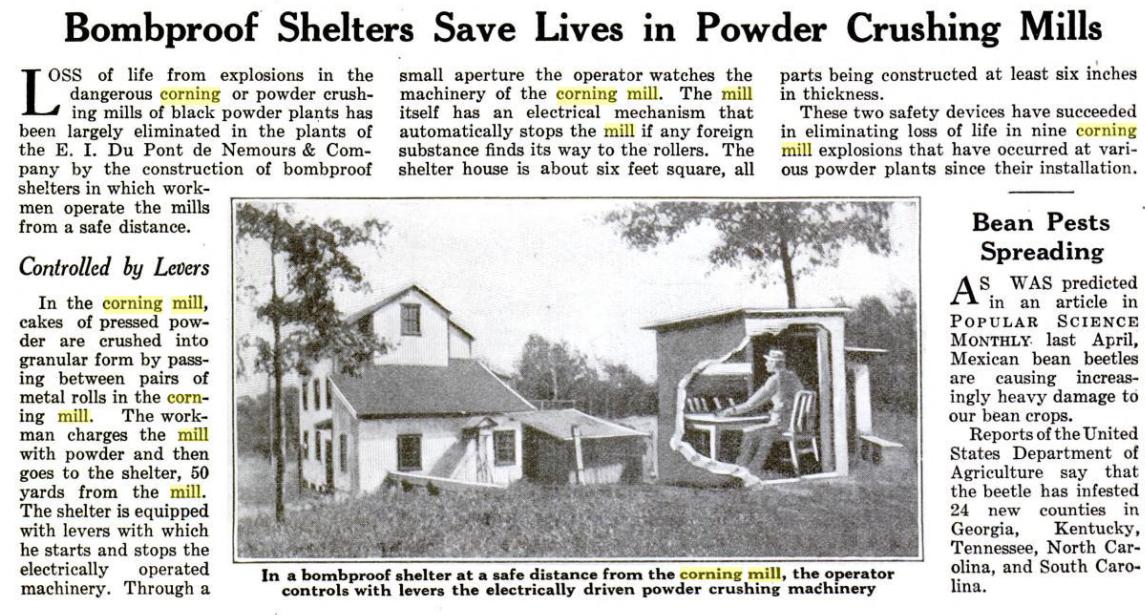 Not the answer you're looking for? Browse other questions tagged meaning vocabulary or ask your own question.