English equivalent of Vietnamese "Rather kill mistakenly than to miss an enemy."

There was a Vietnamese political leader who said during the war, "Thà giết nhầm còn hơn bỏ sót," which translates to "Rather kill mistakenly than to miss an enemy."

I'm wondering if there is a similar saying to capture the spirit. Sayings like "leave no stones unturned" or "spare no expense" seem a bit casual to me.

Edit: Someone also commented about the phrase "Kill them all; God will sort his own". I think that's also very fitting.

Another English expression that may be on point here is shoot first; ask questions later. Martin Manser, The Facts on File Dictionary of Proverbs (2002) explains the sense of this proverb (which it gives in a slightly different form) as follows:

shoot first and ask questions afterward In certain circumstances—for example, when facing a potentially dangerous person or thing—it is safer not to lose time weighing up the situation before taking action; often used in contexts criticizing such hasty or arbitrary behavior: "It struck her, too, that war seemed to have made the people on that side of the ocean extremely ready with weapon. They would be quite likely to shoot first and ask questions afterward—which would be too late to be helpful" (Mary Roberts Rinehart, The Amazing Interlude, 1918).

Perhaps "Kill them all and let God sort them out." which actually has a much earlier source than I would have suspected, going back to an incident in modern France in 1209.

There is an expression in English called Blackstone's ratio that expresses the opposite sentiment (it's very well-known, even if people don't always know its name):

It is better that ten guilty persons escape than that one innocent suffer.

Sometimes this aphorism is deliberately inverted to have a meaning very much like the quote you've translated:

It is better that ten innocent men suffer than one guilty man escape.

Because Blackstone's ratio is so famous in English-speaking countries (and is supposed to be a foundational principle of the justice system in many of these countries), this inversion is usually not sincerely stated. It's more often attributed to others as a way of pointing out unjust or authoritarian systems. You could even replace "suffer" with "be killed" to more closely approximate the original Vietnamese quote and most English-speakers would recognize the reference.

If the OP wants an expression that is specifically, literally, about killing, then the answers already given are on point, particularly those that trace back to the Albigensian Crusade.

If, however, it is sufficient to convey a figurative sense of "doing something bad in order to be safe", or "expeditious / pragmatic evil", then here are two that haven't been suggested yet:

Better safe than sorry / It's better to be safe than sorry Typically this is used to mean it is better to be cautious, not hasty, so that one does not make a mistake. However it can be used in the sense of being unjustly incautious, violating the rights or safety of others in order to protect oneself. Such a usage would be easily understood in media like films and video games.

It's easier to ask forgiveness than to get permission It is better to expediently get done what you want, even if others will consider it wrong; you can offer an insincere apology later, after you have benefitted from your actions.

Possibly it originates with a Crusader commander (1209)

...but for me the English version goes back to the US-Vietnam conflict that supposedly began during the JFK administration in 1961.

The first time I heard the English version was from USN and USMC personnel returning from Vietnam in the 70s and doing re-training with us at GLakes and Bainbridge. Many were pretenders, but others had "walked the walk". Some of them even had shoulder flashes such as this from old uniforms. 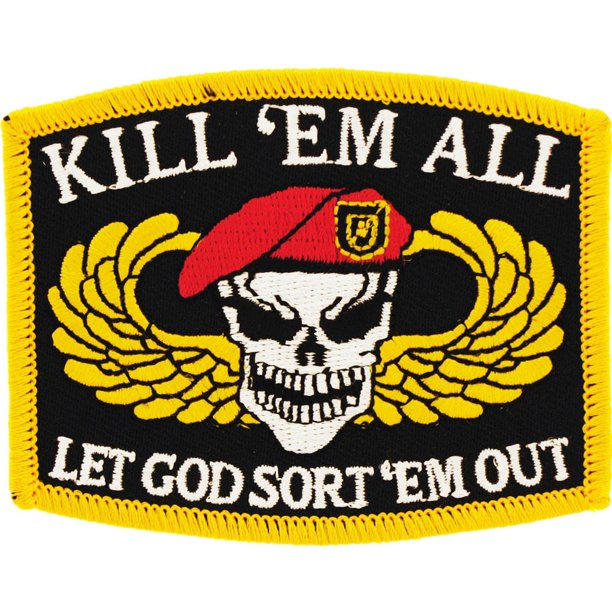 It was an unofficial slogan of MACV SOG. As far as I know the winged-skull was used by most most branches, but the flashes with the anchor were SEALs.

Later, I did some interviews (1990s) in Guatemala with some veterans (graduates of the Phoenix program), and as you can see the attitude prevailed ..

Paraphrasing from one and to the best of my memory...

" We had intel that said there were some URNG guys habiting there. We got there before dawn, and set up SAWs at the east and west of the ville, but the fucking dogs started barking... My guys went in from the garita... with a lot of noise and commotion. ...villagers went running up the hillside into the enfilade ...assholes never had a chance. I think we had a body-count of around 300, fuckin piece of art...guerilla?...who the fuck knows? ...let God sort it out..."

AFAIK, that particular engagement is still "under investigation". It is a matter of record that approximately 250,000 civilians lost their lives during the Civil War and genocide that lasted for almost 30 years in my country.

And I found this on ThisDayinQuotes,com...

I think the attitude has existed since the dawn of military history.

There used to be a concept of "collateral damage"...

"It is better that ten innocent men suffer than one guilty man escape."

This is apparently attributed to Otto Von Bismarck, in contrast to William Blackstone who formulated the more familiar saying to the contrary.

And certainly, nobody would consider the statement of such a hardline position to be "casual".

@cascabel already alluded to this in an answer, but I think worth have it explicitly as an answer. Something like ...

That Vietnamese political leader did not [mind|care] about collateral damage he inflicted.

collateral damage
during a war, the unintentional deaths and injuries of people who are not soldiers, and damage that is caused to their homes, hospitals, schools, etc.
-- dictionary.cambridge.org

I don't know enough about Vietnamese politics to judge how seriously this was meant, but a (less than serious) quote from the trial scene in Lewis Carroll's "Alice in Wonderland" might be relevant: "Sentence first - verdict afterwards".

Or you might want to riff on the well known saying "Measure twice, cut once:" "Shoot twice, aim once."

The political leader prefers to kill when unsure whether someone is an ally or an enemy. That is essentially a presumption of guilt. This is the most common way to express it:

[Everyone is] guilty until proven innocent.

Here's a list of terms and idioms that fall all around the military concept of friendly fire and commitment to firing upon all threats - or being fired upon as a threat.

There are more, but this list makes it brief. If your intention was to describe a less hostile situation military phrases might be out of place. For example, you might be merely describing an intention to catch the guilty party in the act: 'catch them all unawares'.

Being in a hostile place where you shouldn't be is best described as being in 'no man's land'. It's the combat zone between two warring sides.

'Shoot first, and ask questions later' is probably the most commonly used phrase that is equivalent to the Vietnamese phrase.

user893154user893154
1
Add a comment  |
Highly active question. Earn 10 reputation (not counting the association bonus) in order to answer this question. The reputation requirement helps protect this question from spam and non-answer activity.