Is "spilled milk" a 1600's era euphemism regarding rejected intercourse?

Motivation:
My daughters love and admire the character of Molly Bannaky and her descendant Benjamin Bannaker:
https://www.womenhistoryblog.com/2008/07/molly-welsh-banneker.html

The impact of Benjamin Bannaker on the ideology of Thomas Jefferson is arguably profound and its impact on the world through Jefferson are spectacular. I think Molly and her grandson Benjamin are amazing people.

Fact:
In her background she was convicted in a court for spilling milk, allegedly that of an obstinate cow, and for it she was sentenced to 7 years of indentured servitude. She was not hanged for theft because she was literate and thus was able to defend herself in court. https://katedolan.com/molly-bannaky-the-amazing-woman-who-may-have-existed/

My problem with it:
Given basic human sustenance, that sounds like a very comparatively severe punishment for a relatively smaller crime.

Speculation on my part:
She was a young reproduction-age female servant, so it seems more anthropologically sound to imagine the sons of the owner wanted to have their way with her as opposed to shipping her to the other side of the world. It seems more plausible that either she was used as an example to cause other potential victims to comply, or that she was the preferred target and rejected with some brutality the advances of a highly-ranked suitor. The "Spilled milk" being reason for indure in a court suggests someone was willing to say it happened in a recordable way, perhaps the suitor or their parents. If the brutality were enough to anger them that would be reasonable. Several writings call the cow "obstinate" but given her life-story Molly is also obstinate (in several very commendable ways), and so the cow who kicked to cause the milk to spill could have been Molly herself. She could have kicked (and critically, in reproductive terms, wounded) someone trying to treat her like a cow.

Evidence: I don't know much about 1600's literature, except that the King James bible came out in the early 1600's and likely used the language of the time.

In Genesis 38:9 it uses the verb spilling to refer to something criminal and worthy of death that was done to the male component of reproduction.

The culture did not change in the 1800's era as rapidly then as it does now, and the following seems to imply something similar. 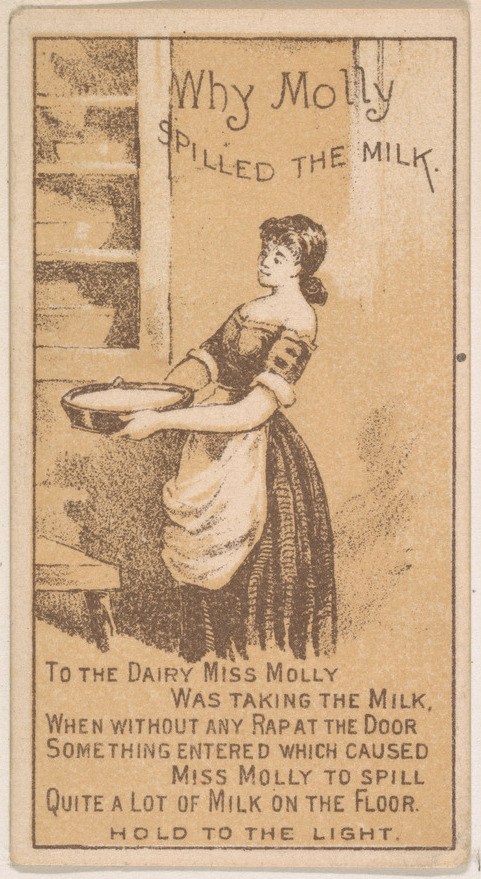 There are a number of literature elements that discretely communicated horrible events, such as "The Yellow Wallpaper" from 1892 being a euphemised description of an assault from the victims perspective. The toadstools get violent meaning when considered to be reproductive organs. Impo the wallpaper is not insane at all, it is just sending a coded message describing a hideous set of experiences. It was not unknown to encrypt a hidden message using metaphor or symbolism.

Question:
I can't imagine the cost in prosecuting and lost value in losing a servant being worthwhile for literal spilled milk, although it was done by land-owners in 1690's England and thus is not my cultural values or economy, so is there any evidence that "Spilled Milk" is used as a euphemism for something relating to sexual assault or violent rejection of a "suitor"?

Places that I have looked:
This site (link) says the term came into documented usage in the mid 1600's the term was "shed". In that vernacular the shed is also applied to blood as a term for murder.

This link says it means " lament a disaster or a loss that can not be undone" but as an idiom, the actual disaster is not the literal spilling of literal milk.

The association of the phrase "spilled milk" with Benjamin Bannaker's grandmother occurred much later than the 1600s.

His father was a native African, and his mother the child of natives of Africa; so that to no admixture of the blood of the white man was he indebted for his peculiar and extraordinary abilities. His father was a slave when he married; but his wife, who was a free woman and possessed of great energy and industry, very soon afterwards purchased his freedom.

The second account is (Sketch of the Life of Benjamin Banneker 1854):

In preparing an account of an humble individual, it is rarely- deemed necessary to furnish a long line of ancestry. The first member of the family of the subject of our notice, of whom we shall speak, is his maternal grand-mother, Molly Welsh, [footnote 1] a native of England, who came to Maryland, (at that time an English Colony,) with a ship load of other emigrants, and, to defray the expenses of her voyage, was sold to a master with whom she served an apprenticeship of seven years.

After her term of service had expired, she bought a small farm, (land having then merely a nominal value,) and purchased as laborers, two negro slaves, from a slave ship, which lay in the Chesapeake Bay. They both proved to be valuable servants. One of them, said to have been the son of a king in Africa, a man of industry, integrity, fine disposition and dignified manners, she liberated from slavery and afterwards married. His name was Bannaker, which she adopted as her sir-name, and was afterwards called, Molly Banneker.

According to the testimony of one of her grand-children, she was not only a white woman, but had a remarkably fair complexion.

So in the second account, she is no longer black but white, yet still no mention of milk.

Then in a third account (Banneker, The Afric-American Astronomer 1884) :

This Molly Welsh, who was a person of exceedingly fair complexion and moderate mental powers, had been an involuntary emigrant to America. When a servant on a cattle-farm in her native land, where milking formed a part of her duty, she was accused of stealing a bucket of milk, which a cow had kicked over. For this supposed offence, she was, by the stern laws of her country, sentenced to transportation, escaping a heavier penalty from the fact that she could read.

So finally in 1884 stealing milk is mentioned, but not the word "spilled", and stern laws for such an offense are specifically mentioned.

But to the general question of the consequence for stealing milk in England, the 1838 A Practical Guide to the Quarter Sessions, and Other Sessions of the Peace, Adapted to the Use of Young Magistrates, and Professional Gentleman at the Commencement of Their Practice, 4th edition at page 208 has boiler-plate language for indicting a person for stealing milk, and specifies the sentence:

...to be transported beyond the seas for a term of 7 years...

A bit of searching unearths this masters thesis
https://scholarworks.umass.edu/cgi/viewcontent.cgi?article=1215&context=theses

Which says about the incident:

This account intimates that Molly became a dairy maid, work at which she labored until approximately the year 1683 when she was accused of pilfering a bucket of milk and was subsequently brought before the court.37 Seventeenth-century English laws were harsh even for first-time offenders and the punishment for stealing was often death, even for items of little value.38

With the incredibly long citation:

38 References to seventeenth-century English and Maryland laws appear in J. S. Cockburn, Crime in England 1550-1800 (Princeton, New Jersey: Princeton University Press, 1977) and in Mary Beth Norton’s “Crime, Gender and Community in Seventeenth-Century Maryland,” in The Transformation of Early American History: Society, Authority, and Ideology. ed., James A. Henretta, Michael Kammen, Stanley N. Katz (New York: Alfred A. Knopf, 1991). Early Maryland laws may be found transcribed and in their original format on the web site: http://www.msa.md.gov/megafile/msa/speccol/sc2900/sc2908/html/codes.html including General Assembly Law Records from 1640 to 1692, and the Body of Laws throughout the eighteenth century. Information about the transportation of convicts is detailed in the works of Abbot Emerson Smith’s “The Transportation of Convicts to the American Colonies in the Seventeenth Century,” The American Historical Review, vol. XXXIX, 1934, pp 232-249 and Basil Sollers’s “Transported Convict Laborers in Maryland During the Colonial Period,” Maryland Historical Magazine, vol. II, no. 1, March 1907, pp 17-47. Russell Menard’s Migrants, Servants and Slaves: Unfree Labor in Colonial British America(Aldershot, U.K.: Ashgate/Variorum), 2001 and Kenneth Morgan’s “The Organization of the Convict Trade to Maryland: Stevenson, Randolph and Cheston, 1768-1775,” The William and Mary Quarterly, 3rd Ser., Vol. 42, No. 2 (Apr., 1985), pp. 201-227.

So I think it's safe to conclude that Molly's crime was considered theft and that the penalties were indeed that harsh.

Since you use Genesis 38:9 as the foundation for your hypothesis, please know that Onan's death was the result of spilling seed (having sex but spilling his seed outside of her vagina) in order to prevent his wife (his brother's widow) from becoming pregnant. He did this out of greed, to derail his Levitical duty to give her offspring, and thus deprive her child of his land inheritance should it be a son. Though the penalty for refusing to marry the brother's wife was not death, God saw this deception and, for His own reasons, struck him dead. So spilling "milk" is not "rejecting intercourse" or kicking a male where it might most hurt.

Though there are metaphorical uses of spilled milk, there is no evidence for "spilled milk" being used as a euphemism for something relating to sexual assault or fighting off a potential rapist. Proving a negative, however, is a lot of work. Better to start off with something known and extrapolating correctly to arrive at a hypothesis, then ask for supporting evidence.

Edited to add: the severity of historic punishments for crimes is surprising to us today, but wondering why a man should be hung for stealing a loaf of bread to feed his family doesn't necessarily force us to suppose something more serious happened, such as a sexual offense or that the thief deprived the bread's owner of his life (e.g. based on bread of life. History illuminates cruelty enough to take it at face value..

Not the answer you're looking for? Browse other questions tagged etymology history euphemisms or ask your own question.

6
Changing person and tense in a quote
2
When a person in public life inadvertently coins an expression, what is it called?
12
Where does the word “*ag” come from?
0
The meaning and etymology of the exclamation "Lawdy me!"
5
What does plaster in "plaster saint" refer to?
21
Origin of "It's a fair cop"
3
What is a yard of (pudding, ale, etc.)?