What does “vital” in 'vital wheat gluten' mean? [closed]

Ask Question
Asked 1 month ago
Active 1 month ago
Viewed 550 times
4
Closed. This question is off-topic. It is not currently accepting answers.

I am wondering why it is called vital wheat gluten. How is it vital?

I first heard it here: https://www.youtube.com/watch?v=gysghjYejHw

And then I tried to look it up, but nowhere did I find any mention as to what "vital" actually means here.

In the early 20th century, vital as an adjective was applied to food derived from plants or animals. The Oxford English Dictionary features an early example of this under definition 5 of "vital, adj. and n.":

Huxley was writing a physiology textbook, The Elements of Physiology, and that sums up his definition of vital food-stuffs - "they can only be obtained by the activity of living beings, whether animals or plants" (p. 158). (For Huxley, that is most foods, excluding minerals like salt and water.) By 1899, the Annual Report of the State Board of Health and Vital Statistics of the Commonwealth of Pennslyvania has a more specific understanding of vital foods; they are foods that have not undergone chemical processes like fermentation:

Third. That fermented bread and yeast raised foods and drinks corrupt the blood, and the time has surely come to cease using them in hospitals and institutions, and also to discountenance their general use. Hundred [sic] of families keep entirely well and free from every disease by using unfermented, purely vital foods.

The board perceives unfermented foods as healthier. So there is a sense that the vital in vital foods makes both a dietary distinction and a possible recommendation for good health. As Google Books results demonstrate, the term was widely used in the early-to-mid 20th century in governmental, agricultural, and dietary contexts.

Vital wheat gluten is an offshoot of this usage appearing in the 1950s and after the heyday of vital foods, as highlighted by the Google NGram:

The earliest result appears in the Food, Drug, Cosmetic Law Reporter (1950). Results begin to increase in the 1950s and 1960s in both trade publications and, notably, in US House of Representatives Committee on Agriculture hearings (1965) on Canadian vital wheat gluten imports, where a representative of a company making vital wheat gluten has to explain what it does to a committee member. A couple of brief excerpts highlight that the usage of vital was specialized and not universally understood:

Mr. Purcell: With respect to your end product, are you saying vital wheat gluten -- I do not know what that is.

Mr. Purcell: Just for the record and for my own edification, what do we use vital wheat gluten for, from the human standpoint?

Based on the earlier uses of vital foods, I guess that the vital in vital wheat gluten emphasizes the vegetative origin of what is otherwise a processed food product. Perhaps there are additional connotations of the food being more essential (in the sense of just having the gluten) or healthy.

"vital wheat gluten" is a popular name for purified dried gluten powder, which can be mixed with water and eaten as a vegan meat substitute. It's also known as "seitan"

The word "vital" has probably been added because there is no starch left and it's all pure wheat protein, which is supposed to be a healthier meal.

Vital Wheat Gluten, a powdered form of wheat gluten, is produced and sold as an additive for baking or used to make seitan. Vital wheat gluten is nearly all gluten and almost no starch. When used as an additive in baking, its purpose is to add elasticity to flours that would otherwise be low in gluten, such as whole wheat flour or rye. It improves the rise of the raw dough and also improves the texture and chewiness of the final product. Very little is required, generally about 1 Tablespoon (15ml) per 2–3 cups (480–620 ml) of flour.[12] 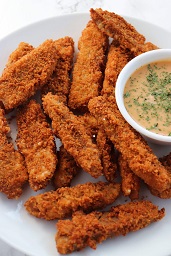 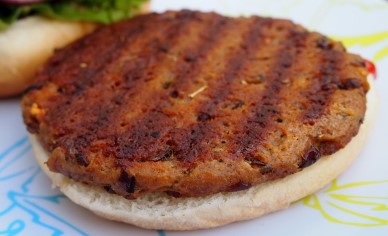