A Physics.SE question had me reading up on D-branes on Wikipedia, where I found the following sentence in the section on black holes:

The concept of black hole entropy poses some interesting conundra.

I had never seen conundrum pluralized this way before. At first I thought it was a hypercorrection, and the citations from Wiktionary would certainly be consistent with hypercorrection.

The Guardian has a long (and hilariously contentious) thread on the topic.

Another blog post from Ask the League of Nerds suggests that both are fine but since conundrum was a cod Latin term to begin with, conundrums would be the really (really really) correct plural.

I thought I'd put the question to this site and get some more scholarly answers (ideally, with citations from reference dictionaries or other reputable sources). Is there a "correct" English plural of conundrum, and if not, which of the two plurals--conundrums or conundra--is to be preferred in usage?

OED gives an etymology of 'conundrum'. That etymology starts with "Origin lost", and continues with expert speculation and the grounds for the speculation, namely that a 1645 use in an obsolete sense ("pun or wordplay depending on similarity of sound in words of different meaning") mentions the word was used at Oxford: "…which in Oxford they then called conundrums."

'Conundrum' is the only entry in OED (3rd Edition; entry not yet fully updated from the 1893 original) with "origin lost" given as etymology. I'm sure that doesn't mean they'll be checking their pockets for it, except perhaps figuratively.

Whether a spelling can be correctly described as 'correct', with all the unfortunate denotative baggage that goes along with the term, I'll leave to those with dogs in the fight. For my part, the game's not worth the candle, etc. However, in terms of expert opinion on the appropriate pluralization of 'conundra', OED weighs in heavily.

In all of OED, 'conundra' appears exactly once, in a 2008 quote, attesting the word 'value-ladenness', from The future of the MBA: designing the thinker of the future.

Setting aside the preposterous arrogance of the book title ("MBA" stands for "Master of Business Administration", certainly not a hotbed of future thinker design) and approaching the issue at hand objectively, the pertinent part of the attestation in OED is this:

So the enormous orthographical and lexicographical weight of OED clearly comes down on the side of their avoiding even the appearance of condoning 'conundra'.

'Conundrums', however, appears thick and fast in the historical record OED gives for the word. Those of the uses that show the word in plural (which appear at a glance to form the majority), use an ess to pluralize it. Notably also, early uses (sixteenth–eighteenth century) display a bewildering variety of orthographic forms, which all are pluralized, when they are pluralized, with ess.

For the sake of completeness and, more importantly, to oblige my curiosity, I also checked the Hathi Trust corpus and Early English Books Online (EEBO) for occurrences of 'conundrum', 'conundrums' and 'conundra' (links for the three words are to Hathi Trust results). Hathi Trust provides access to digitized works (written in English, Latin and other languages) from "Google, the Internet Archive, Microsoft, and in-house member institution initiatives." EEBO provides access to digitized early English books, primarily from before 1700.

The results of similar searches at Hathi Trust are also interesting. Noting that many Hathi Trust results are from different editions or versions of the same original work, the raw numbers are not so immediately telling as simple chronological presence and absence. In the case of 'conundra', discounting false positives and a misdated item, the word does not appear in Hathi Trust texts, from any language, before the 1806 Volume II of Hogarth Illustrated (third edition linked; the first edition, printed 1791, presumably also contains the "conundra" anecdote). 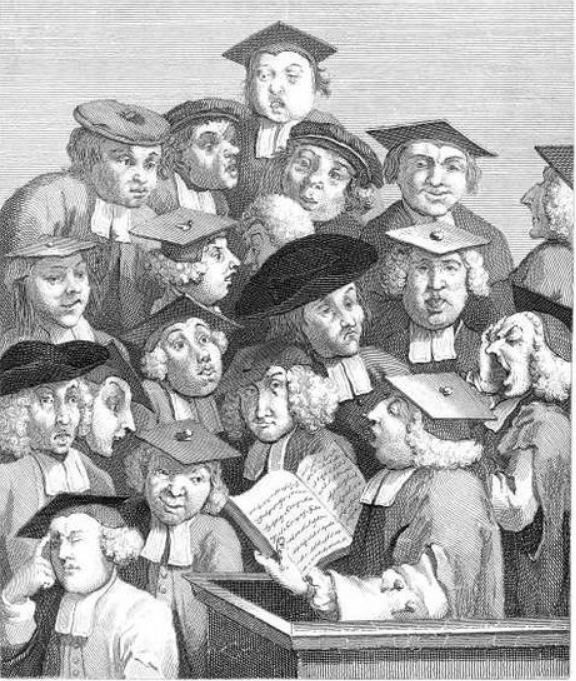 Datur Vacuum
["Leisure Time", punning on "inanity", "is given"]

"No wonder that science, and learning profound,
In Oxford and Cambridge so greatly abound,
When so many take thither a little each day,
And we see very few who bring any away."

…[a highly accomplished young man, who is considered a model by his fellow-collegians] has not stored his memory with many epigrams, but of puns has a plentiful stock, and in conundra is a wholesale dealer.

This use, which is itself jocular, being intended to mock collegians, shows up around 200 years after the first evidence of the singular 'conundrum', which is found in the 1596 printing of Thomas Nash's Haue with you to Saffron-Walden. In the interim (1596–1791?), many works, from Oxford scholars and others, provide plentiful evidence of the plural 'conundrums'.

Such evidence, or rather such an absence of evidence for early use of 'conundra', argues against an origin of 'conundrum' "as a parody of some Latin term of the schools" (OED) although, as OED goes on to observe, that origin "would agree with its unfixed form in 17–18th cent." Surely, it seems, those same parodists or their literary heirs might go the whole hog and form the plural on the same alleged base, the contrived neuter Latin noun 'conundrum', that is, as 'conundra'.

The absence of evidence for 'conundra' in early use does not conflict, however, with the other possibility advanced by OED, that the origin of 'conundrum' was in "some university joke", which also and more likely "would agree with its unfixed form" in early use.

I suggest, as a more palatable speculation than an origin "as a parody of some Latin term", that 'conundrum' might have been formed as a jocular term on the model of the earlier (1553) reduplicating formation 'humdrum' (also not from Latin).

Finally (I hope), Hathi Trust contains only a scant few occurrences of 'conundra' before the advent of widespread quasi-literacy in the 20th century. Only 80 hits result for a search on 'conundra' printed in the years 1807-1901, and many of those (34) represent appearances in various versions and editions of and about Hogarth's works.

In the twentieth century, however, and in my view not coincidentally as expert knowledge of and familiarity with Latin declined, the 'conundra' form shows up with increasing frequency. This is especially true after 1949.

This evidence seems to me to indicate a correlation (which, of course, does not equal causation) between the number of appearances of 'conundra' and the twentieth-century decline of classical education. It suggests that the use of 'conundra', while not a hypercorrection per se, is none the less indicative of growing classical ignorance.

I checked Merriam-Webster's Eleventh Collegiate Dictionary, eleventh edition (2003) and the American Heritage Dictionary of the English Language, fifth dition, to see how they recommend handling the plural of conundrum. As a rule, neither dictionary lists a plural for noun that end in a standard -s form. But both include plural forms when the plural form has some other ending or when there is a significant split in usage.

Here is how these dictionaries treat the plurals of various nouns ending in -um:

album: no plural listed [both]

aquarium: aquariums or aquaria [both]

asylum: no plural listed [both]

auditorium: auditoriums or auditoria [both]

compendium: compendiums* or compendia [both]

conundrum: no plural listed [both]

decorum: no plural listed [MW]; decorums [one sense only, AHDEL]

geranium: no plural listed [both]

gymnasium: gymnasiums or gymnasia [both]

magnum: no plural listed [both]

memorandum: memorandums or memoranda [both]

millennium: millennia or millenniums [both]

modicum: no plural listed [both]

momentum: momenta or momentums [both]

moratorium: moratoriums or moratoria [both]

museum: no plural listed [both]

opium: no plural listed [both]

pandemonium: no plural listed [both]

pendulum: no plural listed [both]

petroleum: no plural listed [both]

podium: podiums or podia [both]

premium: no plural listed [both]

presidium: presidia or presidiums [both]

quorum: no plural listed [both]

rectum: rectums or recta [both]

referendum: referenda or referendums [both]

sanctum: sanctums or sancta [both]

serum: serums or sera [both]

tantrum: no plural listed both]

tedium: no plural listed [both]

ultimatum: ultimatums or ultimata [both]

vacuum: vacuums or vacua [both]

vellum: no plural listed [both]

This is by no means a complete list of English nouns ending in -um. In particular, I have omitted most relevant chemical elements, medical words, and other scientific terms.

The absence of any plural form in the entry for conundrum thus implies that both MW and AHDEL consider conundrums to be the only widely used plural form of conundrum. It also bear noticing that of the -um words listed above, only conundrum and tantrum fall into the etymological category of "origin unknown." To my mind, this makes them more likely to have a simple -s plural form than if they were imports from Latin.

Examples use only "conundrums".

In the case of words ending in -um like "conundrum, bacterium, agendum", we can change the ending to -a, coming up with "conundra, bacteria, agenda."

Of course some of these Latin words (like conundrum itself) have been pluralized with the -s ending as well, but still, their Latin plural forms are also valid.

I also found this quite comprehensive list of such Latin pluralization rules, that might come in handy.

Not the answer you're looking for? Browse other questions tagged etymology irregular-plurals or ask your own question.

2
General Term for Offsets Plural
0
plural form of “thematic”
22
The plural of 'stomach"
3
What is the plural of platinum?
0
Is housewares a double plural?