Should Sporadic usage of Definite Article be placed in the middle of cataphoric usage and zero article usage?

I read from A Comprehensive Grammar of English Language (Quirk, 1985) that sporadic usage of definite article "the" indicates about about location but not a specific one, but an institutionalized one. "We call this the sporadic use of the, because reference is made to an institution which may be observed recurrently at various places and times". When someone says "My sister goes to the theatre every month", with situational usage, we said that his/her sister goes to a particular theatre. But with this new sporadic usage, we can't ask which theatre his/her sister is going to because it will be inappropriate Quirk says in his book.

But now I read another part of the book, "We have already mentioned (cf. 5.33) the use of the in noun phrases with 'sporadic' definite reference, as in the radio, the theatre. In other cases, however, the sporadic use has become so institutionalized that the article is not used." This says that when the same word is used without article (zero article), it becomes quasi-locative (not indicating places, but something abstract). For example:

About "Walk in the prison", the book says that the definite usage in this sentence uses cataphoric usage but "Be in prison" is in zero article usage because it is so institutionalized.

I don't know if this is the right answer, but this is what I found.

The scale is Cataphoric Usage -- Sporadic Usage -- Zero article of Institutionalized, scaled from the indication of place to the abstract, idiomatic meaning.

Cataphoric Usage is definite about location, sporadic usage is about two things, it can be about unspecified (not explaining where the exact) place, or usage that makes reference to knowledge topics, and zero article of institutionalized is telling us about things metaphorical/idiomatic meaning.

Example: (Cataphoric Usage) : My sister goes to the theatre near her house (Sporadic Usage) : I like to go to the theatre about about once a month (Institutionalized {Zero Article}): Gielgud worked for nearly 80 years in theater, film, radio and TV. 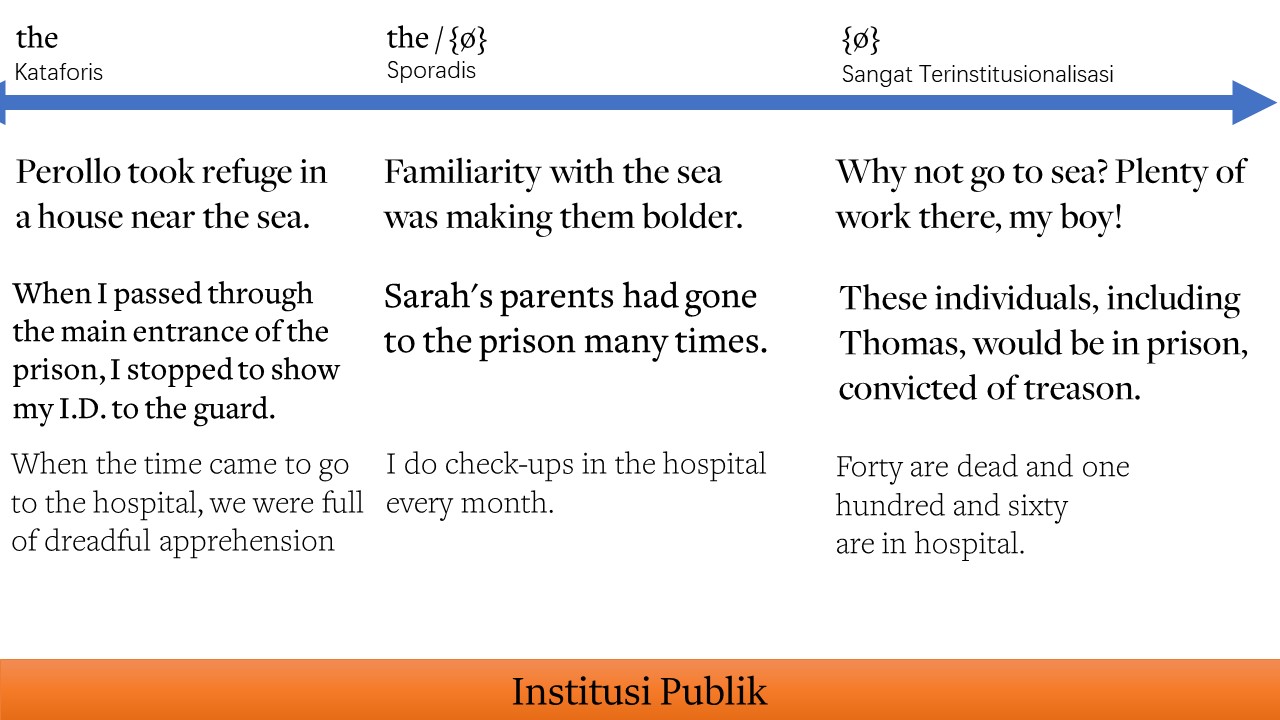 Please, be free to correct this finding if it's wrong. Thank you.

Not the answer you're looking for? Browse other questions tagged articles definite-articles or ask your own question.