What languages are “British” and “English/Irish”?

Found this question on a job application: 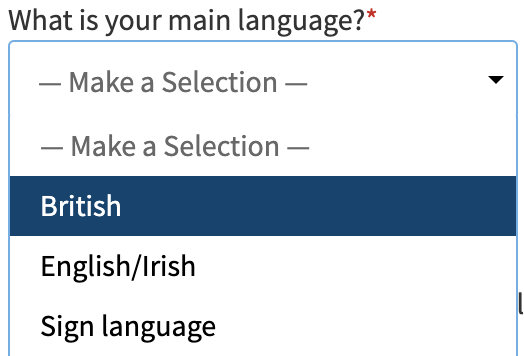 and in text format:

What is your main language?
British
English/Irish
Sign language

I've never seen quite a language combination before. Sign, obviously, poses no issues. I'm not sure what language British refers to; some lazy attempt to retaliate against those who say they speak American? English/Irish makes even less sense, especially when compared to British. Irish should be a layman's term for Gaelic, but when it's slashed together with English what does that mean?

This makes very little sense. I don't think it can be defended on any grounds.

As you say, Irish alone almost always refers to the language belonging to the Celtic subfamily. British is sometimes used in historical linguistics, to designate the language spoken throughout Britain before the spread of Old English, and which survived for much longer on the fringes, perhaps in a dialect continuum with Welsh, Cornish, etc. Irrelevant here.

Edit: The only sense I can make of English/Irish is if it's an application within Ireland looking for bilinguals.

Not the answer you're looking for? Browse other questions tagged meaning terminology or ask your own question.