How did the phrase "back at Square One" originate?

Welcome to square one.

Pop culture has many instances of "Square One". It means "right where we started", emphasising comedically that we have lost all progress (or made none).

Do you know when or where the phrase originated; its first usage; and/or the original scenario, in which it makes literal sense?

There are a few theories about its origin. The most prominent ones are:

As Weather Vane pointed out in a comment, it seems to have come from the board game 'snakes and ladders'. According to KnowYourPhrase:

This game is played on a board that looks like a grid. Players start the game on square one and their goal is to reach the ending square. Progress is made by rolling dice.

'Square one' here means 'square number one' as it's played on a board with numbered squares.

Some spaces on the board have snakes on them. If a player ends up on one of these squares, they're sent back to square number one—the beginning, that's where the phrase comes from.

According to Phrases.org.uk, the earliest citation of back to square one in print currently known is 1952, from the UK publication the Economic Journal:

"He has the problem of maintaining the interest of the reader who is always being sent back to square one in a sort of intellectual game of snakes and ladders."

Another early use of 'back to square one', in the UK newspaper The Liverpool Echo, November 1959, also refers to Snakes and Ladders:

Wikipedia, BBC America and WordHistories also agree with this.

Some sources, however, associate it with another children game called hopscotch.

According to KnowYourPhrase, it may come from 'hopscotch', they've described the game as:

Hopscotch is played with multiple people and the course takes place on numbered squares that are written onto the ground. Players throw a marker into one of the squares and then they try to hop through the course while avoiding the square with the marker in it.

The website further says that if a player makes a mistake such as stepping on a line or losing balance and falling, they can do two things; resume from the square they left off at, or start over i.e. back to square one.

Some sources like Phrases.org.uk, Almost History, WordHistories, Grammar Monster, The Guardian, The Idioms, Apto, TimesOfIndia claim that it comes from football commentary.

They say that it originated from football radio commentaries in the 1930s. In those days, the field was divided into eight rectangles, which were called squares, and the commentators would describe the play by saying which square the ball was in.

The first live radio commentary featured a Division One match between Arsenal and Sheffield United, broadcast on January 22, 1927. A grid of a football pitch divided into eight numbered squares had been printed in the previous week’s Radio Times so the commentator could describe the ball’s location. Square one meant the rear left quadrant of the defender’s side of the field.

Most people, however, disagree with the last theory, for instance, as BBC America explains:

The other problem is that square one was where you’d think it would be, the bottom left-hand corner of the map. That’s not where football plays start from. To reset a game, you start again at the centre spot, which is at the meeting point of THREE, FOUR, FIVE and SIX.

The earliest print evidence of the use of 'square one' in the figurative sense, "the beginning, the starting point" (OED), has previously been thought to be in a 1952 book review published by The Economic Review. My research, however, uncovered a 1946 use in F. van Wyck Mason's Saigon Singer:

"And now, mon Commandant," she said brightly, "I'm over my crise de nerfs. You may consider me back in Square One."
"'Square One' in French sounds silly. Let's talk English." Though speaking lightly, he had definite reasons for making the suggestion.

Nothing of the intrinsic context offers a clue to the origin of the phrase, although the character's opinion that it "sounds silly" in French suggests it perhaps did not come from French.

The book reviewer's 1952 use of the phrase embeds a reference to an ancient board game called snakes and ladders:

Withal he has the problem of maintaining the interest of a reader who is being always sent back to square one in a sort of intellectual game of snakes and ladders.

The reviewer's analogy is sloppy, at best, and wildly inaccurate in fact, as shown by a 1904 illustration of the game board, and accompanying description. There, the game is called Moksha Patamu or "A Picture of Final Deliverance": 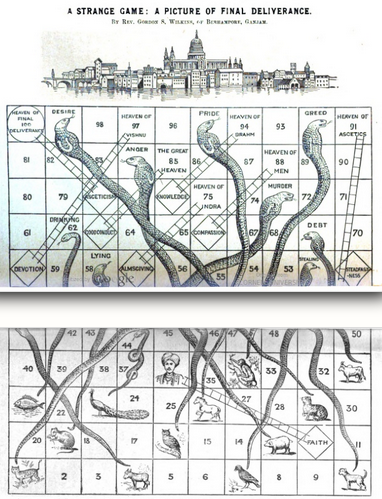 So square 36, not square 1 is the starting point. Further, it becomes evident after study of the board and instructions that the only way to go 'back to square one' is to land on square 73, "Murder", where the snake causes a figurative death and rebirth as a tiger on square one.

Thinking the 1904 illustration might represent an unusual version of the game, I checked more than 100 other incarnations of the board, from 19th century Victorian England versions through the ridiculously toned-down 1943 US version (now called chutes and ladders, because, you know, we can't have those scary snakes causing death and rebirth in a children's game!), and found that although other versions of the game might start on square 1, no version incorporated multiple ways to return to square 1. At most, landing on only one of many possible squares returned the player to square 1.

These facts disqualify snakes and ladders as the origin of the figurative use of 'square one', in much the same way that "square 1" in the 1927 Radio Times visual key to broadcaster football commentary, not being the starting point of the game, disqualifies that origin. 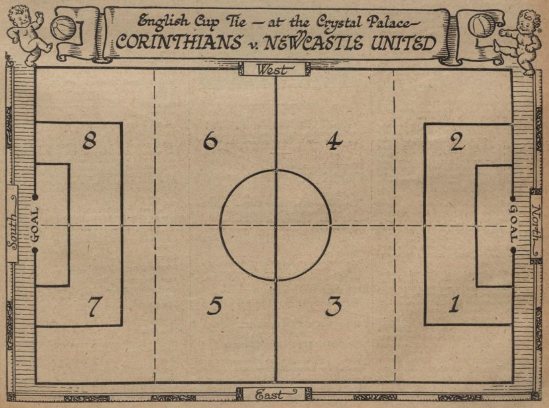 Were it not for a niggling sense of unease caused by the semantic fluidity of the 'square one' metaphor, the facts would lead me to endorse hopscotch (versions) as a potential origin; however, I suspect that "square 1" is a natural metaphor for "the beginning" among English speakers conversant with basic arithmetic concepts. As such, no origin other than what is part and parcel of speaking the language, and understanding the significance of "1", was needed for the metaphor 'square 1' to emerge.

This is not to diminish the possible influence of hopscotch and simple board games, or other more esoteric sources such as the closed knight's tour, on the emergence and establishment of the now-common metaphor. Rather, it is to say that the 'square 1' metaphor stands, and is readily understood, without reference to any source or origin other than the meaning of the words and the number: number 1 is, after all the first number (when 0 is nothing), whether in a square or out of one.

The idiomatic expression appears to date back to the sixties:

square one (n.) the image of children’s board-games, e.g. snakes and ladders

(orig. US) the starting point, the beginning.

Not the answer you're looking for? Browse other questions tagged etymology expressions phrase-origin pop-culture or ask your own question.