Which one is more idiomatic: ‘valid concern’ or ‘legitimate concern’?

I am looking for an adjective for the word ‘concern’. I want to say that the concern is one of the cases where one should have concern, that is, there are good reason to have such a concern.

Example: The concern about fundamentalism is a ———— concern.

I have come down to two words ‘valid’ and ‘legitimate’. I don’t know which one is better. Or maybe they are equally good. Or maybe there is another better word that I don’t have in mind.

It might be a bit subjective. But as far as I become sure that each or both goes perfectly in that context, I get my answer.

The following Google 2grams would indicate that 'legitimate concern' is the more frequently used of your alternatives, but also that 'proper concern' where 'proper' reinforces that people should have concern here (rather than it's all right to have it) is also idiomatic. 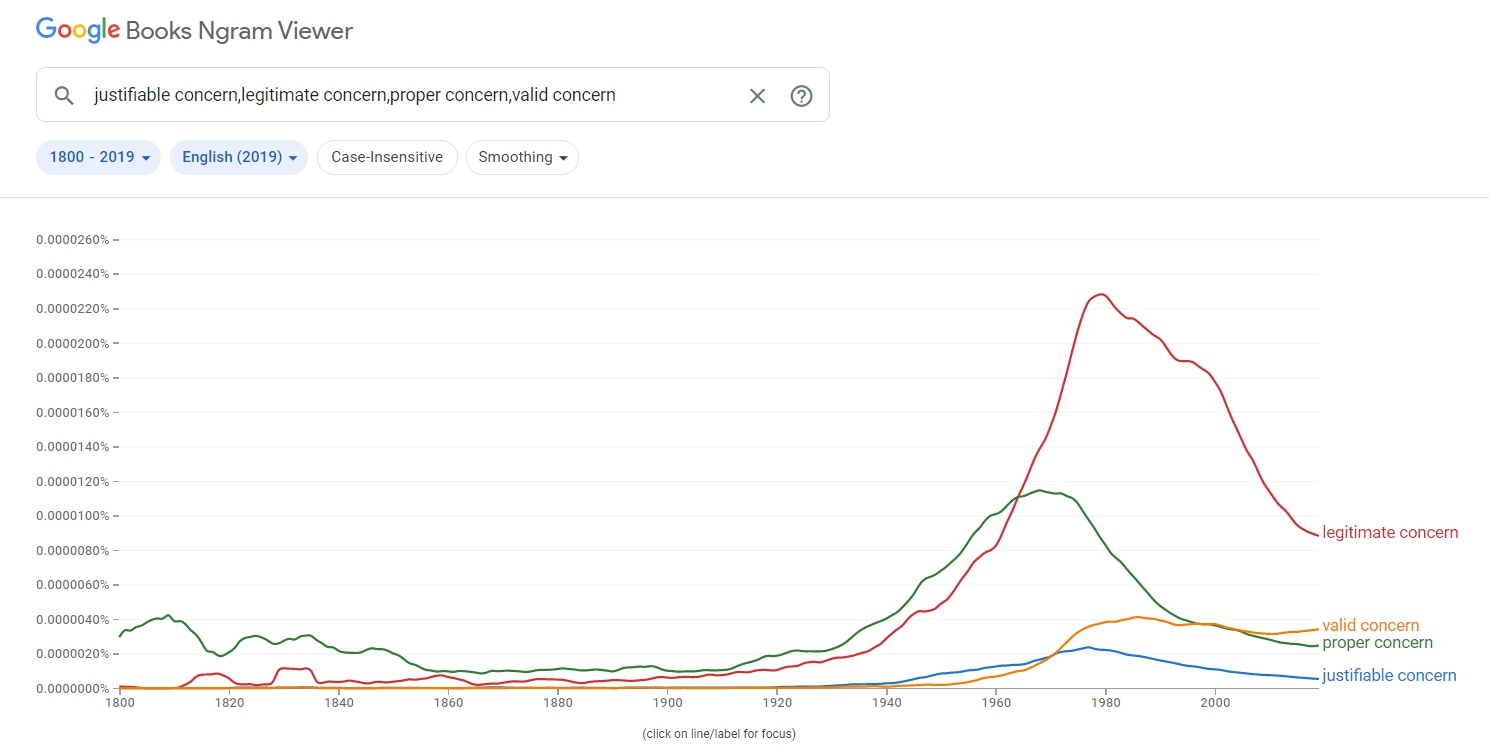 The following senses of proper [Cambridge Dictionary] are relevant:

2 considered to be morally good

It is a formal and some would consider dated sense, but the Ngram and high listing in both the dictionary senses show that it is far from moribund.

Although legitimate does carry the sense of 'being good and worth considering' as well as 'lawful', as seen in this sense given by Merriam-Webster:

b: genuinely good, impressive, or capable of success

it does not carry the 'duty-bound', moral obligation sense that 'proper' does.

While both valid and legitimate can be used in this context, the problem with them is that, in the present-day usage, they involve a certain amount of ambiguity. Sometimes, one may say that a concern is valid or legitimate when one in fact shares it, and thinks that everybody should. Sometimes, however, saying that a concern is valid or legitimate, if its meaning were fully explicated, would amount to something like this:

If one wants to convey the idea that there is something rationally compelling about the concern, and that everybody ought to share it, then well-justified concern is more likely to accomplish the purpose unambiguously. What would probably be even better is to not insist on an adjective, but instead say something like 'a concern for which there are good reasons'.

Not the answer you're looking for? Browse other questions tagged idioms adjectives or ask your own question.

2
Words for Product Status labels
14
Where did the “juices” in “creative juices” come from?
0
“A […] of riches” — what word is missing?
4
Is there an adjective that can be used for “increased storage capacity”
3
Adjective meaning “greater than one”
1
Single word for-A man who is polite and kind towards women
0
Adverb/adjective to mean something is the main purpose?
1
“There is good reason” vs “there is a good reason”