Is there a word for when something looks correct when wrong?

I used to perform magic and I thought there was a term for this.

This is the concept behind optical balance or compositional balance, which is part of the Gestalt theory that a design needs to "feel right" as a whole, rather than simply adhering to geometric definitions that may be quantitatively "correct" but look wrong.

This website shows some great examples of designs that simply look better when the quantitative rules are ignored. Examples include making shapes different sizes so that they appear to be the same size, darkening colors on text so that it appears to be the same color as an adjacent shape, or misaligning text so that it appears properly aligned. Subtleties in the human visual system can cause us to see differences where there actually are none, so sometimes a design will purposefully make things "wrong" so that they appear to be "right".

This sounds like a paradox illusion. If this is obvious skip to the bottom.

An instance of a wrong or misinterpreted perception of a sensory experience.

From that we have the broadly-termed optical illusion...

An optical illusion (also called a visual illusion) is an illusion caused by the visual system and characterized by a visual percept that arguably appears to differ from reality. Illusions come in a wide variety; their categorization is difficult because the underlying cause is often not clear, but a classification proposed by Richard Gregory is useful as an orientation. According to that, there are three main classes: physical, physiological, and cognitive illusions, and in each class there are four kinds: Ambiguities, distortions, paradoxes, and fiction

The most common examples I can think of include Escher drawings 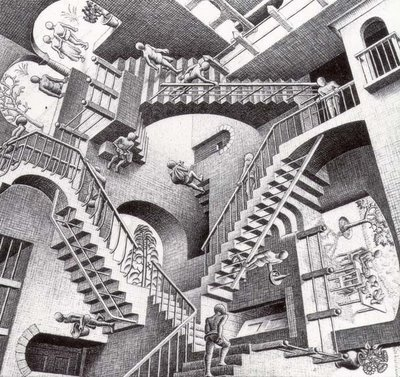 ...which are sometimes called a paradox illusion.

Other examples of optical illusions from the 1960s abound...

A complete list of the classes of illusions can be found at Wikipedia.

[Emphasis in citations is mine]

19
Word for when something wrong is made to seem normal because it is common?
16
Word for when one uses the wrong word in a sentence
1
Is there an umbrella word for cancer treatment?
4
Word for sensation of lifting an unexpectedly light object?
9
Word for how well something actually works
3
Is there a word for the 'art' of creating amulets?