What does the word 'epithelium' have in common with the word 'nipple'?

I use etymology to understand concepts better.

I was checking epithelium and to my surprise it comes from Greek θηλή which means nipple.

I don't understand the reason behind this naming.

Can someone please explain it to me?

Yes, one can parse the word 'epithelium'

epithelium - a membranous cellular tissue that covers a free surface or lines a tube or cavity of an animal body and ...

because that's how it was coined in 1703 by Frederic Ruysch in his Thesaurus Anatomicus vol 3.

Ruysch created the Latin term from the Greek epi, which means on top of, and thele, which means nipple, to describe the type of tissue he found when dissecting the lip of a cadaver.

Ruysch was writing in Modern Latin and coined it out of Greek terms. The first use of 'epithelium' in English is attested by the OED:

It was coined so the only explanation of the derivation would be from Ruysch's personal choice.

The explanation of that choice is not that there is any particular resemblance of the gross anatomy of a mammary gland nipple to the structure of the tissue of the inner lip, but rather that the lip tissue, while similar to skin tissue, is not the same.

So he named it not 'epi dermis' but 'epi thelia', 'thelia' (Latin papilla, English nipple) being the term already chosen for the kind of tissue seen in the lip.

This now kicks the can a little further down the road. 'Epithelium' was coined by Ruysch, but what is the provenance of 'papilla' (or nipple) for the tissue underneath the surface of the lip (or cheek)? This is straightforward visual analogy as that tissue looks like a series of little nipples. 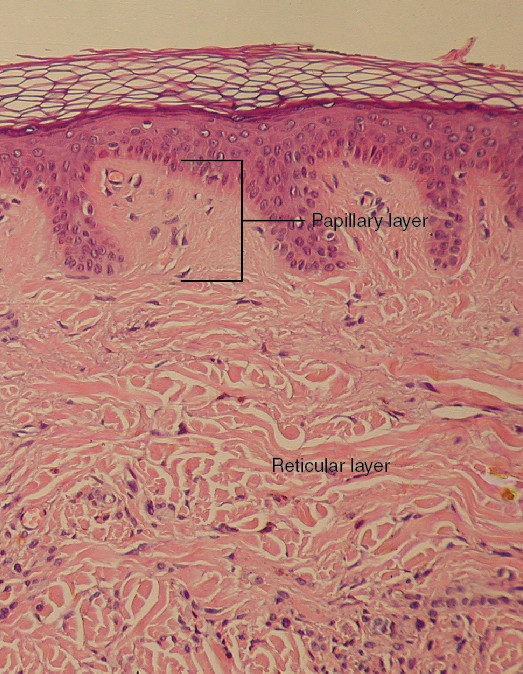 So in the end the reason for the use of 'thele' (= nipple) for flat looking tissue is that under a cross section it looks like a whole bunch of little protuberant nipples.

Exocrine glands secrete mucus, saliva, earwax, oil, milk, digestive enzymes and other cell products. These products are released through ducts or tubes. In contrast endocrine glands do not have ducts.

epithlial cells are divided as below: 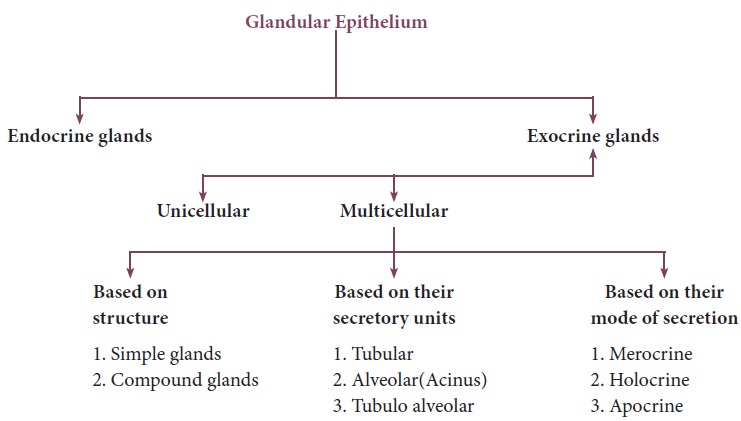 Having external secretion; designating or pertaining to the discharge of a secretion through a duct or the secretion itself.

then we have the function of the nipple in mammals: "the discharge of a secretion through a duct"

This seems the most obvious origin at a point before the detail of the diagram above was known.

The OED records it as from the mid 18th century:

I'm surprised at the lateness of this. I can only think that the (indistinguishable) Latin (epithelium) must have been used before this

As mentioned by the venerable Greybeard, epithelium doesn't have much history in English. I haven't been able to discover much more history in Latin. None of the history mentions the reason the epithelium is called "upon the nipple". So I looked, and a reason is suggested by this image (epithelial cheek cells): 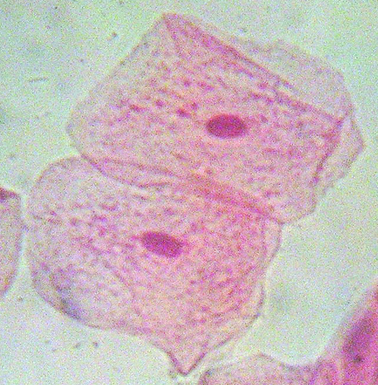 All the uses of epithelium, including those in the Latin texts, come after development of microscopes capable of showing single cells. So the name might have been suggested by the appearance of the cells as seen through a microscope. Against that theory, the fact that any single cell with a prominant nucleus would appear similar.

TLDR: One French dictionary says that that the Latin word epithelium was first used to describe the skin that covers the nipple.

One possible answer is found in le Trésor de la langue française informatisé (The Digitized Treasury of the French Language). For épithélium, it gives the etymology:

Scientific Latin epithelium (from the Greek ε ̓ π ι ́ “on” and from θ η λ η ́ “nipple”; the word having been first applied to the skin that covers the nipple of the breast).

I think I may have hit upon the rather unpleasant solution.

Here is a picture of a cancer made up of squamous cells. This would have been known of in ancient Greece. It has the appearance of a nipple.

5
Relationship between kingdom, dominion, and doom
7
Etymology of "hysteresis"
1
Etymology: 'to commit'
1
Etymology of "amoral"
0
How did "out, away" + "to play" combine to mean 'elude'?
9
How did "lunatic" evolve to mean "crazy"?
4
Why should etymology stop where it does?
6
Etymology of the word *plane* as used in *airplane/aeroplane*
0
Semantic connection behind the etymology of "category?"