Did the definition of Misogynist change?

I was looking in the library at my university, and found a yearbook from somewhere in the 1870s-80s. For the graduating class, the put their major, political party, religious denomination, and 'remarks'. Some of them were 'normal' stuff like "British Citizen", or "Believes in co-education of sexes". But one of them that stood out to me simply said "A misogynist". Did that word have a slightly different meaning in the 1870s-80s? Or is this a better question for a history stack exchange, to ask if this was a 'normal' thing to say back then? 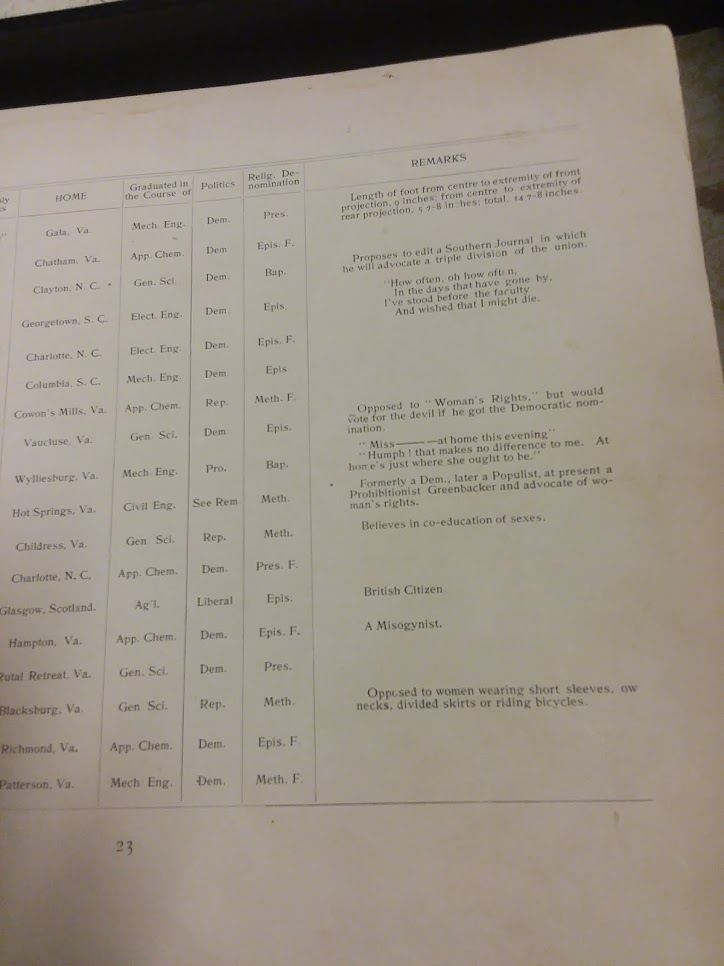 It's the distinct context of the yearbook that makes it hard to understand the intent behind misogynist.

The meaning of a misogynist hasn't changed much. In the 1857-9 novel The Virginians, William Thackeray calls Henry Warrington a misogynist at the end of a conversation, and then adds an editorial comment against the attitude:

"And so the little country nymphs are gone, or going, sir?" asked the Chaplain. "They were nice, fresh little things; but I think the mother was the finest woman of the three. I declare, a woman at five-and-thirty or so is at her prime. What do you say, sir?"

Mr. Warrington looked for a moment, askance at the Clergyman. "Confound all women, I say!" muttered the young misogynist. For which sentiment every well-conditioned person will surely rebuke him.

What makes Mr. Warrington a misogynist is his strong dislike of women, at least at this point of the novel. The narrator notes that his misogyny isn't something that a "well-conditioned person" would condone. That's still true today.

If being called a misogynist (i.e., a woman-hater) is widely considered a bad thing then and now, why would a student be called that in a yearbook? Yearbooks have often been jocular texts, places where the students can poke fun at one another with labels, pictures, senior quotes, and class titles. Here's what an article about the early history of Swarthmore's yearbook says about the humorous tone of the book:

The early yearbooks resemble humor magazines, with a section devoted to roughly drawn cartoons and jokey poems. One of the goals of the 1889 Halcyon describes that of many succeeding ones: to present “a delineation of the follies and foibles of student life,” including lighthearted descriptions of individuals.

There is also a strong tendency toward clubbiness, with plenty of small, silly groups like 1890’s women-only “The Adipose Tissue Association,” whose motto was “Laugh and Be Fat.” Each class is treated as a kind of club, with its own cheer (“Re, Rah! Re, Rah! ’89 Re, Rah!!”), colors, motto, and badge. Freshmen are hazed—forced into midnight immersions in the Crum.

The intention behind misogynist can be celebratory or critical, joking or hazing (or both), and it's often hard to tell. For example, see a few of these literary quotes selected for seniors from the 1897 yearbook for the University of Tennessee, The Volunteer:

That third quote, "A poor, weak, palsy-stricken, churchyard thing"? It's hard to know whether Essery was howling along with his classmates or whether those were fighting words. They could've been both! Misogynist reads in the same register.

Based on the the other student comments in the Yearbook, I'd have to agree with what @nick012000 said in the comments: It's pretty clear that there was some kind of running discussion/argument/debate about women's rights around or just prior to the student's providing their personal comments to the Yearbook. In all likelihood, someone called someone else a misogynist (deprecating, even back then) and they decided to own it, though whether as exaggeration or irony is unclear.

I suggest you remember the quote from L.P. Hartley's The Go-Between (1953)

"The past is a foreign country; they do things differently there."

The meaning of misogynist has not changed from when it was first recorded 400 years ago:

A. n. A person who hates, dislikes, or is prejudiced against women.

1620 Swetnam Arraigned i. ii. sig. A 4 [Mysogenos loq.] Swetnams name, Will be more terrible in womens eares, Then euer yet Misogenysts hath beene.

1995 New Yorker 19 June 34/2 It's an incongruous scene, where old-school misogynists mix it up with radical feminists.

There was little concern for political correctness in those days. I imagine that all these people were men. It is clear that some were opposed to feminism and, in particular, one of them simply hates all women (or professes to).

At the time there would be no backlash concerning this. He was simply stating his opinion.

31
How does the "be-" prefix change the words to which it is applied? How did it come about?
9
Why did "ich" change to "I"?
26
Why did the meaning of “garble” change so much?
3
Where did the phrase "you're it" come from in tag?
15
How did the term "worthless" come by its current definition?
11
Did the meaning of "significant" change in the 20th century?
0
Why did 's' in 'wisard' change to 'z'
6
When did the change occur in meaning of Afghan from an ethnic group to "person from Afghanistan?"