How were 'eyes' and '-ies' pronounced in Shakespeare's times? [duplicate]

Ask Question
Asked 7 months ago
Active 7 months ago
Viewed 141 times
3
This question already has answers here:
Was the pronunciation of “symmetry” different in the past? (6 answers)
Closed 8 months ago.

Reading through 'A Midsummer Night's Dream' I've noticed that Shakespeare repeatedly rhymed 'eyes' with some of the words ending with '-ies' (e.g. 'companies', 'qualities'). Obviously that means that the pronunciation of these words must've changed, but the question remains - which ones? 'Eyes'? '-ies'? Both?

He wrote a magnificent volume by the name of "The Oxford Dictionary of Original Shakespearean Pronunciation" in 2016, in which he gives a detailed catalog of the distinct and numerous archaic spellings and pronunciations for each word during the Jacobean period (with the printing of the folios and quarto editions), and the words that they rhyme with according to each play.

I recall finding a similar incident with the word "again":

1.WHen shall we three meet againe?/ In Thunder, Lightning, or in Raine?

Here is what the beforehand mentioned "Oxford Dictionary of..." (by DAVID CRYSTAL) puts for the pronunciation of the word "eye": for A Midsummer Night's Dream see "MND" 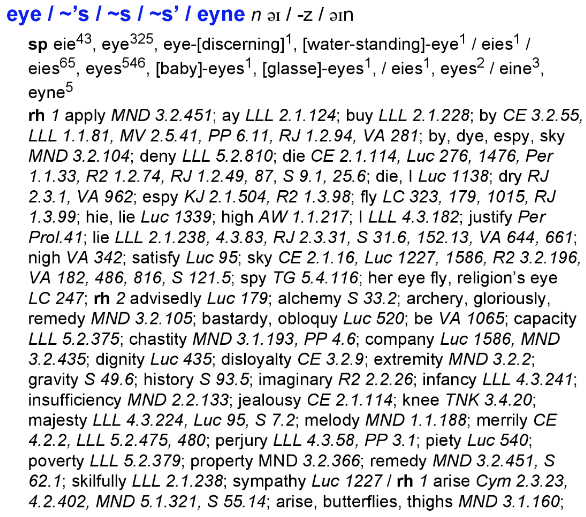 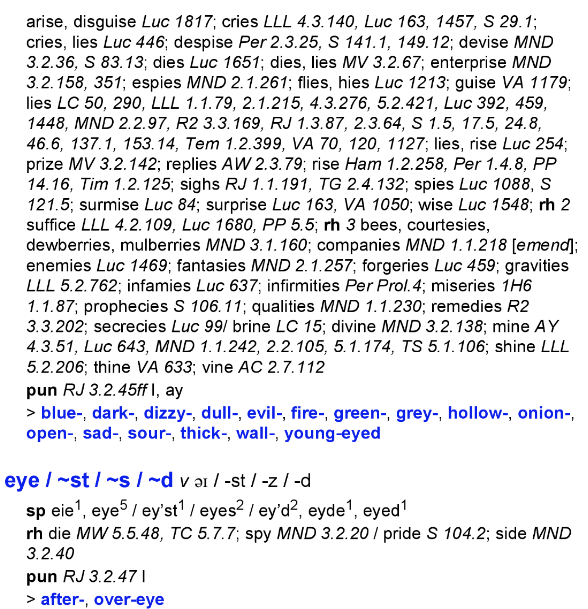 P.S. It seems the rhyming of "eye" and words with "ie", "y" endings (such as quality, company; after your given examples) was continued into the 18th and maybe even 19th century, (at least 1794) with Blake's immortal "Tyger, Tyger burning bright" (The Tyger) poem:

What immortal hand or eye, / Could frame thy fearful symmetry?

Also, it is found an "innumerable" amount of times in the Folio and also any 16th to mid-17th century text, words which in Our modern spelling end with a "y" syllable, were spelled rather with an "ie" (and as well, sometimes with a "y"--see Lady Macbeth's "out, out damned spot" spelling in the folio where the word "fie" is spelled "fie" and then "fye" in the same line)--(see examples like: "tragedie", "comedie", "fithie", "companie") Words were spelled the way they sounded.

Not the answer you're looking for? Browse other questions tagged pronunciation history phonology phonetics rhymes or ask your own question.

31
Was the pronunciation of “symmetry” different in the past?

18
When is it appropriate to use the original pronunciation of a foreign word versus the English pronunciation?
2
Why do the first and last “t” in “taste” sound different?
4
Why do American English speakers pronounce both syllables in “challah” equally?
37
How far back in time could I travel and still be understood?
4
Intensification of Consonants in English Pronunciation
4
“Initial” is pronounced “inishal,” so why isn't the verb “initiate” pronounced “inishate”?
17
Why is /sɪ/ pronounced differently in “six” /sɪks/ and “sit” /sɪt/?
0
Are the 'esk' sound in grotesque and burlesque pronounced the same?