In which US accent is “again” pronounced /əˈɡeɪn/ with the FACE vowel, not /əˈɡɛn/ with the DRESS vowel?

Most dictionaries provide the US pronunciation of “again” as /əˈɡɛn/ (uh-gen) with the DRESS vowel. This is the most common pronunciation in the USA.

However, I think I might have also come across /əˈɡeɪn/ (uh-gain) with the FACE vowel. This sounds like the word “gain” with an “a” at the beginning.

Is there a US accent where “again” is pronounced this way?

According to the Dictionary of American Regional English (DARE, paywalled), 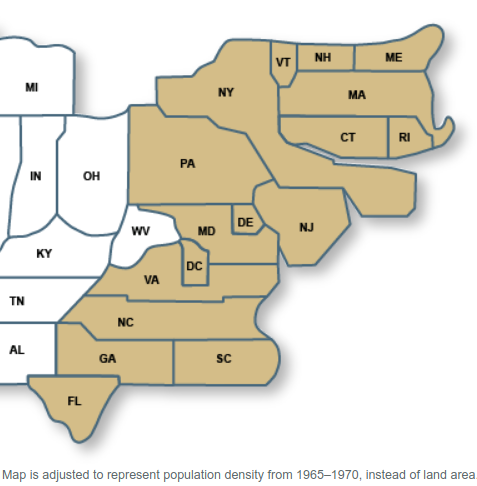 The "broadly phonetic" |e| in a DARE head entry is pronounced as in 'bait',

(note that the "narrowly phonetic" [eɪ] in DARE fieldwork quotations represents the upgliding variant of |e|, while for |əˈgen| the other variant of |e| noted in DARE, the ingliding variant [eə] "appears in Midland speech territory" [quote from Allen, Harold B., The Linguistic Atlas of the Upper Midwest, 3.270; Minneapolis MN: Univ. MN Press, 1973–1976.]).

DARE's authority for the claims is partly from Kurath, Hans and Raven I. McDavid, Jr., The Pronunciation of English in the Atlantic States; Ann Arbor MI: Univ. MI Press, 1961 (linked book can be borrowed for an hour with a free account; discussion of 'again' is on p. 131, with referenced maps showing collection sites on pp. 244-5):

The vowel /e/ of pain is decidedly uncommon in again and exhibits no marked social dissemination. It occurs especially in parts of New England, on Delaware Bay, in Tidewater Virginia and northeastern North Carolina (highly conservative areas), and again in the Savannah Valley; only scattered instances are found elsewhere.

Rare cases of /əgæn/ with the vowel of pan occur in the North and the North Midland.

However, in addition to Kurath-McDavid 1961, DARE's claims rest on data from their fieldworkers:

A couple of other things worth mentioning

For many if not most US English speakers 'of a certain age', |əˈgen| is likely to be at least glancingly familiar. In Safire's Political Dictionary (1978, 1993, 2008), Safire explains Franklin Delano Roosevelt's oratorical fondness for the tricolon device 'again and again and again':

"Evidently," said Sherwood, "you've got to say it again — and again — and again."
Roosevelt liked the phrase, especially since his own pronunciation of again was distinctive in U.S. speech, rhyming with rain rather then when.

Anybody exposed to FDR's later (post-1940) "fireside chats" and other speeches, whether in person, as historical recordings, or as parodies, might thus have heard |əˈgen| repeatedly. Undoubtedly also, FDR's "distinctive" pronunciation influenced idiolects and sociolects in ways that still reverberate today.

In the FDR media influence context, though, I should also mention the "common misperception that the advent of [motion pictures, radio and television] led to a homogenization of American English" (quote from "Rful Southern", a 2005 article by John Fought at pbs.org). Another 2005 pbs.org article, "Talk the Talk?" by Jack Chambers, linked from "Rful Southern", makes a case contradicting elements of that "common misperception" in some detail. Chambers observes, for example, that there

is zero evidence for television or the other popular media disseminating or influencing sound changes or grammatical innovations.

This is not to say that homogenization of US English regional pronunciations is not now and has not been ongoing for a long time. Rather, the claim is that the causes of any such homogenization are not well enough known to foster easy, general classification or prediction of individual sound pattern changes. Without timely and detailed specific evidence, then, it is premature to conclude that regional distribution of |əˈgen| is today becoming less rather than more defined, or that the incidence of the pronunciation is diminishing, rather than increasing.

James W. Hartman, in the DARE "Guide to Pronunciation", addresses the complexity and difficulty of timely dialect pronunciation studies more generally, and also more directly, than Chambers (bolding mine):

The details of variation in AE pronunciation are highly complex. The amount of data needed to establish patterns in individuals, social groups, regions, and circumstances of style and linguistic context is enormous. Constant change, moreover, rapidly or slowly erodes the applicability of data collected at any given time. And there are local, even neighborhood, pronunciations that are yet unrecorded. The pronunciation features discussed here should not be unduly generalized—they are, of necessity, taken from individual speakers at a particular time. Nevertheless, patterns of pronunciation do tend to be stable, as evidenced by the fact that many young speakers still exhibit the same regional features described in studies done nearly three generations ago.

Here are statistics on the pronunciation of "again"; "ai" is both monophthongal and diphthongal in both the UK and the US. The statistics for the UK is given for comparison. It is clear that the form "ˈɡɛɪn" is very rare in AmE (3%); however there is no mention of any particular region in the US.

Not the answer you're looking for? Browse other questions tagged american-english pronunciation accent or ask your own question.

2
/əˈɡɛn/ or /əˈɡeɪn/?
3
Why do Southerners pronounce “naked” differently?
3
Pronunciation of “again”