Does calling something a 'Novelty Act' bring down its image? [closed]

I'm really confused with this one, if one calls some performance a 'Novelty Act' does it imply they're trying lower its image or is it just neutral?

Well, I looked it up on the internet and it says that a Novelty Act is something which the audience would find amusing at first but soon its novelty wears off.

So if I use this definition, then I think it's not really good for something to be classified as a Novelty Act, or is it?

That's what I've been pondering about.

In short, when one uses the phrase, does it have to be preceded by an adjective describing it as good/bad or is it, as I mentioned above, implying something negative just by itself?

It'd really be helpful if you could include some examples with the answers.

Calling a performer a "novelty act" implies that their primary appeal is their novelty, rather than their actual abilities or talents. As such, it frequently carries a dismissive meaning, as though such acts do not have "real" talent. Novelty acts are often contrasted to acts that have staying power: those with enough talent & appeal to "stay around" for a longer period of time.

LMFAO have proven that they are no novelty act. The familial duo of Redfoo (Stefan Kendal Gordy) and Sky Blue (Skyler Austin Gordy), known for crazy outfits, wild hair and even wilder music, have proven their staying power three years after their initial hit, and have provided the song of the summer with “Party Rock Anthem.”

Review + Photos: The Darkness at The Regency Ballroom

The late, great Lemmy Kilmister once referred to The Darkness as a novelty act, and there are still those who are quick to dismiss the band as nothing more than a slightly amusing, glam-metal piss-take. ... But while no one would mistake the Darkness for serious artistes, they are far more than a novelty.

Getting into the baking world after acting meant Sarah Michelle Gellar had to work hard to be taken seriously.

“I was a novelty act,” the 40-year-old told Page Six of her company Foodstirs at a UN Women forum on Thursday. “People think it was easier to get in the door, sure, but they just wanted to see how Buffy bakes, you know?”

Before the days of television or the movies, people would go to see live performances in their local theatre. Usually these were variety shows.

The staple fare of these shows was singing, dancing, juggling, acrobatics and comedy. A troupe of players would travel around the country, performing the same act wherever they went.

Often the show would include a novelty act, that is to say an act that wasn't of the usual sort.

Maybe there would be trained animals or an escapologist or something that people in those days wouldn't have seen before. They were called novel for the very reason that they would be new to the local audiences.

For example, in the following show, I imagine that the performing frogs would be very much a novelty! 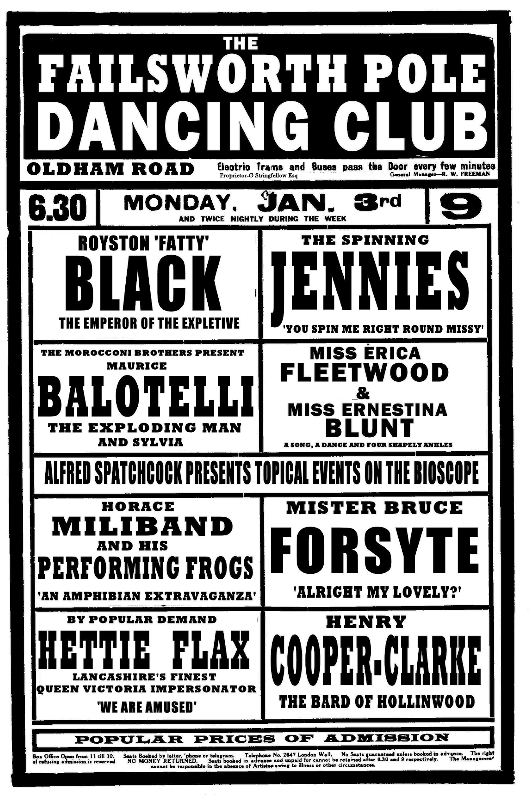 Most acts can evolve with time. Singers can learn new songs, dancers can learn new dances, and so on. This meant that these standard acts could tour the same locations with new material. The problem with novelty acts is that the second time someone saw them, they would no longer be a novelty.

Thus a novelty act is one that makes a big impression initially but becomes boring once the novelty has worn off.

@Sven Yargs has pointed out that the poster I showed is a modern spoof. My problem was finding an original that was easily readable. Here's an old-fashioned poster for those who are interested. Marie Lloyd was a famous music-hall performer.

Well, I looked it up on the internet and it says that a Novelty Act is something which the audience would find amusing at first but soon its novelty wears off.

Hmmm...let's see. Weird Al has been releasing parodies since about 1983.

So, after about 30 years, he's lost so much popularity that his new album only made it into the top 10 in 3 countries.

I Lost on Jeopardy was a parody of a Greg Kihn song. Greg Kihn's first album to make it into the Billboard 200 was Next of Kihn, in 1978. The most recent, was Citizen Kihn in 1985, so they had a run of almost 7 years.

Gump was a parody of Lump by The Presidents of the United States of America. They released two ranked albums, in 1995 and 1996, plus a compilation album that was ranked #198 in the UK in 1998.

Ricky was a parody of Toni Basil's "Micky". Toni Basil released albums in 1983 and 1984. The latter didn't chart as an album, but did contain one single that made it into the US Dance music chart.

Lest this get boring, I'll just list some more:

Green Day just released a new album this year. I can see Lady Gaga releasing more albums. Madonna might also. These will be noticeable to at least some degree. Greg Kihn (for one example) still seems to be cranking out new albums every few years, so I guess it wouldn't be a big surprise if he released at least a few more. Not likely to get a lot of interest though.

There will probably be at least a few more releases of material done by Nirvana, Queen, and Michael Jackson at some point or other. Not new material (obviously) but new releases of old material.

Weird Al is certainly a novelty act by most definitions. He's continued to release new material for far longer than most of the acts he parodied. In fact, at least out of those listed above, the only one I can see who really competes with him for longevity is Madonna (and potentially those that are still active, like Green Day and Lady Gaga). Quite a few of them had at most an album or two that sold reasonably well, but the number releasing reasonably successful albums in 3 or 4 different decades...is pretty small, to say the least.

So to answer the question directly, I'm going to say: "No, not necessarily".

Not the answer you're looking for? Browse other questions tagged meaning word-usage meaning-in-context ambiguity or ask your own question.

7
What does Agatha Christie’s line, ‘Speak through one’s nose full of b's and d's’ mean?
5
What does the slang term "Joe Gland" mean?
7
Roger Ascham his language
1
"Let's bring it down in scale a bit", What does it mean?
1
Bring someone back (down) to earth?
2
Is 'deconfigured' a valid English word or could you suggest an alternative
4
Bring down the hammer definition/meaning/etymology
1
What is the origin of the phrase "play a part/role"?