Origin of "around the bend", meaning insane

…that Trump had said at one of his rallies that the country had "turned the corner" on the pandemic.

“As my grandfather would say, this guy’s gone around the bend if he thinks we’ve turned the corner. Turning the corner? Things are getting worse,” Biden said.

I do not recall hearing this expression until after I moved here to Latin America. The first time I heard the phrase was from my distant great-aunt in the early 90s. She was born in Liverpool in 1917, was a "land girl" during the "blitz" , and then married a diplomat from here in Guatemala in the 50s.

You might use this phrase for something that drives you batty: "I didn't go around the bend until we got our fifth dog." You could also say, more seriously, "It might drive her around the bend when she hears that her son's in trouble again." The origin isn't clear, as some word experts suspect it has a nautical origin — a bend is a series of sailors' knots — while others think it's related to long, curved driveways leading to mental hospitals.

….the earliest reference to this saying predates the building of most public asylums and states that it is specifically nautical slang. Quinion remarks that the metaphor is close in meaning to "loopy"; Brewer's "Phrase and Fable" suggests that it is related to the metaphor contained in "having funny/queer turns"; i.e. that a person who just has queer turns may still be more or less OK but if you go beyond having queer turns and go "right round the bend" you're completely mad. At any rate, the metaphor appears to be to the twists of one's mind, not a carriage drive. (The more so as Victorians preferred their carriage drives to be curved ina fine elegant sweep, so even if asylum drives had routinely had a bend in them, that wouldn't have made them in any way special.

So…can anyone nail down the first usage and etymology of the phrase?

The foremost red herring that obscured the origin of 'round the bend' appears as the first attestation of the phrase in OED:

Sea Slang is a compilation of slang, and so not the first use of the phrase, and likely not the first appearance in print. The idea that 'round the bend' was an "old naval term", however, prompted me to search military slang glossaries. That, in turn, led me to "Harpic" and Nevil Shute's 1951 Round the Bend (see material under "Harpic" at both links).

Shak Lin is called Harpic because he is Clean Round The Bend…. Harpic is the name of a famous English toilet cleaner whose motto was Cleans Round The Bend. In Shute's flight log of his trip to Australia he reveals that when he was passing through Malaya on his return flight to England he met a member of the RAF whose officer was called Harpic for the same reason.

From the 1930s until comparatively recently, [Harpic's] slogan was "Cleans round the bend", the bend being the U-shaped trap behind the toilet bowl that prevents the bad air from the drains escaping into the bathroom.

The 1929 date of Sea Slang was of course too early to support either Harpic's slogan or Shute's Round the Bend as the origin of 'round the bend' in the sense of "insane".

Having thus filleted, cooked and eaten the second and third red herrings, I was at a loss until I uncovered an oblique reference to caisson disease, also known as the 'bends', in the 1922 Longman New Universal Dictionary.

3bend n 1 bending or being bent 2 a curved part, … 3 pl[ural] but sing[ular] in constr[uction] CAISSON DISEASE <a case of the ∼s> – round the bend mad, crazy — inf[or]m[a]l <thought his friends must have gone round the bend>

Symptoms of caisson disease, the 'bends', may include acute itching, paralysis, confusion, dizziness, ringing in the ears, and brain damage, among other symptoms that may be in sum or in part mistaken for madness, either by an outside observer or by the sufferer.

The 'bends' were also associated, by uninformed sufferers if not by latter-day doctors and scientists, with the nitrogen narcosis that frequently precedes the disease. Nitrogen narcosis, called "rapture of the deep" by Jacques Cousteau, causes

a host of irrational behaviors. Some divers panic; others, like Mr. Cousteau, feel a drunken sense of invulnerability so overwhelming that some have been known to remove their breathing tube to share the gift of air with a passing fish.

The 'bends', a name first attested by OED from 1894 in the sense of symptoms of caisson disease (or, "more loosely, the whole disease"), took the name from the contortions of limbs and joints characteristic of some afflicted with the disease. Those contortions resembled a pose affected by fashionable people of that time and earlier. The pose was known as the "Grecian Bend" (evidence in print from 1820). 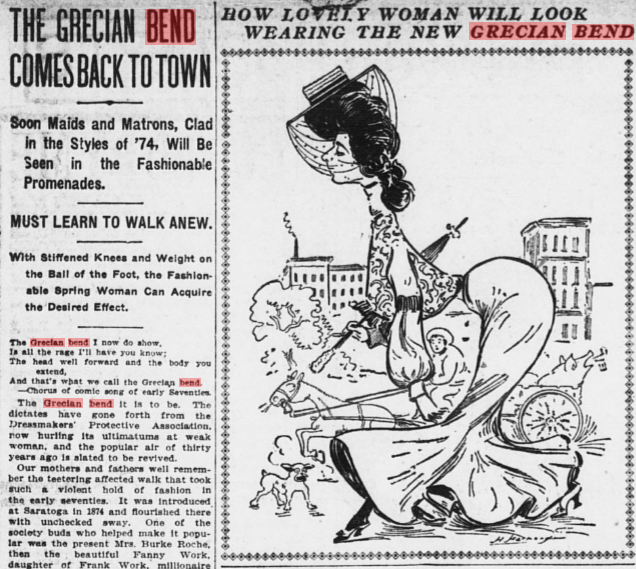 "The first time I heard of 'the bend'," Mr. Lovejoy said, "was while I was employed in the caissons of the St. Louis bridge piers…I have seen a man doubled up as if he had violent cramps, rheumatism, sciatica, and the toothache combined."
"Why is it called 'the bend'?"
"Because some of the workmen thought they distinguished a resemblance between the position of the sufferers and the then favorite attitude of fashionable women known as 'the Grecian bend'."

No smoking gun emerged from my research, as was indeed too much to hope, but 'round the bend' in the sense of lunacy may have originated from the characteristic appearance of some afflicted with symptoms of 'the bends', perhaps also prompted by the nitrogen narcosis typical of being just around the bend from the bends.

Had it not been for those vague, darting silvery shapes, which I never managed to catch much less fillet, which were 'bends' as the nautical term for methods of attaching two lines to each other etc., and 'bends' as another name for the strongest planks in ships' hulls, and 'bends' as locations on rivers, roads and shorelines, I might have made the connection between 'the bends', that is, the symptoms of caisson disease, and the 'around the bend' of madness sooner.

Not the answer you're looking for? Browse other questions tagged etymology phrases expressions phrase-origin or ask your own question.