What do words mean anymore?

One of my math students was recently solving some word problems and gave up on one with the note: "Who knows? What do words mean anymore?"

An amusing comment but also an intriguing syntax. At first I thought my reaction was to anymore being a negative polarity item without much of a negative context, but I think the question syntax licences NPIs (compare "What do words even mean?" and "Do words mean anything?"). Now I think it's just the lack of the negative with which "anymore" tends to be paired.

I wonder, how would you gloss the contribution of "anymore" to this sentence? Has anyone collected more data on this recent use of "anymore" so we can get a fuller picture? 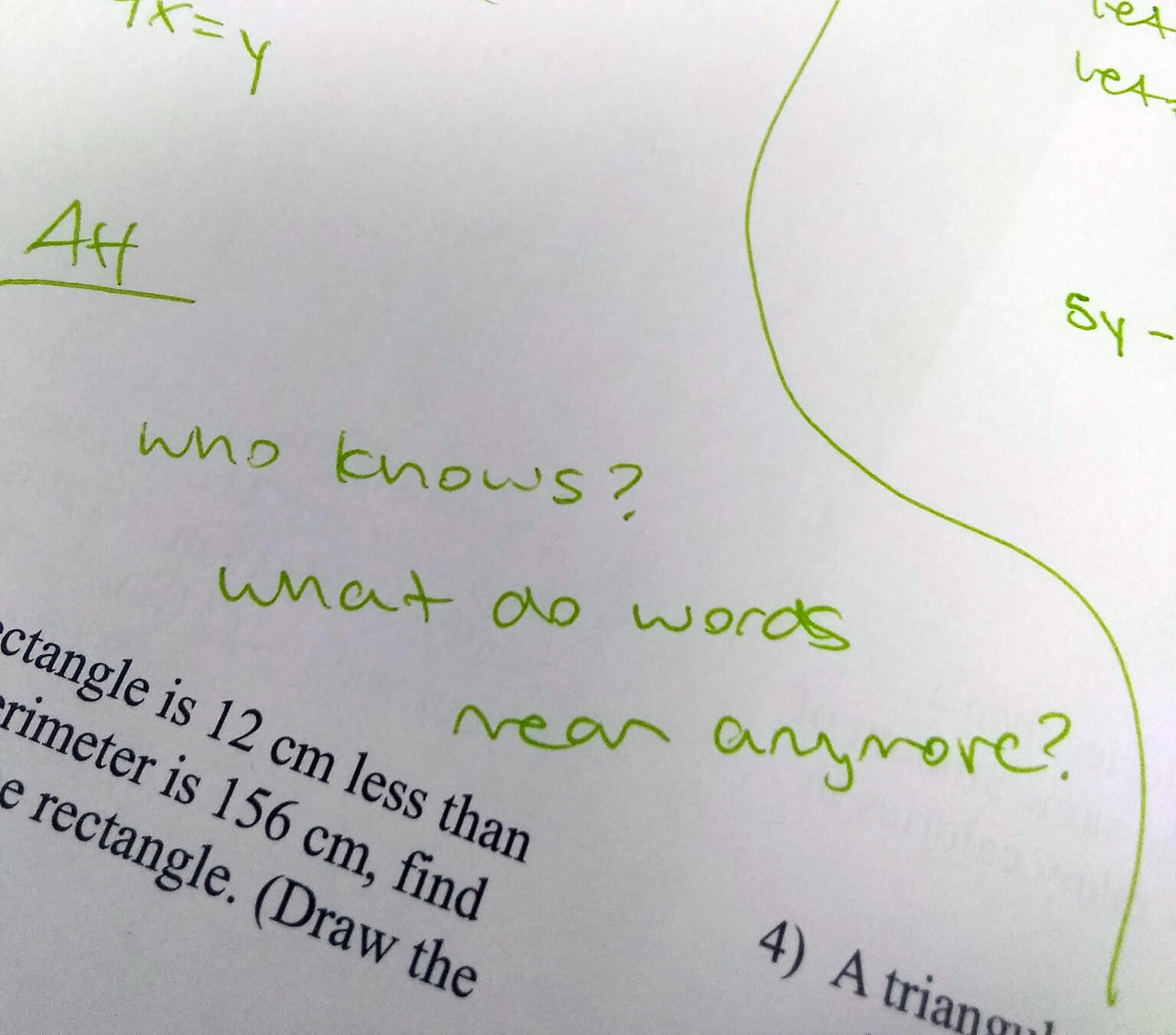 I wonder, how would you gloss the contribution of "anymore" to this sentence?

I would gloss this as "überhaupt noch", since I'm German. That would be the most felicit translation. I wouldn't know how to translate it back, and can only accept this one, following @JLawler's consent. I'm tempted to insert even, but I'm afraid of committing to inflationary use, even.

noch, apparently without cognate in English, tranlates only approximately. Its etymology is from *nu- "now" + *kwe- "and" [en.wiktionary]. Personally I'd consider a relation to near, next, (e)nough, *Hnek'-, too, but that's a different story. [DWDS. de] go out of their way to show that there's not a single correct etymology, though they choose their poison from *nu-, too. Personally, I'd like to elaborate on the parallels from their noch 2 to En. nor, but that's a different story.

überhaupt is a mere intensifier, e.g. "what does that even mean, anyhow", for sake of the argument.

How is that relevant?

any- is commonly etymologized from one + -y. This is meaningful perhaps in do you want anymore, and surely elsewhere, too. Nothing to do with the above, so far.

Has anyone collected more data on this recent use of "anymore" so we can get a fuller picture?

In this particular case I want to argue if the phrase is archaic and inhereted by one of your math students--not made up completely de novo from general rules, though not formally breaking any either, insofar as rules are flexible; I still agree that it sounds remarkably different--specificly taking into consideration @JLawler's "normal NPI that asserts present negative" and the stipulated etymology of the possibly related German phrase in *nu- "now, at present" that a similar semantics might underly this instance of a-ny-more as well. At that, a- is easily identified with Old English ae, German je(h) "ever, each" (cp. uncertain ever, Ger. jedoch "although") in a slight of hand, because neither one has a proper etymology, on account of being ultra short. While je can be occasionally identified with ja "yay", gar "thoroughly", etc. (cf. Grimm for more), it will be remembered that the question particle nu, that is evident in many IE branches, exhibits negative polarity.

Hence I would tentatively transcribe "what do words mean now evermore"? Yet, it should have become evident that this is entirely doubtful.

No, I have not "collected more data". I'm positive that the usual secondary sources won't offer any insight, after anyways is the opposite of widely recognized to contain an archaic prothesis that is not just a jocular plural (as I have previously argued here).

1
Which word to use, “again” or “anymore”?
2
What does “deepest summer” mean?
7
Is the use of the positive “anymore” considered correct?
0
Does anyone use “misconstruct” (instead of “misconstrue”) anymore?
1
What does EOL mean?
0
What does “constant proportionality” mean in simple words?