Was the Shark frightening to 16th / 17th-century English speakers?

Undoubtedly, in our Modern-mind-set, for many the mere utterance of the word "Shark" (more so when in the ocean, swimming) brings a sort of dread or at the least, undesirability to the stomach; even if you are one to think they are quite wonderful, and this widespread fear in them is certainly a more modern phenomenon. Some blame it on Speilberg, others on the 1916 "Jersey man-eater" attacks, but regardless of where this heavy fear in them arose, it is certain there is one, even if it is somewhat irrational.

Now onto my question: I am writing a few short stories which are period-pieces and would like to know if the word "shark" held any dreadful notion to it in 16th and 17th-century England?

1560s, of uncertain origin; apparently the word and the first specimen were brought to London by Capt. John Hawkins's second expedition (landed 1565; see Hakluyt). There is no proper name for it that I knowe, but that sertayne men of Captayne Haukinses doth call it a 'sharke' [handbill advertising an exhibition of the specimen, 1569] The meaning "dishonest person who preys on others," though attested only from 1599 (sharker "artful swindler" in this sense is from 1594), may be the original sense, later transferred to the large, voracious marine fish. If so, it is possibly from German Schorck, a variant of Schurke "scoundrel, villain," agent noun of Middle High German schürgen (German schüren) "to poke, stir."

By the recorded etymology, because the word "sharker" (during the period I am focusing on) meant "dishonest" and "preying" person, and that the very closely sounding German word "Schurke" means "villain", and that an archaic name for "shark" was "sea-dog", "dog" meaning:

by c. 1200 in abuse or contempt as "a mean, worthless fellow, currish, sneaking scoundrel." (OED)

one may thus assume that these English speakers of the period very well might have considered the shark to be a villainous creature or a slimy and wretched monster at that. But this does not give evidence that it was looked upon with any serious "dread".

the fishes called sharks are most ravenous devourers, the shark and in the waters upon the coasts of africa

And in Shakespeare's Macbeth (1623), the weyward sisters in their famous "Double, double toil and trouble" scene say:

"ravin'd" here being a corruption of the word "ravenous" or "rapacious". This is Shakespeare's only mention of the "shark", as an animal. Although he uses "shark'd" in Hamlet.

And according to this Smithoian article:

Finally, in 1569, the word "Sharke" finally finds its place in the English language, popularized by Sir John Hawkins' sailors, who brought home a shark specimen that was exhibited in London that year. Influenced by the violent, and commonly exaggerated, stories circulated by sailors and explorers, general perception pegged sharks as ravenous beasts intent on devouring everything in sight.

This brings one to the certain conclusion that there must have been, at the very least, a circulated notion that the Shark was a ravenous and merciless creature--But once again, although this might slightly infer a sense of "dread" to the creature, it does not explicitly state it.

One of the oldest, recorded, Shark attacks I can find was the attack of one Antony Van Corlaer who in 1642, according to Wikipedia, was:

Unconfirmed, presumed bull shark. The victim (Antony Van Corlaer) was presumably killed and eaten by a shark on a stormy evening while attempting to swim across the Hudson River at the Spuyten Duyvil (Old Dutch, meaning: "Spewing Devil". It was named after this incident), Riverdale, New York City. A witness to Van Corlaer's death stated that "the devil" in the shape of a giant fish swam up and proceeded to "seize the sturdy Antony by the leg and drag him beneath the waves." This may be the earliest recorded shark attack in the New World. 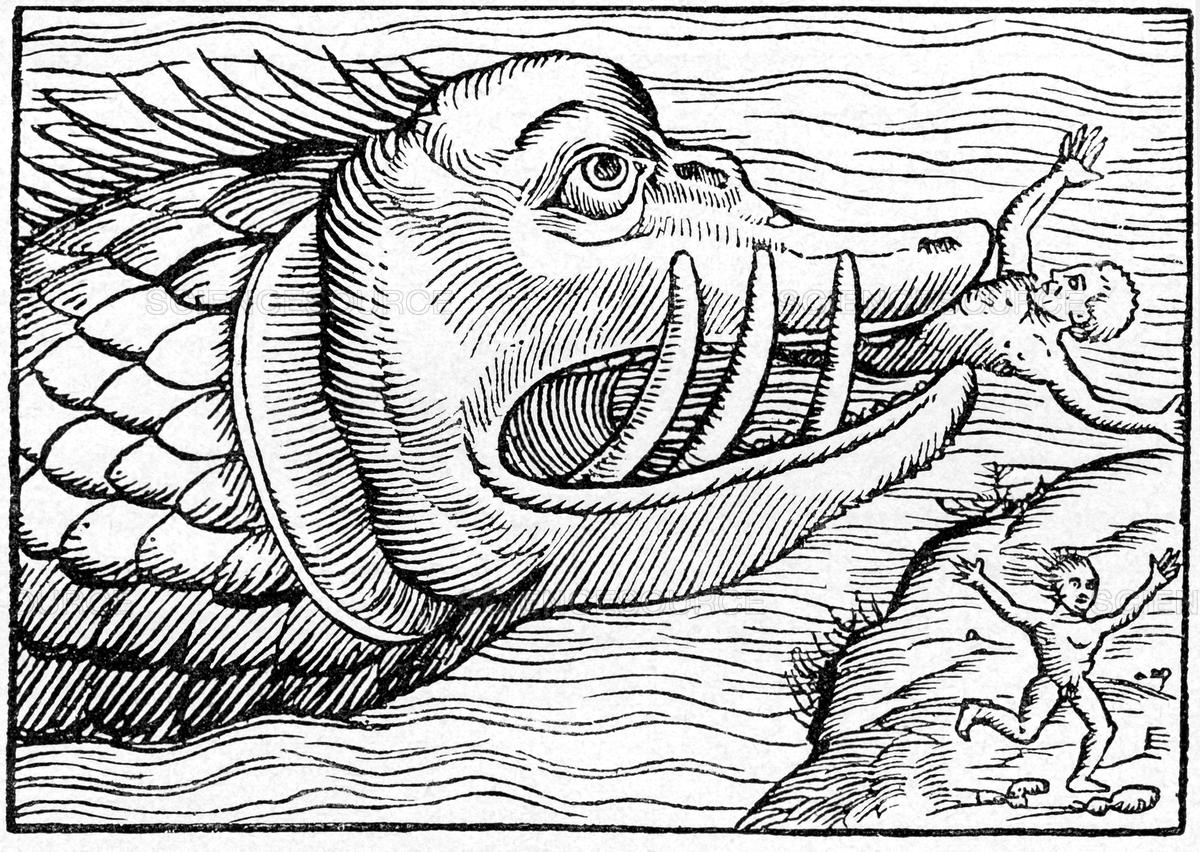 And furthermore, this essay has much substance on the matter, in which I found an even older account of a shark attack (although I am not certain if it was initially written in English):

man fell overboard during a storm, and it was impossible for us to reach him or go to his assistance in any way. So we threw him a block of wood attached to a rope, specially provided for this purpose. Our crew began to bring in the man, who had managed to catch the block, but, when he was no more than half the range of a musket away, there appeared from beneath the surface a big monster known as tiburon; it rushed at the man and cut him to pieces right before our eyes. It was certainly a terrible death."

But after all is looked on, I still am not getting a sense that the shark was truly "dreaded" on a widespread level to English-speakers. Yes, I find it undoubtable that the creature was viewed as ravenous, and even at some accounts, truly devilish, but would there have been any explicit, and large dread to the beast? Perhaps my question is beside the point since inevitably, most people were not going into the ocean for a luxurious swim every day, or for many, ever; but I am still very interested in the subject and thus, I will ask it here. Of course, if anyone could find a 16th-century text that explicitly says the Shark "brings fear to all the hearts" that would surely be the be-all-and-the-end-all. But till then, any insight would be greatly appreciated.

Just for the sake of it: Here is one of the first European depictions of the infamous Great White Shark. By Gessner (mid-16th-century)

I forget the name of the documentary, but there was one about the film Jaws that discussed the cultural impact of the film. One of the things that it mentioned was that, in the 1960s and '70s, deep-sea swimming was rather popular. People would anchor a little dock out in the middle of the ocean, sit on it and jump in. After the film, though, this practice would become less popular for fear of sharks. Deep-Sea swimming was rather popular for a while and even cruise ships (to this day) will drop ladders and anchor for people to go for a dip, but thanks to the film, this is less commonly practised than it was in the past.

I would think that sharks were not something that was considered to be overly feared in that time period given the infrequency of shark attacks even in the modern-day, but there is the factor, too, of general fear and distrust of the sea in general (hence why we see things like 'Here be monsters' on old maps) would make me think that swimming (especially where a shark attack is likely to occur) would be rather rare per se and any attack would be seen as the essay you cited above expressed it: as a dæmon coming from the deep to maim and kill.

Not the answer you're looking for? Browse other questions tagged etymology connotation linguistics early-modern-english research or ask your own question.

4
Etymology of "shark"
3
Have the words 'horsemanshipp' & 'warr' been used so in writing, in the early 16th Century?
9
What is a 17th-century affectionate term for "Mother"?
5
English Typography in the 17th Century
5
"Tommyknockers": why the "tommy" prefix in AmE?
1
Difference between "inspirer" and "inspiration"
12
In the old name Dreadnought, is nought an adverb or a noun?
2
17th century vs modern english grammar
3
Meaning of "Men are decayed, and studies: she is not." (17th century English)
1
What word was used with the meaning of "suicide" pre-1650s?