For ex­am­ple, the com­bi­na­tion [ts] never starts an English word but it can easily end one, as it does in bats, [bæt̚s].

On the other hand, [pl] never ends an English word but it can start one the way it does in play [pʰleɪ̯].

No­tice how if you try to pro­nounce [ts] at the start of a word like tsetse [ˈt̪͡s̪i.t̪͡s̪i], it is rather dif­fi­cult, but at the end of a word like stats [stæt̚s], it is not at all dif­fi­cult. It also seems quite easy in the mid­dle of words like pizza [ˈpʰit̚.sə].

So why is it that cer­tain con­so­nant clus­ters have a ten­dency to oc­cur only at the start of a syl­la­ble but oth­ers only at the end?

The reason why certain clusters don't occur at the start (or end) is because they violate the Phonotactic constraints (the restrictions on the combination of sounds) of English. Phonotactics is a branch of phonology that studies the ways in which phonemes are allowed to combine. It studies the sequences of sounds in a particular language, for example, the sequence /pn-/ is permissible in Greek, but not in English i.e. there's no English word that starts with /pn-/ (that's why the ‘p’ in *pneumonia is silent in English). Each language has its own specific rules that govern the possible phonemes sequences.

Some constraints on English syllable structure are:

There are many more constraints, however.

Now there's a concept of Sonority, which is a relationship between sounds and how they are arranged within syllables. Most linguists define sonority as the relative openness of the vocal tract, which corresponds directly to the relative loudness of a sound.

A sonority hierarchy is a hierarchical ranking of speech sounds. There are many different orders (narrow and broad) but a typical order of sonority values (in descending order) is:

Vowels are the most sonorous sounds whereas plosives are the least sonorous.

The cluster /pl-/ is a permissible onset cluster in English because it doesn't violate the phonotactics of English. If you draw a sonority curve for the word 'plant', you'll see that the sonority increases from the onset to the nucleus and then falls from the nucleus to the coda, it's therefore a well-formed word.

Here's a sonority curve for the word 'plant' I've just made:

See? Sonority rises from the onset to the nucleus and then falls from the nucleus to the coda. It explains why the cluster /pl-/ is permissible.

In this graph, rather than rise, there's a fall and then rise from the onset to the nucleus which violates SSP. Therefore, */lp-/ is not a permissible onset cluster.

The only common cross-linguistic exception to SSP is a cluster of /s/ followed by a plosive. (UPENN)

From An Introduction to English Phonology by April McMahon:

Like many rules, the Sonority Sequencing Generalisation has an exception, and this involves the behaviour of /s/.

It doesn't explain everything about the ordering and possibility of consonant clusters and there are many other exceptions as well.

In the word 'pizza' [ˈpʰit̚.sə], the [t] and [s] belong to different syllables, so [ˈpʰit̚] is one syllable while [sə] is another and it does follow the SSP.

In the word 'stats', the /-ts/ is a permissible cluster (in this case, the Sonority increases rather than decreasing, but note that it's an exception to SSP).

From Introduction to English Phonetics and Phonology by Gut Ulrike:

When words consist of more than one syllable, when they are multisyllabic or polysyllabic, the problem of syllabification arises.
Should the consonants /kstɹ/ in the word extreme /ɪk.stɹiːm/ be analysed as coda consonants of the first syllable, as onset consonants of the second syllable or should they be split up somehow to fill both positions?
Phonologists have proposed that these consonants are distributed according to the maximum onset principle. This principle states that intervocalic consonants are syllabified as the onset of the following syllable as far as the phonotactic constraints of the language allow it. This means that the two syllables of extreme are split up into /ɪk.stɹiːm/ as illustrated in Figure 3.11. /stɹ/ is syllabified as the onset of the second syllable, since this conforms to the phonotactic rules of onset clusters. Iksul violates these rules, so that /k/ has to be syllabified as the coda ofthe first syllable. 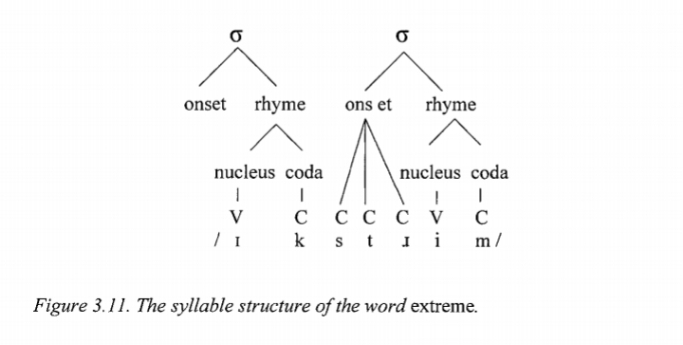 Here's a chart from English Words: A Linguistic Introduction by Heidi Harley which shows permissible biconsonantal codas in American English: 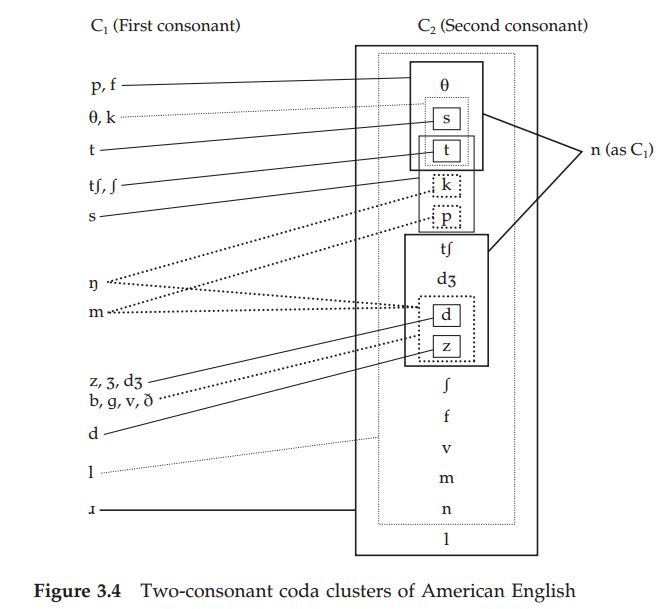 For example "ts" without a preceding vowel only represents a consonant sound which exists in other languages such as Russian and some African languages ('tsar' and 'tsetse fly'). It does not represent an English sound at all even though tsar and tsetse are understood in English.

Similarly "pl" does not represent an English sound without a following vowel. If you try to pronounce it you will add a vowel to the end, even if it's the part time vowel 'y' (think "ply"). It may, like "ts" represent a consonant in some other languages but it doesn't in English.

No specific answer from me but here is some quantitative information I have contrived from the "Mathematica" dictionary of 90,000+ words. It may help to sharpen sharper linguistic minds.

I have only considered clusters that occur more than five or more times in the dictionary. The most common starting consonant clusters (with their number of occurrences) are:

The most common ending clusters (with their number of occurrences) are: 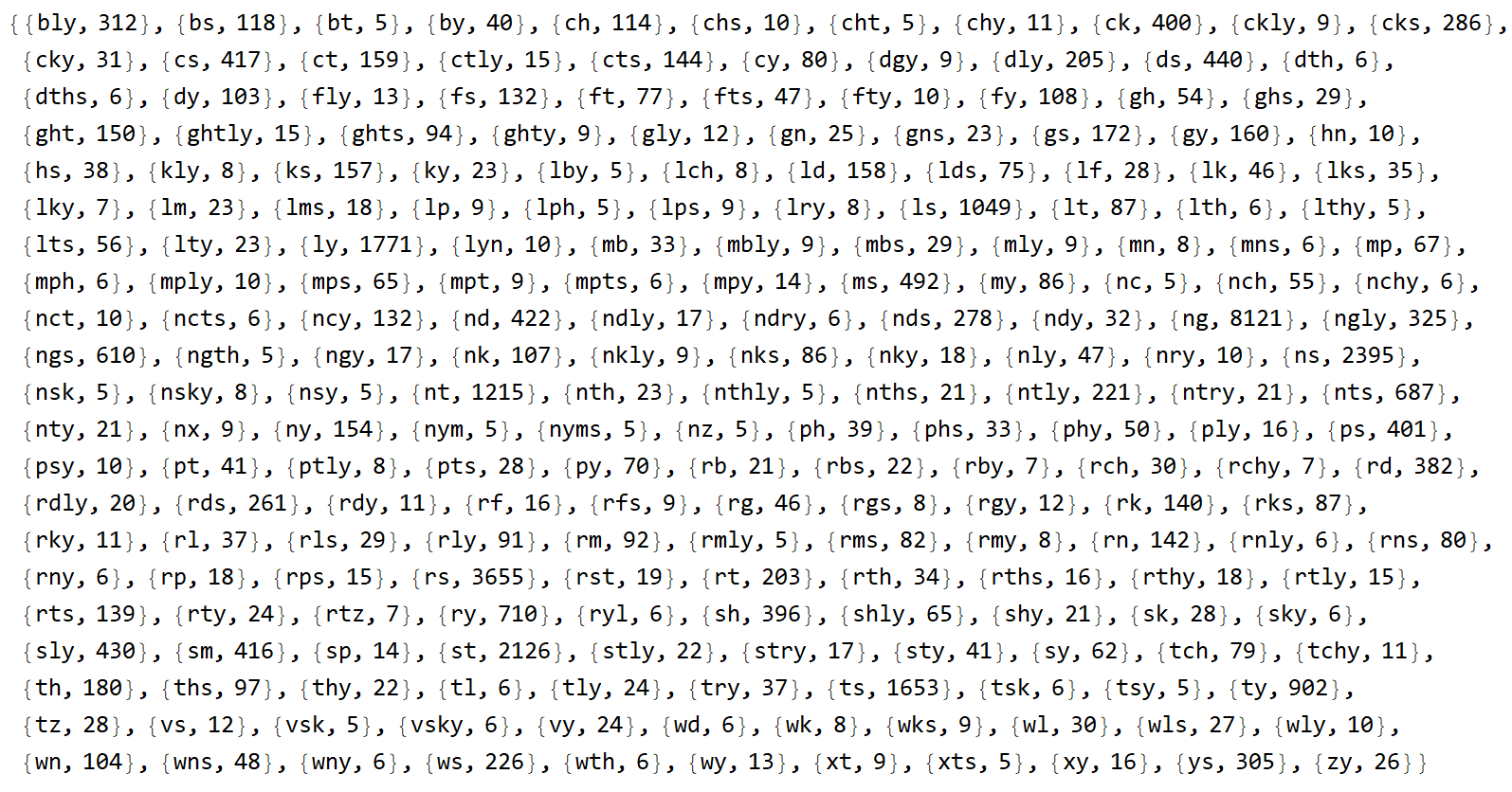 and the only clusters common to ends and starts are these: 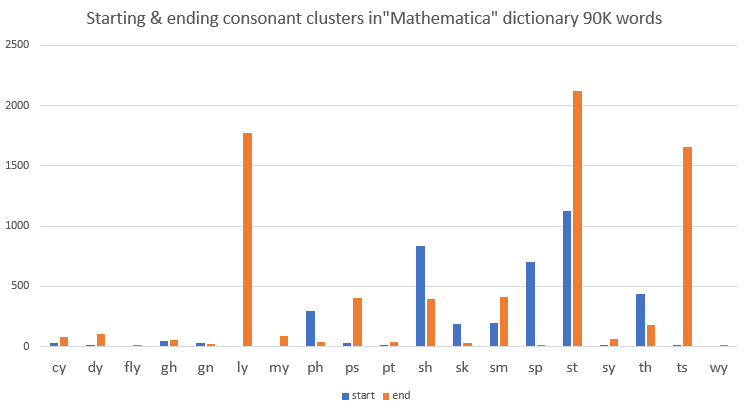 The two only things I notice are: the questioner's assertion about "ts" is supported; and that "...ly" is a common ending, presumably derived from North European suffixes based on ...like, ...lich, ...lig and many similar roots.

23
Why did the F of "sneeze" and "snore" change to an S in English history?
7
How to syllabify "obsessive": OB-SE-SIV or OB-SES-IV?
3
Pronunciation of 'damning' with /n/
2
Where did "nightingale" get its second N from?

4
How to calculate number of syllables in a word using only the IPA (International Phonetic Alphabet) spelling?
2
Can the word "something" really not be broken up into any pieces (hyphenation) in British English?
1
Does English allow alveolar flap [ɾ] at the ends of syllables? If yes, how to syllabify?
1
Does English allow /eɪʃ/ in the end of a syllable (in the same syllable)?
0
Why are there so many restrictions on /ŋ/ in English?
2
Rule of English phonology that prevents /j/ and /w/ from occurring in the ends of syllables
1
Are /t, p, k/ aspirated when they are at the start of a syllable after another syllable that ends in /s/?