Which phrase attributed to the “cat-o'-nine tails” is the most credible?

In one of many online articles professing the origin of well-known and popular English sayings, I was particularly struck by the one related to "Cat got your tongue". The author writes

Origin: The English Navy used to use a whip made with multiple rope endings called a ‘cat’o’-nine-tails’. After whipping a victim, they’d joke “cat got your tongue?” Others believe the expression comes from the Ancient Egyptian method of cutting out the tongues of blasphemers and serving them to cats for dinner.

Despite the article being only posted earlier today (October 1, 2020), the story didn't ring true to my ears. In fact, a simple Google search revealed the following

The expression [cat got your tongue] sounds as though it might be old but isn't especially so. I can find no instances of it in print until the mid 19th century, as in this example from the Wisconsin newspaper The Racine Democrat, December 1859 […]
The early examples of the expression in print all come from the USA, which reinforces the falsity of the Egyptian or Royal Navy origins.

The Science Museum Group website states that the 18th century weapon used to punish sailors is in fact the origin of the equally popular sayings, “Not enough room to swing a cat” and “Letting the cat out of the bag”; the latter referring to the bag in which the whip was kept.

Wikipedia claims the custom of treating cuts and lacerations with brine, caused by the flogging instrument, created the following phrase

After the flogging was completed, the sailor's lacerated back was frequently rinsed with brine or seawater, which was thought to serve as a crude antiseptic (although it is now known that seawater contains significant microbial components). Although the purpose was to control infection, it caused the sailor to endure additional pain, and gave rise to the expression "rubbing salt into his wounds"

World Wide Words' post argues that the saying “no room to swing a cat" was already familiar to the English well before the whipping instrument was first documented in literature.

It’s clear that even by 1665 the expression was idiomatic. This makes it very unlikely that it should derive from cat-o’nine-tails, since the first mention of that term for the punishment device is in William Congreve’s play Love for Love of 1695.

However, the following three sources: 1, 2 and 3 all attribute the origin of “cat got your tongue" with the infamous instrument of punishment. There is also an article that says the nine ‘tails’ represent the nine lives of a cat.

It seems clear that the cat-'o-nine-tails, which was made with nine log lines (the knots in the rope helped sailors to measure a ship's speed) is credited to have created numerous English phrases and expressions but not one of the reference actually confirms with certainty that it is the source of any of the phrases listed above.

When was Cat-o-Nine-Tails first used?

The earliest instance for a proximity search of cat, nine, and tails in Early English Books Online is in The English rogue described, in the life of Meriton Latroon, a witty extravagant by Richard Head, published in 1668.

The last [dream] was of the Cat of Nine Tails, which my Master laid so home me thought that the smart thereof made me cry out, and so I awaked; (p.33-34)

Not enough room to swing a cat

I found two earlier references to this expression.

The first is in The Lawes Resolution of Womens Rights by Thomas Edgar from 1632. Edgar describes a situation where a woman might be given the equivalent of a third part of her husband's chief house, and how that might not be a lot of room:

But how if the Common and all things bee so inclosed that there is not roome to swing a Cat in, women are not put in Rogum [the grave] with their Husbands any where but in the Indies [...]

The second instance is in the satire The first part of the last wil & testament of Philip, Earle of Pembrooke and Montgomery, Lord of Saint Quintin, &c., now Knight of Berk-shire from 1649. The main character is a fool giving his will and rambling on, which makes for a lot of wordplay:

I'de ra∣ther go to hel, or purgatory, where there's room enough for a coach and six horses to turn, then be mew'd up under ground, where a man cannot swing and [sic] Cat ; but prethee hold thy tongue, and let's mind our businesse, for I shan't die in quiet, til I see my dogs provided for.

In both usages, I can't parse whether they mean a feline cat or some kind of stick. That could be part of the joke. I certainly see no evidence of a naval inspiration for this statement in either example.

In cat-o'-nine-tails, the cat was a stick and the nine tails referred to the nine lashes that were attached to it: 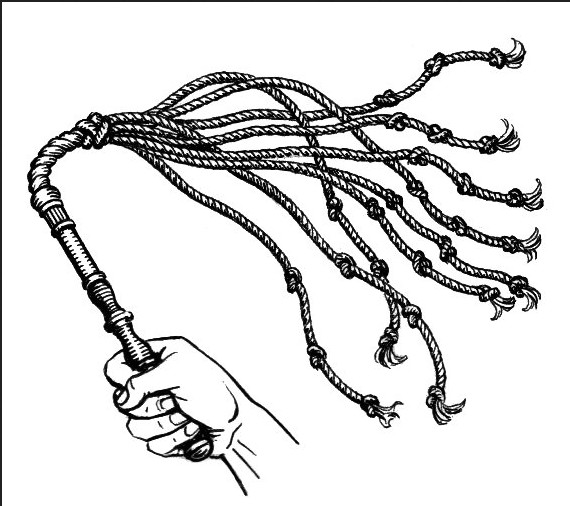 1636 Divine Trag. lately Acted 23 Sundry youths playing at Catt on the Lords day, two of them fell out, and the one hitting the other under the eare with his catt, he therwith fell downe for dead.

And to explain "playing at Catt"

https://www.britannica.com/topic/tip-cat Tip-cat, also called One-a-cat, outdoor game dating back at least to the 17th century and introduced to North America and elsewhere by English colonists. The game was widely popular in 19th-century Great Britain and in early 20th-century North America.

1. A whip with nine knotted lashes; till 1881 an authorized instrument of punishment in the British navy and army.

1695 W. Congreve Love for Love iii. i. 44 If you shou'd give such Language at Sea, you'd have a Cat o' Nine-tails laid cross your Shoulders.

It is clear from Congreve’s use that he and his readers/audience were familiar with the instrument. We can conclude that the name was used earlier, and indeed we have:

“Not enough room to swing a cat”

7. a. transitive. To cause to oscillate, as a body suspended from a support above; to move or sway (something) to and fro in this or a similar manner. to swing a cat (i.e. holding it by the tail); in no room to swing a cat in and similar expressions, said of a confined or narrow space. to swing the lead.

1665 Medela Pestil. 57 They had not space enough (according to the vulgar saying) to swing a Cat in.

I think the OED’s idea of swinging an actual cat to and fro is a little fanciful, and “cat” was, in fact a cat-stick, or any stick and to swing would mean to whirl about or wield a stick.

“Letting the cat out of the bag” There is no reason at all why a cat-o'-nine-tails should be kept in a bag – what would be the reason?

"It is reported that the lashes were sometimes stored in bags, but the suggested nautical punishment origin fails at the critical point, in that it doesn't match the 'disclose a secret' meaning of the phrase."

Also - who reported it, and when and why is not mentioned: if it was to support the "cat out of the bag" theory then it should not be trusted.

More helpfully, it goes on to add

Of the two explanations, the 'pig in a poke' derivation is the more plausible, although I can find no direct documentary evidence to link 'letting the cat out of the bag' to the selling of livestock. Versions of the phrase exist in both Dutch - 'Een kat in de zak kopen' and in German - 'Die Katze im Sack kaufen'. These both translate loosely as 'to buy a cat in a bag', that is, to buy false goods.]

Thus the following may not be reliable

This is more prosaic. I don’t know whether you have ever tried to put a cat into a bag, but it is not an easy job as the cat resists, and once out, it runs off at high speed. Thus the secret figuratively escapes and cannot be brought back.

That's interesting, but I thought the phrase "not enough room to swing a cat" came from the English folk game Dog and Cat, a pre-1600 game that led to the later development of Cricket and Baseball. The object of Dog and Cat was for one player to try to get a stick or a chunk of wood (the cat) into a hole that was defended by another player, also with a stick (the dog.)

Not the answer you're looking for? Browse other questions tagged phrase-origin popular-refrains nautical-terms or ask your own question.

8
What type of cat do you swing?
2
The Cat Out of The Bag

16
"The whole nine yards"
12
History of the phrase "break wind"
8
What is the origin of "A cat in hell's chance"
0
An idiom for "going with the most likely option"
2
Source for the Adage: "The first liar is always believed most."
2
Origin of the 'Three Rules of Work', popularly attributed to Einstein
6
Origins of the phrase 'titty flo'
0
Origin of the phrase 'redress the balance'
2
If there is honey, the bees will come from nine mountains away