I am aware of the fundamental history of the etymology of the word "America" in regards to the land it represents: how Leif Eriksson first-named the Brave New World Vinland, and afterward Columbus and the rest of Spain mistakenly regarded it as part of India, and then finally how Waldseemüller coined it in favor of homaging the voyages of Italian explorer Americus (Latinized variant of Amerigo Vespucci), and that it is well-believed the first occurrence of the word "America" in reference to the country, in print (a woodcut printing) is found on Waldseemüller's map from 1507, which introduced to Europe the concept of the Brave New World as being considered a separate continent, with Waldseemüller's illustrious words imprinted onto the map:

But where my interest really sparks in is the first mention/use of the word "America" in regards to the country in the English language specifically. I certainly understand revealing the very first usage of the word, or any word for that matter, in an English-written/translated book/map, etc., is improbable, unless the word is so distinct as to be able to dissect the exact coinage, and even then there may be numerous sources where the word is used "earliest", and furthermore since the word "America" was not invented by an English-speaker, nor was imprinted into English until, surely, some notable time after its birth, but nevertheless I will try my luck here and see what happens.

Any insight on the topic would be exceedingly appreciated.

P.S. Since I am already on the subject of the word "America" in early print, and if you clicked onto my question one could safely assume you have some at least interest in the subject, I thought this would be appreciated to many: Master William Shakespeare makes reference to America numerous times (it is believed The Tempest makes reference to Bermuda) but more distinguishly, in the Comedy of Errors the character Antipholus of Syracuse says:

Picture cut from a facsimile of the First Folio (1623)

This sayde north parte is callyd Europa,
And this south parte callyd Affrica,
This eest parte is callyd Ynde,
But this newe landys founde lately
Ben callyd America by cause only
Americus dyd furst them fynde.

I used english-corpora.org to search the EEBO corpus, which only contains books, so it’s possible that there are earlier examples out there.

It was first printed in Waldseemüller map in 1507.

The Waldseemüller map or Universalis Cosmographia ("Universal Cosmography") is a printed wall map of the world by German cartographer Martin Waldseemüller, originally published in April 1507. It is known as the first map to use the name "America".
The name America is placed on what is now called South America on the main map. As explained in Cosmographiae Introductio, the name was bestowed in honor of the Italian Amerigo Vespucci. 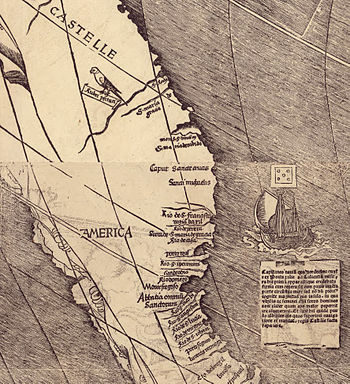 Also from Library of Congress Blog:

While the colonies may have established it, “America” was given a name long before. America is named after Amerigo Vespucci, the Italian explorer who set forth the then revolutionary concept that the lands that Christopher Columbus sailed to in 1492 were part of a separate continent. A map created in 1507 by Martin Waldseemüller was the first to depict this new continent with the name “America,” a Latinized version of “Amerigo.” 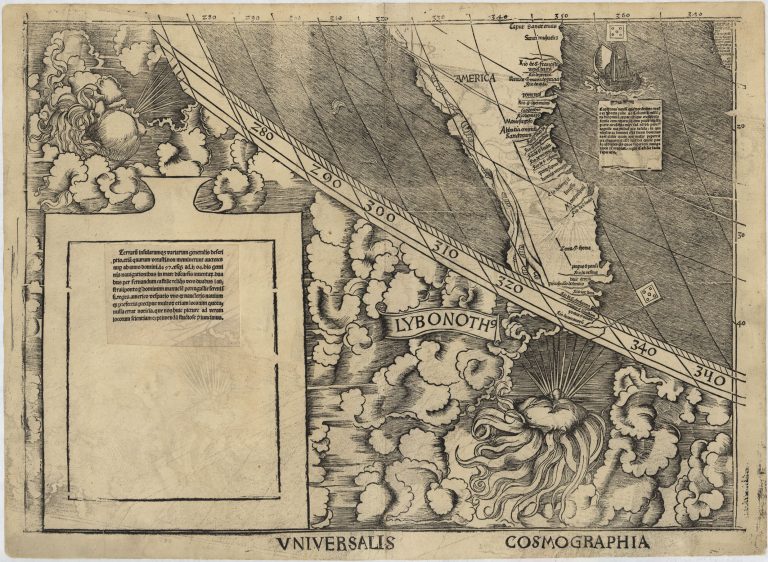 “America” is identified in the top portion of this segment of the 1507 Waldseemüller map. Geography and Map Division.

The earliest use of the word 'America' is present in Laurel's answer (circa 1520), but I'll add some additional quotations:

America, a countrey late founde in the weste parte of the worlde, by Americus Vesputi∣us the yere of our lorde a thousand foure hū∣dred .lxxvii.


The prouince cauled Peru, was also named no∣ua Cathilia by them that fyrste founde it. This region is the west parte of America: and is situ∣ate in the longitude of .290. degrees, procea∣dynge from the West to the East. And south∣warde begynneth fiue degrees beyonde the E∣quinoctial


in deede it is of it selfe with the rest of America, in lyke ma∣ner as Europe, Affryk, & Asia, be one continent or maigne lande vnited togeather. In the fyrst and seconde chapters of this De∣cade,

Ocean, is the cape or poynt cau¦led Cabouerde or Caput viride (that is) the greene cape,* to the wh•¦che the P•rtugales fyrst directe theyr course when they sayle to America or the lande of Brasile.

[The decades of the newe worlde or west India conteynyng the nauigations]......
Wrytten in the Latine tounge by Peter Martyr of Angleria, and translated into Englysshe by Rycharde Eden.
Anghiera, Pietro Martire d', 1457-1526., Eden, Richard, 1521?-1576.
Londini: In ædibus Guilhelmi Powell [for Edwarde Sutton], Anno. 1555.

Beginning in the 17th century, America was used metaphorically by English writers to refer to a place in which one longs to reach.

But there may be earlier claims.

Not the answer you're looking for? Browse other questions tagged etymology history early-modern-english toponyms or ask your own question.

13
What is the first recorded appearance of the mistranslation "Red Square"?
4
First known occurrence of the word "technique" in English
1
First printed use of the word "diagram" in English
5
In what context did the noun 'countdown' first emerge, and when did the word first appear in print?
8
Who originated "Merry Christmas"?
10
What is the 1896 source for the origin of "dyke"?
7
How do language researchers find the first written mention of a word?
11
What is the earliest written example of Old English?
2
Who coined "the eye of heaven"?