I am translating the 1509, first English Translation of Sebastian Brant's The Shyp of foyls (The Ship of Fools), and came across two words which, for the life of me, I could not construe or make legible. The following are the two words, as they are spelled, in excruciatingly archaic fashion, in the text:

vtylyte I think I am willing to accept "utility" as the answer for this one--Thank you!

I think the second word (vtylyte) may be vitality, but after consulting my handy-dandy etymology dictionary, I discovered, much to my dismay, the word vitality is from the 1590s, although the word vital in its "essential to life" connotation dates back to the late 15th century. I also thought the first word (putueaunce) might be petulance, but then again, the word's etymolgoy origin traces it back to at earliest the 1550s, "from French pétulance (early 16c.)" So no luck there.

Any help on cracking down these two archaic words would be lovely. I have attached scans of the two words as they appear directly from the 1509 text.

These fools of their minds are so blind,
That naught they save to their own vitality,
On wise provision they set no thing their mind.

I count him wise that thus doth set his brain,
And in the summer can make such (putueaunce?)
Whereby all his may have their sustenance.

These texts are from Middle English and most of the letters are composed of ııııııııııs.

In Middle English, several letters such as u ~ v, i, w, m, n etc., were written using a sequence of a particular short downstroke of the pen/quill, called a minim. A dotless i was a single minim:

So the word 'minim' itself would've been written:

It would be ten undifferentiated minims and would've been extremely confusing.

The first word in the question that looks like 'putueaunce' is purueaunce, which was a variant spelling for purveyance. There were identical minims for u and v, so they've been used interchangeably.

A Concise Dictionary of Middle English (Gutenberg) confirms purveaunce and also lists some other variants including purveyaunce, purveiance and purueance.


Or it could be porveaunce which was the Anglo-Norman spelling for purveyance (as pointed out by Andrew Leach and Greybeard in the comments beneath the question).

According to The Language of Emare - A Middle English Romance:


Here's a quote from Sebastian Brant's The Ship of Fools (vol.2) where purueaunce can be found:

The first letter in the second word is therefore a v.

Furthermore, Middle English scribes adopted a practice of replacing an i with a y. Take for example the word mine, it was min in Middle English, so it would've been written ıııııı and would've been indistinguishable from other combinations of relevant letters such as win, nim, nun etc. It was therefore replaced by a y (e.g. myn for 'mine').

The National Archive concurs that y was used for i, and u and v were interchangeable:

Several minims can make up a single letter, or even a group of letters. In particular, minims are usually used for the following letters:
One minim: "i", "j"
Two minims: "n", "u", "v"
Three minims: "m", "w"

There are many citations for utility/utilité/vtylyte in the Middle English Compendium. Some of the spelling variants they've used for utility are vtylyte, vtilite, utilite etc.

Merriam Webster confirms the spelling of utility with an e:

Middle English utilite, from Anglo-French utilité, from Latin utilitat, utilitas, from utilis useful, from uti to use


Here's a quote from Sebastian Brant's The Ship of Fools (vol. 2) where utility is indeed written as vtylyte:

P.S. I thought I would post my full translation of the page you all helped me with, as a small token of gratitude. Enjoy!

Among our fools I number him for one /Which lies idly and in slowthfulness /Making in the Summer no provision /To avoid the Winter’s pain and cold hardness, /What man will not curse and dispraise his madness /Which at no time will for him self provide /Of sustenance in need him self to guide.

He that begineth without advisement /Can not provide that thing that is to come, /Nor scantly that which must be done present /Thus are his deeds done all without wisdom /Of this company yet find I other some /Which naught will save them self to find with all, /But all out wasteth by Riot prodigal

These fools of their minds are so blind, /That naught they save to their own utility, /On wise provision they set no thing their mind /But if they be driven by extreme necessity, /As hunger, thirst, cold or other adversity /So oft when such at vexed with most need /They would provide but than they can not speed

A sole of property that is negligent /For thing to come provideth nothing at all, /But on one day seteth all his intent /So in that space if any need do fall /To him, he shall upon his neighbor call /For help and secure and sore to him complain /And ask release which he shall not obtain

When such fools have their wombs full /They force no more nor take no farther thought /Their vain minds to farther things is dull /Save on that which from hand to mouth is brought /But he is wise and of reason wanteth naught /Which here him guideth by virtue and wisdom, /And so provideth for the time to come

Whereby his wife, his children and offspring /May without care other busyness or pain /With honesty have their fode and their lineage
/Without occasion their good name to distain /I count him wise that thus doth set his brain, /And in the summer can make such porveaunce(purveyance) /Whereby all his may have their sustenance

And in Winter and the hardest of the year /But him I count much folly he and unwise /And void of reason which maketh still good cheer, /And by no mere will the time to come advise /But fools follow most commonly this guise /To sleep all Summer when the season is most clear /And labour in the hardest season of the year

Such no thing labour nor to no work intend /But to idleness a vice ill and damnable /That which is gotten unwisely thus they spend, /So that when Winter comes they are not able /To have one lofe of bread upon their table /Nor other thing their hunger to assuage /An idol man is worthy such wage 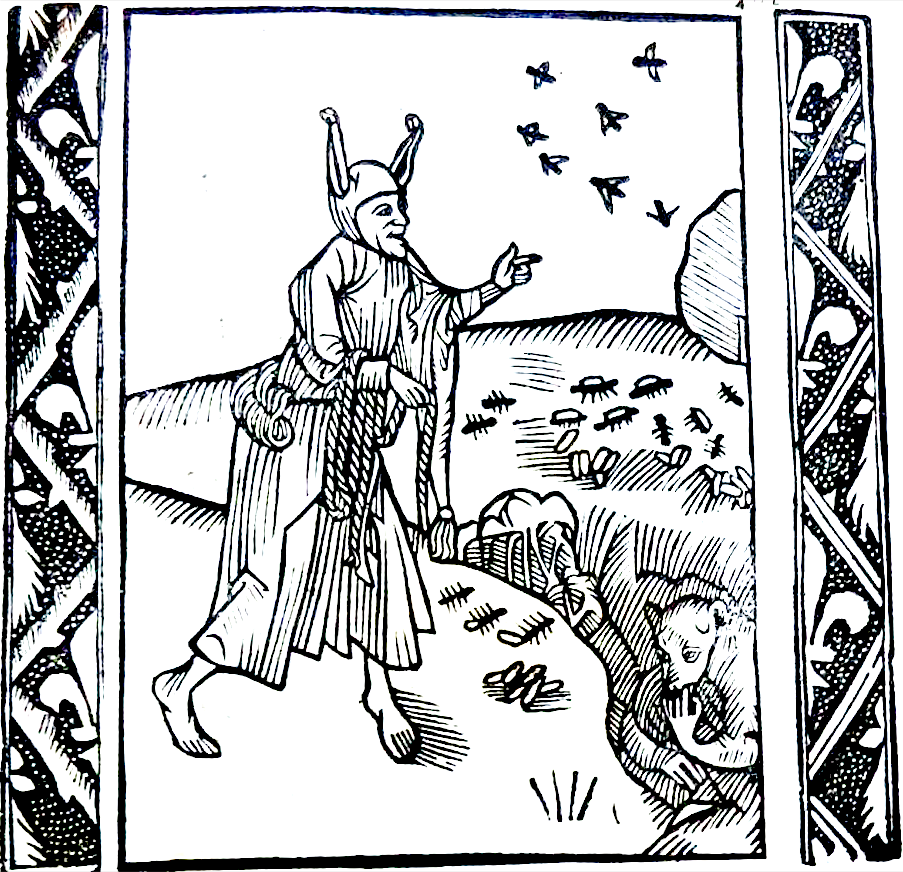 Not the answer you're looking for? Browse other questions tagged etymology archaicisms early-modern-english middle-english research or ask your own question.

39
Reason for different pronunciations of "lieutenant"
17
Why was 'Jesus' spelt 'Jhesus' in Wycliffe's Bible?

18
When should I use archaic and obsolete words?
10
Beggars on Horseback
0
Archaic gradation words/constructs synonymous to "more" and "less"?
0
Are these two meanings of "phenomenal" related?
38
Why "Giraffe" as a name for the animal?
5
Did Shakespeare really coin "Alligator"?
6
Was the Shark frightening to 16th / 17th-century English speakers?