Googling thro' little information about origin of usage of phrase "fruit-loop"(supposedly means crazy person) mostly leads to the dead end. Because, even if the individual words "fruity" or "loopy" does mean crazy/deranged person, it doesn't make sense, why the need/urge to combine those words like that and not just work with the individual counterparts.

And, if it seems to be originated from previously popular breakfast cereal "Froot-Loop" and mispelled when using, then it raises this question with same curiosity: "Why that breakfast cereal is defamed in calling any person crazy ?", I mean "what did that poor cereal do to anyone ?"

Can anyone clarify in details and thus provide closure to this ?

According to MacMillan Dictionary Blog, the word fruit-loop is extremely infrequent. There are only nineteen citations in the MacMillan corpus. According to their blog, some citations are rude. Here are a few citations:

The corpus citations bear out the meaning that is suggested by the context of the reader’s quotation. However, unlike the other examples I have found, the writer seems to be using it as an adjective: I presume that she means that the law seems crazy, senseless, unreasonable. The book is about Shakespeare’s Measure for Measure and the law referred to is presumably the one by which Claudio is sentenced to death for making his girlfriend pregnant. I’m not familiar with Debora Shuger’s work, though I may now seek it out. The fact that she uses such an informal term in a work of literary criticism suggests that her books may be a good read.

Interestingly enough, I could have guessed the meaning of this word not only from the context but also from two other rather similar words. One is fruitcake, which is used to refer to a crazy person; the other is loopy, which means crazy.

Now why is a crazy person called a fruitcake?
This question has been answered by Sven Yargs on ELU.

The answer may be connected to the expression "nutty as a fruitcake."

Christine Ammer, The American Heritage Dictionary of Idioms, second edition (2013) has this entry for that expression:

Perhaps from fruity and loopy, possibly influenced by the Froot Loops brand of breakfast cereal.

So I guess fruit-loop comes from fruitcake and loopy, both of them mean crazy.

According to Google Ngram Viewer, it was first recorded in 1960s. 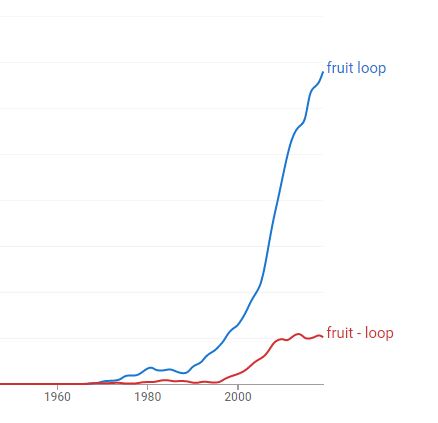 Also note that fruit can be a disparaging word for gay people in Britain.

As per Green's Dictionary of slang, fruit loop has also been used to mean a homosexual man or woman in 1989.

"fruit" was a derogatory word for gay people in the US as well when I was growing up in 1970s California. It is also very suggestive that the "Froot Loops" cereal was introduced in 1963. My New York born stepfather at the time referred to people as "fruit loops" and "fruit cakes" interchangeably, and also referred to the state of California affectionately as "the land of fruits and nuts". I always took that as "fruit" == gay and "nuts" == crazy.

It's also possible that with the advent of Froot Loops, people used fruitcake and froot loop interchangeably to refer to gay or crazy people and froot loop got that meaning.

There is a history of mental health behind breakfast cereals, to address the second part of the question.

Kellogg's cereals were designed as a dietary treatment in mental health therapy used at Battle Creek Sanitarium by the Kellogg brothers. As much of a retreat as a mental hospital for some, patients were given experimental plant-based diets. Corn flakes cereal was the Kellogg brothers' big (accidental) invention and the proposed cure for various forms of insanity and "aberrant" behavior as early as the late 1880s.

Historically, Kelloggs cereals started as food for crazy people, if you will, so why not run with it?

Not the answer you're looking for? Browse other questions tagged etymology meaning-in-context history phrase-origin or ask your own question.

3
Why is a strange person called a fruitcake?