Why are “bath” and “bathe” pronounced differently?

I'm specifically talking about British English. In British English, "bath" (noun) has a long vowel ([ɑː]) while the verb "bathe" has a diphthong ([eɪ]) and sounds more like the American version of "bath".

However it doesn't say anything about why "bath" has a long a vowel /bɑːθ/ and "bathe" has a vowel like American "bath" /beɪð/. Googling didn't help much. I also read different articles (like grammarly) but to no avail.

There is also a question in this platform but that does not explain this difference: "to bath" vs "to bathe"

Does anyone know the reason they are pronounced differently?

EDIT after the two answers:

I did not know the symbols that are used to represent the vowel sounds so I confused them.

I should not have compared the vowels in American "bath" and British "bathe". Also pointed out by the commenters.

I don't know what happened to these words in Old and Middle English but I'm going to apply some general pronuncation rules (Modern English).

The pronuncation of 'bath' was originally /bæθ/ in the South but due to a split known as trap bath split, the short vowel [æ] shifted to the long vowel [ɑː] before some consonants (/θ/, /sk/, /st/, /ft/ etc).

According to Pronunciation Studio:

The split is found in many very common words like: GLASS, CAST, ENHANCE and PATH. It only happens in words that are spelt with an ‘a’ which appears before one of the following consonant sounds or clusters:

The split appeared in southern English pronunciation in the mid-17th century and it’s not clear why it affected some words and not others, though there is a clear tendency for it to appear in shorter and more commonly used words.

When we add the silent e to a word, it usually changes the vowel in a word to a diphthong or a long vowel.

The /æ/ vowel seems to have a special relationship with /eɪ/.

This relationship can also be seen in words like profane and profanity.

The silent e often indicates a long vowel or a diphthong.

So the pronunciation of 'bath' was /bæθ/ and the silent e at the end of 'bathe' indicates that it has either a long vowel or a diphthong.

The Wikipedia article on silent e has also mentioned it:

Digraphs are sometimes treated as single letters for purposes of this rule:

The trap bath split did not affect 'bathe' so its pronuncation remained unaffected (i.e. /beɪð/).

It's worth noting that the vowel in 'bathe' is not the vowel in American English 'bath' as pointed out by Peter Shor in his comment.

The [ð] in 'bathe' is because of intervocalic fricative voicing.

bathe: the a was lengthened in Middle English, which results in the Modern English "face" vowel [eɪ]

“Bathe” is pronounced with [eɪ] (which is not the sound in the American version of "bath") because [eɪ] is what a Middle English long [aː] sound turned into. The vowel in the verb bathe was lengthened during the Middle English period because the verb originally had a vowel after the ”th” consonant sound: when this vowel sound was lost (or before it was lost), it caused lengthening of the [a] in the preceding syllable. The same kind of vowel alternation shows up in the noun/verb pairs grass/graze and glass/glaze (also in some other word pairs such as brass/brazen and staff/staves).

bath: short vowel in Middle English, lengthened during the Modern English period, in only some dialects

In some American English accents, "ath" words like "bath" instead show a lengthened or "tense" vowel with a front quality, which is realized phonetically in a variety of ways (e.g. [æə̯] or [eə̯]). But however it's pronounced, I have not heard of American English speakers merging the vowel in bath with the face vowel (which is [eɪ] or [e]).

You only asked about the difference between the vowels, but here is an overview of the entire history of other differences between the words.

Between PG and OE, the sound changes of "Anglo-Frisian brightening" and "A-restoration" applied, creating the difference in Old English between æ in bæþ and a in baþian. Although marked in writing, the distinction between short æ and short a in Old English was barely contrastive and was lost in Middle English. (The Old English long vowels ǣ and ā, on the other hand, had a stronger contrast that did endure in later forms of the language.) The quoted Etymonline entry is wrong: i-mutation did not apply to either of these words. Even though baþian has an i, the i in the Class II weak verb suffix -ian did not cause i-mutation; this may be because it came from the Proto-Germanic suffix -ōną which had no *i. Fricative sounds like þ had "allophonic voicing" in Old English: at the end of a word, þ was pronounced [θ], while in the middle of a word between vowels, þ was pronounced [ð].

Between OE and Early Middle English, the vowel merger mentioned above turned the vowel in both words into short [a]. Vowel reduction caused the infinitive ending -ian to eventually become something like [ən]; word-final [n] could also be lost in this context, leaving only a schwa [ə]. Word-final schwa in Middle English was written with the letter "e", so Middle English forms like [baðə] (and others like it) are what's behind the "silent e" spelling pattern of "bathe". (I wrote a more detailed answer about "silent e" spellings here.)

During the Middle English period, final schwa sounds came to be lost, but not before causing a preceding short [a], [e] or [o] sound to lengthen to [aː], [ɛː] or [ɔː] respectively. (Lengthening of [i] and [u] happened only sometimes: the modern English "silent e" spelling patterns for the letters "i" and "u" have more complicated origins.) So by the Late Middle English period, bathe might be pronounced [baːð]. By this point, the distinction between [θ] and [ð] would be considered phonemic rather than allophonic as both sounds could occur in the same environment (at the end of a word). The loss of word-final schwa created a number of other pairs of words with alternations between voiced and voiceless word-final fricatives.

In fact, it does:

"bathe (v.) Old English baþian "to wash, lave, place in a bath, take a bath" (transitive and intransitive), from root of bath (q.v.), with different vowel sound due to i-mutation. 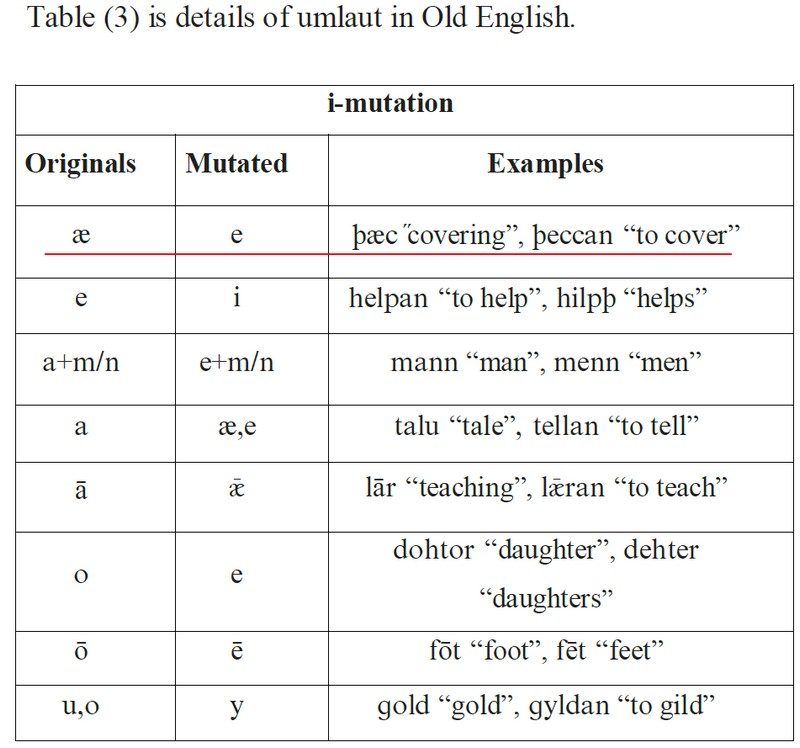 Not the answer you're looking for? Browse other questions tagged pronunciation british-english or ask your own question.

154
Why are the vowels in Christ and Christmas different? (and other strange diphthong behaviour)
17
“to bath” vs “to bathe”
1
Why does a silent “-e” at the end of a word lengthen vowels?