The same word used to define itself [duplicate]

Possible Duplicate:
Is there a word for an acronym which spells out one of its component words?

What's that figure of speech in which you use the same word to define its meaning, thereby not really defining it.

Like, "YAML Ain't Markup Language", the expanded form of the abbreviation YAML uses itself in its definition and thus doesn't really define the actual thing.

In this case, though, through negation, it restricts the purview of its meaning to a fairly ascertainable concept. But that's just one example.

In other usages, the definition may or may not convey meaning.

Like in this definition of the Internet, "The Internet, a backward formation of inter-network, is a network of networks."

It's not synecdoche, as I used to think.

For instance a elusive statement like "God is...well, only God can define God." exemplifies it.

It uses the word whose definition is sought in the definition itself, thereby abdicating the responsibility of providing meaning or justification.

I think the word you are looking for is recursive.

pertaining to or using a rule or procedure that can be applied repeatedly.

Although God is...well, only God can define God. is more like circular reasoning, which I suppose could be seen as a basic form of recursion. Similar to this example: 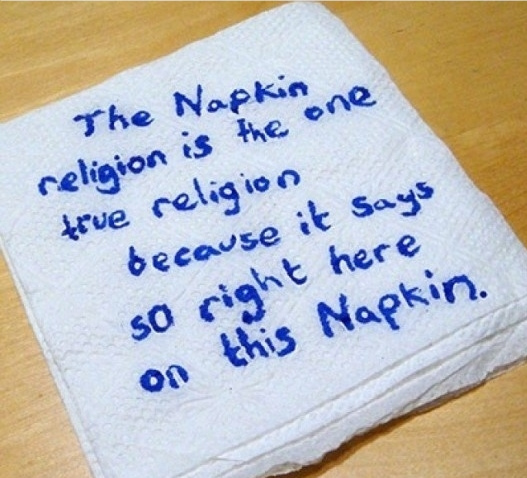 Autological word.
A word is autological or homological if it describes itself.

The common term for this is a backronym, a back-formation acronym. Also known as recursive acronym/ metacronym/ recursive initialism, this is a fun way to coin names for new programming languages and such.

No-one has mentioned tautology yet. That's when your "proof" relies on the assumption that what you're trying to prove is true. The Napkin picture above is totally a tautology. Someone who told an unfunny joke, but declared it to be funny because "I have a great sense of humour and I found it funny" then when pressed, proved their great sense of humour with reference to the just-told "very funny" joke, would be engaging in a tautology.

It's also used when extra words are included that add no meaning (free gift - are there gifts that are not free?) or mean the same things in different languages (The La Brea Tar Pits, With Au Jus Sauce) So having one of the words in an acronym be the acronym itself (most famously Gnu's Not Unix but there are many more) might also fit.

Above all, it's a pun and a little bit self-referential - software names like yacc (Yet Another Compiler Compiler), C++ (incrementing C, which itself was named because it came after B), and Apache (it's a patchy server) have a long tradition of wordplay. It can be hard to name the concept being used when it's being used playfully, but I would still argue for tautology in the case of YAML.

The everyday word for this concept, where a word is defined using the same word either immediately or via other definitions, is:

The slightly more technical sounding term 'recursive definition' also works (but would not be understood as well by most people). As an aside 'recursive' has a much more technical definition which primarily is about using other definitions, but it is not necessarily about circularity (though it often is used in that context).

In linguistic terms, the example you pose is one of being self-referential.

Not the answer you're looking for? Browse other questions tagged single-word-requests rhetoric or ask your own question.

4
Is there a word for an acronym which spells out one of its component words?
1
What is the name for a collective noun for a group of words or acronyms, that is a member of the group it describes?