Poetic technique for taking a usually comforting thing in a scary context?

Poetic technique for taking a usually comforting thing in a scary context?

I was wondering what the name of the poetic technique was, where one takes something which is usually light, comforting and playful and takes into a chilling context.

Dolls sometimes are programmed to say

But if we take this into the context of a broken doll in a pile of rubble, the "Take me with you! We'll have fun." suddenly seems like a plea for help.

Is there a name for the poetic technique of taking something with positive connotations and changing it such that it is chilling, like above?

As a general term, Lexico gives recontextualization as:

More specifically, surrealism is one aspect of recontextualizing that can be applied to horror lit. Horror literature is known for elements of surprise, confrontation, and mystery, like a doll out of its comforting context. If the audience is aware that the doll is dangerous, but the character is not, you have dramatic irony.

You could also call it absurdism or simply unsettling, as the setting in fiction is disrupted.

Since you also seek poetic devices, dissonance fits your example in part. It's the sense of unease resulting from something that doesn't sound or feel right, usually in terms of a lack of harmony or rhythm (or consonance and assonance). What you describe is a feeling that comes from more of a cognitive dissonance, but that's not the process or transformation.

Overall, that shift is the result of recontextualizing.

Another idea that could be potentially be applied here is the idea of 'the Uncanny'. It's an idea introduced to psychology by Ernst Jentsch in 1906 and elaborated on by Freud in his 1919 essay 'The Uncanny'.

In essence, use of the uncanny in literature is to take something which should be comfortably familiar and introduce a small change, which makes the reader or viewer uncomfortable - a good recent example is the Other Mother in Neil Gaiman's 'Coraline', whose eyes have been replaced with buttons. It's often associated with things like dolls, where the resemblance to humans is just a bit 'off'.

A possible answer is

In the field of psychology, cognitive dissonance occurs when a person holds two or more contradictory beliefs, ideas, or values...

In this case they know that the context is scary, but they also know that what they're hearing/seeing is supposed to be comforting. The fact that the scary context changes the meaning or implication of what they're seeing/hearing creates this dissonance.

A good example of this would be the Saw franchise's quote 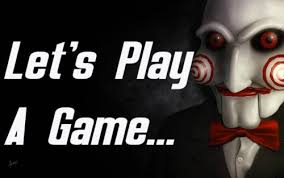 where we know that the "game" involves some version of murder/torture.

Not the answer you're looking for? Browse other questions tagged single-word-requests connotation poetry poetic-devices or ask your own question.

4
Term for pronunciation technique
4
What's the word for something that's too direct and plain rather than poetic?
4
Word for "scary thing that's about to occur"?
0
Is there a standard poetic contraction for "holiest"?
1
What is a word for "to make scary"
3
What's the word for something scary but actually harmless?
5
Term for poetic technique in which the last word of a line is the first word of the next
1
What is an adjective for the side of a mathematically-defined thing that usually points upwards?