How to translate “Facéties de Descendre” from French in the context of a board game?

I'd like to translate a card from a French board game. In particular, I'm interested about one of the names of the abilities. Now, I'm not a native English speaker, but I'm pretty sure that the official translation is incomplete and too literate: 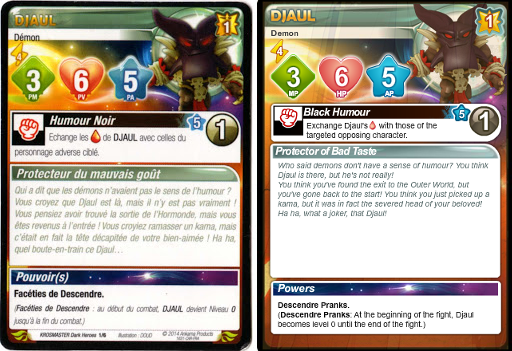 The character itself is a demon that "descends" to fight the mortals.

Now, the game is known for its puns and wordplay. I suspect that the ability name was supposed to sound like "decent pranks" or "indecent pranks", although I'm not sure if it's originally a pun name in French. With that in mind, I have 2 questions:

I've thought about "Descend Pranks", "In-descend Pranks" or "Pranks in Descend", but I'd like to hear your opinions.

Black humour is the dictionary version (e.g. Cambridge) of humour noir. The link to Wikipedia's article on Black Comedy in LPH's answer gives the origin of the term.

As for "Facéties de Descendre", I'd suggest using a play on the word 'low'. 'Low' usually refers to height, which would tie in with 'descending'. It can also mean 'not honest or unfair', which works well as an adjective to describe a prank or trick.

"Low pranks" would indicate pranks which are unscrupulous or dishonest.

There is no pun involving "descendre" and "decent"; it is so far fetched as to be sound very dull.

The Wiktionary (ref. 3) does not list "dark humor" but only "black humor" for which the synonym chosen is "black comedy". However, a distinction is made between "black humour" and "gallows humour"; that latter term is not to be confused as a synonym of "black humour", on the contrary of what is claimed in Wikipedia (see ref. 1).

2/ The basic idea seems to be concerned with a matter of level and that is what the word "descendre" (to descend) implies, a change in the level from a given point to one situated lower. However, "descendre" also has the meaning "bring down by means of a blow", "kill", and as a fight is being talked about in the card one might wonder whether there couldn't be innuendos concerning that. More knowledge about the game is needed. Nevertheless, for a translation near the plain meaning I'd chose "descending" and not "descend": neither "descend pranks" nor "in descend pranks" is correct English.

Just for the record, I came to the conclusion that "It's a Prank!" would also be a viable name for the ability. It's not a literal translation by any means, but I believe it fits the theme pretty well.

While both "Descending Pranks" and "Low Pranks" would be closer to the original meaning, I think they don't fit the overall humorous tone of the game as well.

Not the answer you're looking for? Browse other questions tagged translation french puns or ask your own question.

23
How to use “no pun intended”?
1
“The” before person name and context indication
1
If we use “fairy” in our band name, will people think of sprites or gay men?
2
Translation of Merkel Speech in Auschwitz
6
What is the editing term for a section of text in a translation which was already in the target language and therefore has not been translated?
1
Is there a pun in the name “Crodfoller T. Rhubarb”?
1
Is there a proper way to translate “Bonne continuation” from french?