Etymology of *spreadsheet* / an anachronistic use

Near the middle of chapter 14 of Murder Under A Blue Moon (2019, Abigail Keam) a character (Dexter) says, "It is an up-to-date spreadsheet of all your assets and liabilities." The story is set in April-May 1933. However, etymonline shows 1965 for the word's origin. Can anyone provide evidence for when the word spreadsheet was first in use?

The term spreadsheet was in use long before the software that now goes by that name.

Ultimately, the word arose as a term of art in the printing industry. A spreadsheet is so named because it was sheet of paper the size of a full spread — imagine a book or magazine open somewhere in the middle — the spread is the length from left edge to right, top to bottom, ie two full pages or sides (this is what advertisers mean when they excitedly talk about someone buying a full spread ad).

For example, from Association of Advertisers in Ireland's Glossary of Advertising Terms:

Refers to a pair of facing pages in a periodical, or an advertisement which is printed across two such pages.

The pre-computer provenance, the printing origins of this word, are tacitly betrayed by its morphology. The structure, the mouthfeel, of spreadsheet tickles our memory, the flavor is reminiscent - what does it bring to mind? Ah, yes, broadsheet, the long counterpart to the spreadsheet’s width (and vs the tabloid's compactness).

In other words, a spreadsheet is a wide piece of paper.

Adoption as an accounting term

Accountants have long dealt in tables of figures. They found these wide pieces of paper ideal canvases for their work, and quickly adopted these spreadsheets to tabulate information and keep accounts.

So, long before it was software, a spreadsheet was this wide piece of paper, typically ruled and used as a ledger; the width allowed one to enter and see all details at once. In other words, the details were all spread out in front of you.

We can pretty easily establish the pre-computer use of spreadsheet as an accounting term by referring to an earlier essay on this topic, exploring the history of the software.

No, a spreadsheet was an accounting method and object; for an example of use in the wild, here’s a random Congressional Ways and Means committee report repeatedly using the word in this context in 1945, in a self-illustrating way: 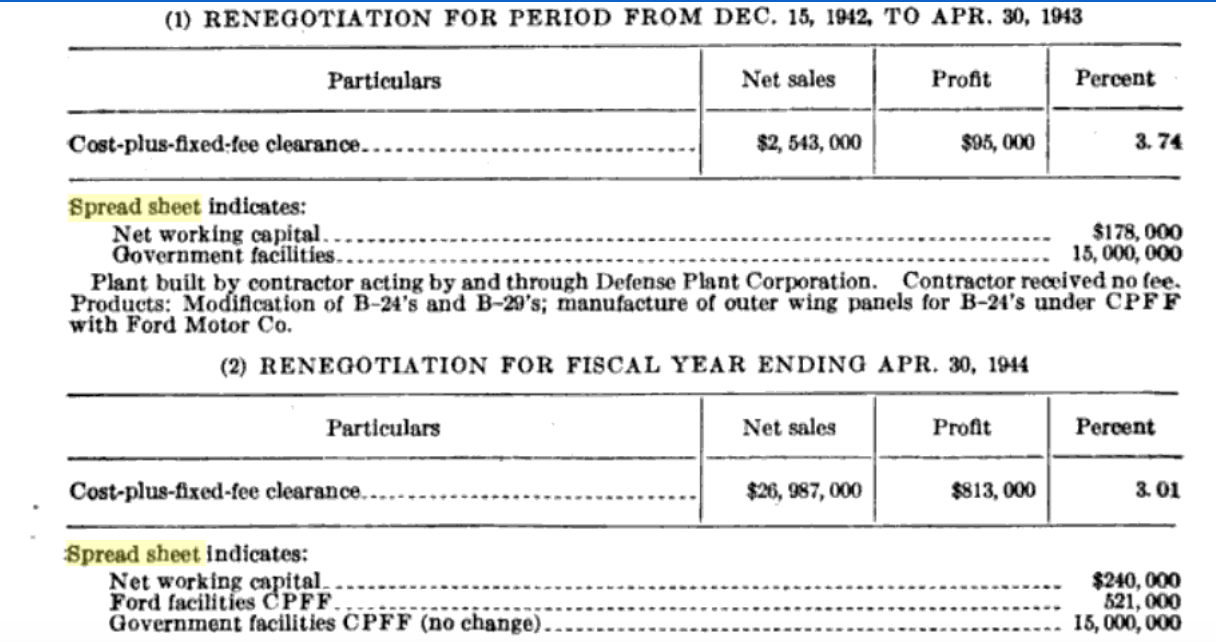 And here again in the Journal of Accountancy, Volume 53, published by the American Institute of Certified Public Accountants in 1932:

Note the "or by machine" part here -- we'll come back to it.

Anyway, the 1932 date of this professional journal for CPAs, noting spreadsheets being an old, familiar method still in common use establishes the bona fides of Ms. Keam's usage of spreadsheet in a 1933 setting.

But if these pleasures not thee move, then perhaps you'll be soothed by the OED's 1907 citation:

A document consisting of columns and rows, in which data is recorded and organized; (originally) such a document drafted or printed on a sheet of paper (now rare); (in later use) an electronic document of this kind; (also) a computer program used for creating such a document, typically capable of performing calculations automatically as data is entered.

1907 Trans. Amer. Hosp. Assoc. 9 148 A spread sheet showing every item of expenditure is prepared each month.

This lends credence to the claim in D. J. Power's history of spreadsheet software, referenced earlier, that "Spreadsheets have been used by accountants for hundreds of years".

So there you have it, the Trans American Hospital Association talking about keeping account of their business using spread sheets, three decades before the setting in which Dexter used it the same way, validates Keam's usage as felicitous, and not anachronistic (though keeping it as two separate words spread sheet, would have been more authentic).

But there's plenty more interesting things to say about spreadsheets.

One interesting point is spread persists as an independent word.

It is used in the banking and investing industries, when a noun, as jargon meaning fundamental financial information about a company in a commercial lending context. The lender uses the spreads to analyze the company’s (customer’s) financial health, viability, or creditworthiness.

When a verb, spread means the analysis of those financial vitals (aka the noun spreads), and thus as gerund, this activity, this analysis, is known as spreading.

From the RMA FAQ about financial spreads (emphasis mine):

While most of the information does get spread in accordance with GAAP, banks’ spreads deviate from GAAP in some key ways:

So here, too, we see the intimate relationship to accounting¹.

This 1913 reference is to tabulating machines, just two years after the amalgamation of the Tabulating Machine Company and 3 others into the Computing-Tabulating-Recording Company (CTR), which in 1924 would be rebranded International Business Machines, aka IBM.

Yes, that IBM, leading to this highly-compressed but deeply relevant chain of events:

I also think it's cute that 1913 piece speaks about the convenience of "creating a moveable guide with the items in the column headings written in it", the turn-of-the-century equivalent to modern spreadsheets' "freeze top row" feature.

So in the end, we circle back to where we started: people have been "doing spreadsheets" with mechanical assistance for over a century!

¹ And given the focus on “the numbers”, and the attendant constellation of meanings, I’d speculate the stand-alone word is a backformation (retroactive folk analysis) of “spreadsheet” into a “sheet of spreads”. And I’d further hazard it, too, predates the software.

Not the answer you're looking for? Browse other questions tagged etymology errors books or ask your own question.