On a certain pejorative in contemporary British English

According to the OED https://www.oed.com/viewdictionaryentry/Entry/67623) "faggot" and "fag", used to refer to gay men in a derogatory way are "originally and chiefly North American". And in this wikipedia entry https://en.wikipedia.org/wiki/Faggot_(slang)#Use_in_the_United_Kingdom it is claimed that

Use of fag and faggot as the term for an effeminate man has become understood as an Americanism in British English, primarily due to entertainment media use in films and television series imported from the United States.

This chimes with my experience. In much of my lifetime, in British English, "fag" was more commonly used to refer to a cigarette than it was used as a slur to refer to gay men; in fact, I have only begun to hear "fag" and "faggot" being used by native British English speakers in a derogatory manner in the last 12 or so years. In the past, "poof" or "poofter" were the words usually used to insult gay men in British English. I have the impression that this is changing.

I am thus wondering when the usage of "fag" and "faggot" as derogatory terms began to be more widespread in British English, as opposed to "poof" or "poofter", or other slurs.

British English speakers, or any English speakers who have lived in the UK since at least the 90's: when do you remember the terms "faggot" and "fag" becoming more commonly used as a slur against gay men in British English? Can you refer to a particular experience? Do you remember what kind of people tended to use the expression? (were they, for example, younger people?)

Someone below points out that "faggot" is used in the lyrics of the song "Money for Nothing", by British band Dire Straits. This is not incompatible with what I was observing in my question, for I only observed that, in my experience, "faggot" and "fag" used to be quite uncommon in British English as derogatory terms for gay men.

I will not give a comprehensive answer but I offer you some online tools that you may not be aware of.

Here you see the graph of search for "fag" and "faggot" in British English In it you will notice that "something" is happening around the mid to late 1800s. I haven't investigated. However there is a notable growth and peak centering around 2010, especially of "fag". If you want to see the actual texts in order to investigate the context and usage, you can click on dated links at the bottom of the page on the original graph. https://books.google.com/ngrams/graph?content=fag%2Cfaggot&year_start=1800&year_end=2019&corpus=29&smoothing=3 - Clicking through will take you to the very useful

Google Books site where you can make further investigations. 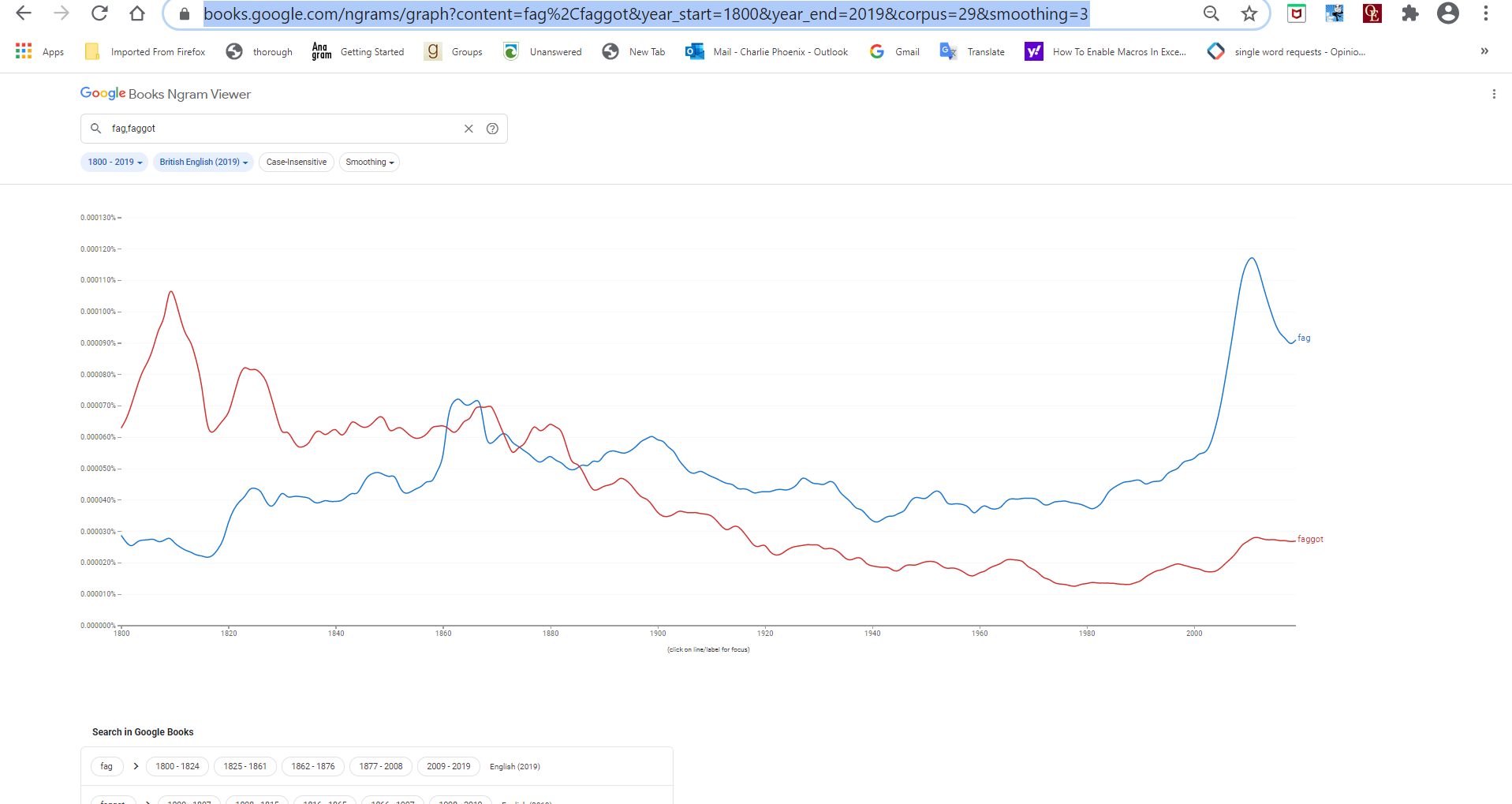 Here is the link to a similar graph for American English

If you become familiar with using these resources, you can combine versions of English, change the time period and do other more subtle searches.

From these sites you can often discover

Old dictionaries with definitions as known at the time period.

Fag. # n.s. [from the verb.] . A slave; one who works hard. It is a colloquial expression; nor is fag, either as a verb or substantive in this sense, seriously used by good writers.

A Dictionary of the English Language: ..., Volume 2 By Samuel Johnson

One way to investigate further is to use

These will give you an idea of common contexts for the words. Two can be particularly recommended.

These open up a whole world of research possibilities. They do however take considerable determination to wade through the documentation in order to discover how to do what. If you are sufficiently interested then its worth making the effort.

Not the answer you're looking for? Browse other questions tagged british-english slang pejorative-language offensive-language contemporary-english or ask your own question.

11
Does "prescriptive" have solely a negative sense in some communities?
9
Origin of fag (meaning a cigarette in British English)
11
Did British chef Jamie Oliver redefine “pukka” in 1999?
3
Meaning and usage of "dead-and-alive"
1
Term for reclaiming or restoring pride in social stigmas ("Taking it back")?
7
A lady or a woman?
5
Is the word 'gratuitous' different in British and American english?
10
Is the phrase "stone-throwing devil" actually a slur?
22
“pig book” – when, where & why has a booklet of college students with photos been called a “pig book”?
1
How is "composite" as a verb pronounced in British English?