Can 'postsynaptic' be written as 'post-synaptic'?

Under the heading "Excitatory and inhibitory postsynaptic potentials" in this article on Khan Academy, the word 'postsynaptic' is written with and without a hyphen. Does this imply that both ways of writing 'postsynaptic' and 'post-synaptic' are correct?

Sorry if I'm being too nitpicky here, I'm really just wondering. Maybe it has to do something with the word in front of it.

I completely missed the other 7 occurences of 'post-synaptic' in the article, but I still don't understand whether it means something different.

The closed version is more common that the hyphenated version. (As shown by another answer here.)

For actual context, here are two paragraphs from the article in question. Note that the second comes some time after the first (the emphasis exists in the referenced text):

Chemical transmission involves release of chemical messengers known as neurotransmitters. Neurotransmitters carry information from the pre-synaptic—sending—neuron to the post-synaptic—receiving—cell.

I can personally see no reason for the inconsistent style decision made here. Normally, you pick one way of spelling a word and stick to it throughout—unless there is a particular context that would have it be spelled differently in a certain section.

There might be some reason that the author chose to mix the spelling of the words, but I can't determine what it could have been.

In fact, the use of the hyphenated version seems like a particularly strange choice given that the hyphenated words are used right next to em dashes, which causes a certain inability to parse the sentence quickly.

Here's what Google Ngram indicates. I think postsynaptic wins by a considerable margin. Click on the link below the picture to do your own searches. 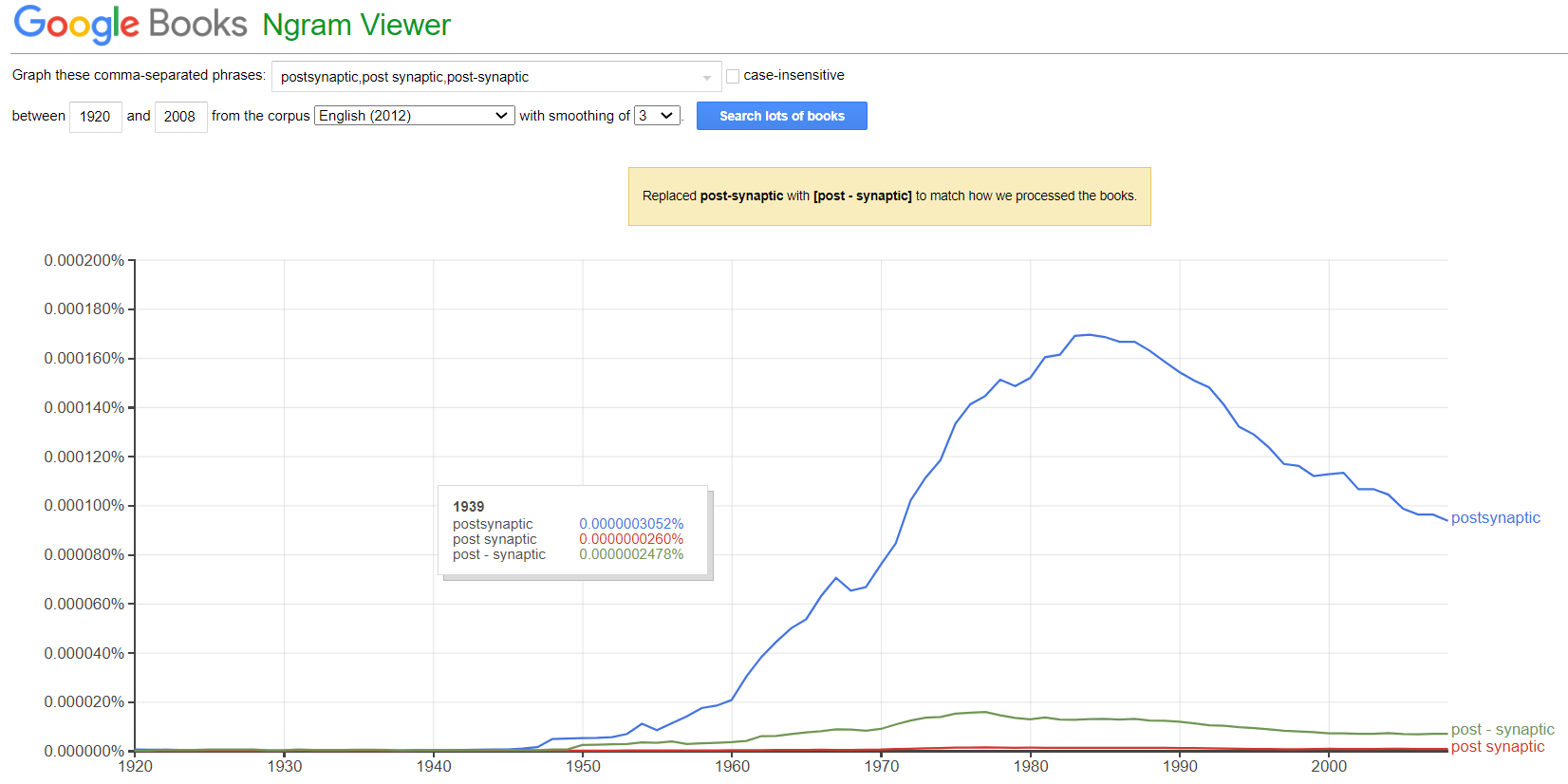 If you want to know what is used in the scientific literature then I suggest Google Scholar - Type in the various possibilities and see what the result is. For example if I search for post-synaptic, Google Scholar asks if I meant postsynaptic. I believe that this indicates that the former is less common but, as you will see, it is used somewhat in some papers.

Did you mean: postsynaptic

Not the answer you're looking for? Browse other questions tagged orthography hyphenation or ask your own question.

12
Post-hyphenation of split compound words
151
Is it “front-end”, “frontend”, or “front end”?
5
Is a badly-written book a book [which has been] badly written?
1
How should “makeup” be written in BrEng?
5
Use of hyphen with the prefix “post-”
0
Is this sentence well written?