Difference between the words "betrayal" and "treachery"

I kindly ask you to help me to understand the difference between the words "betrayal" and "treachery".

I heard these words while watching the Lord of the Rings in English. There are two scenes:

1) "There is no curse in Elvish... Entish or the tongues of Men... for this treachery."

2) "Rohan... ...has deserted us. Théoden's betrayed me." (The corresponding noun of the verb betrayed is betrayal).

I searched the Internet for other examples but for now, I can't precisely understand the difference between these two words.

"Betrayal" implies that there was some sort of loyalty due in the first place, and that this loyalty was violated. "Treachery" simply implies malicious deception, even in the absence of cause for loyalty.

betrayal: The action of betraying one's country, a group, or a person; treachery.

betray: Expose (one's country, a group, or a person) to danger by treacherously giving information to an enemy.

They are very close synonyms. Dictionaries often define each in terms of the other.

I personally would say that the main difference is that treachery is somewhat old-fashioned and betrayal is more recent.

The following Google Ngram shows the difference in usage over the years. As you can see the graph supports my idea. Click on the link below the graph to see a live version of the graph.

Rather than search online, presumably using a search engine, I suggest you consider using one of the corpora that are available for free use. For example COCA is the Corpus of Contemporary American English https://www.english-corpora.org/coca/

You need to work out how to use it (not too difficult after a little head-scratching) but here is a result I got when searching for treachery. 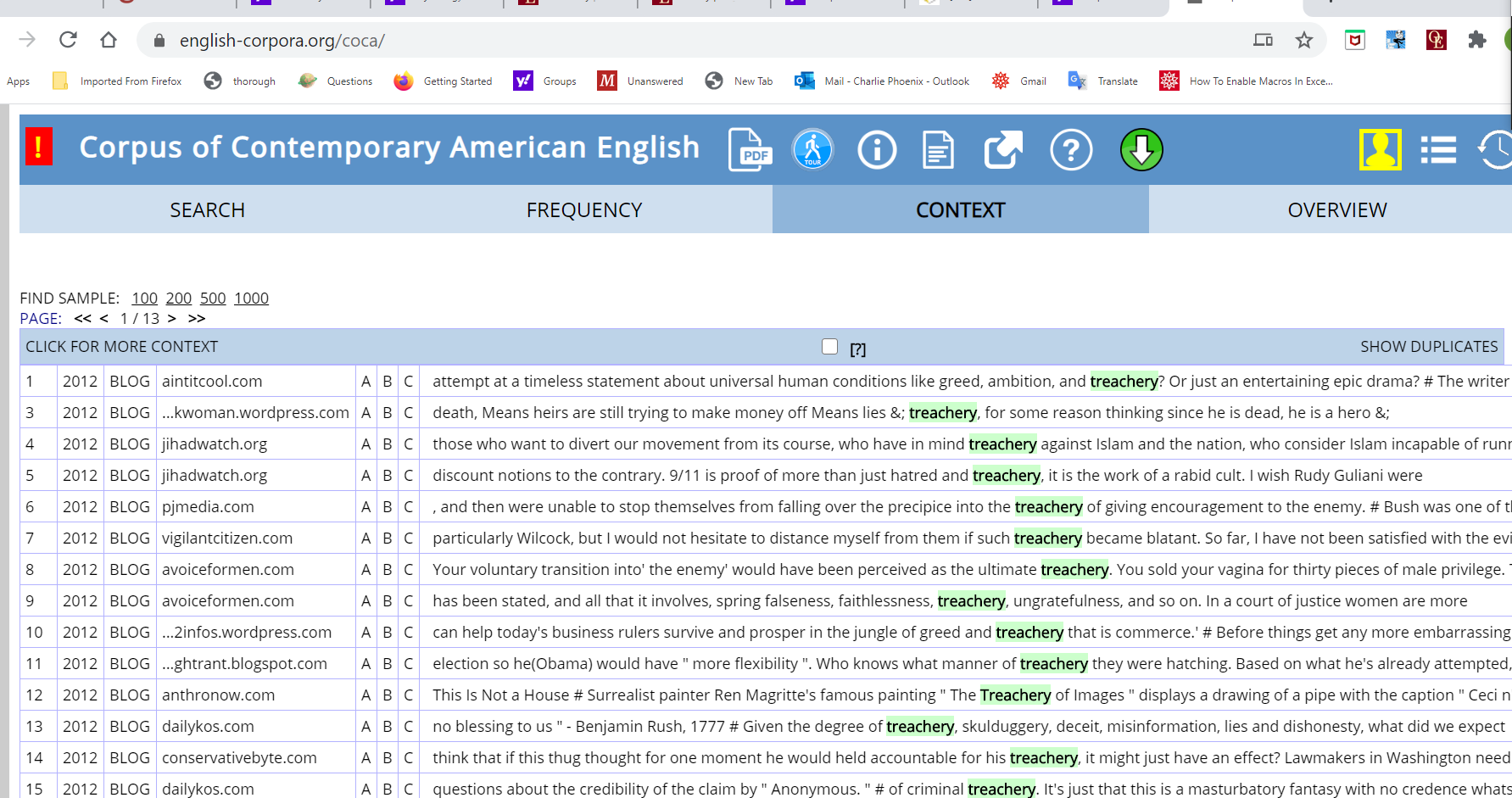 Briefly, what differences there are to tease out of the two terms boil down to these:

Because your two citations are from movies based on Tolkien’s written works, we can better understand how the author used those words by examining them in the context of his writings.

In The Lord of the Rings, words starting with “treacher-” occur 36 times, while those starting with “betray-” occur exactly half as often at 18 times. Incidentally, the figures for the related terms “traitor-” and “treason-” are 9 and 6 times respectively. Your first quote from the movie is taken directly from the book. It runs in full:

‘Quickly?’ said Treebeard. ‘Hoom! Yes, indeed. Quicker than I expected. Indeed I have not seen them roused like this for many an age. We Ents do not like being roused; and we never are roused unless it is clear to us that our trees and our lives are in great danger. That has not happened in this Forest since the wars of Sauron and the Men of the Sea. It is the orc-work, the wanton hewing – rárum – without even the bad excuse of feeding the fires, that has so angered us; and the treachery of a neighbour, who should have helped us. Wizards ought to know better: they do know better. There is no curse in Elvish, Entish, or the tongues of Men bad enough for such treachery. Down with Saruman!’

Most mentions of treason and treachery involve Saruman, as the treason of Isengard is especially significant to the plot of the novel. He double-crossed both sides, secretly working against them both in pursuit of goals entirely his own.

Your second quote from the movies is not to be found in the books, at least not directly. Denethor never said that Théoden had betrayed Gondor, nor did he order the Guards of the Citadel to abandon their sworn posts.

But Tolkien does use betray- words often enough. Here’s a quote that includes both of the terms you are interested in which they are used in a contrasting way showing their distinct applications:

‘I cannot answer that now,’ said Gandalf. ‘Yet my heart guessed that Frodo and Gollum would meet before the end. For good, or for evil. But of Cirith Ungol I will not speak tonight. Treachery, treachery I fear; treachery of that miserable creature. But so it must be. Let us remember that a traitor may betray himself and do good that he does not intend. It can be so, sometimes. Good night!’

He even later boils down that principle to the famous proverb:

Oft evil will
shall evil mar.

Here are other quotes involving betrayals, in no particular order:

‘This is grievous news concerning Saruman,’ he said; ‘for we trusted him and he is deep in all our counsels. It is perilous to study too deeply the arts of the Enemy, for good or for ill. But such falls and betrayals, alas, have happened before. ...’

This was not at all to the liking of Gimli. ‘The agreement was made without my consent,’ he said. ‘I will not walk blindfold, like a beggar or a prisoner. And I am no spy. My folk have never had dealings with any of the servants of the Enemy. Neither have we done harm to the Elves. I am no more likely to betray you than Legolas, or any other of my companions.’

‘I did not mean the danger that we all share,’ said Frodo. ‘I mean a danger to yourself alone. You swore a promise by what you call the Precious. Remember that! It will hold you to it; but it will seek a way to twist it to your own undoing. Already you are being twisted. You revealed yourself to me just now, foolishly. Give it back to Sméagol you said. Do not say that again! Do not let that thought grow in you! You will never get it back. But the desire of it may betray you to a bitter end. You will never get it back. In the last need, Sméagol, I should put on the Precious; and the Precious mastered you long ago. If I, wearing it, were to command you, you would obey, even if it were to leap from a precipice or to cast yourself into the fire. And such would be my command. So have a care, Sméagol!’

And as he waited, he felt, more urgent than ever before, the command that he should put on the Ring. But great as the pressure was, he felt no inclination now to yield to it. He knew that the Ring would only betray him, and that he had not, even if he put it on, the power to face the Morgul-king-not yet.

But it was no orc-chieftain or brigand that led the assault upon Gondor. The darkness was breaking too soon, before the date that his Master had set for it: fortune had betrayed him for the moment, and the world had turned against him; victory was slipping from his grasp even as he stretched out his hand to seize it. But his arm was long. He was still in command, wielding great powers. King, Ringwraith, Lord of the Nazgûl, he had many weapons. He left the Gate and vanished.

Not too soon came their aid to the Rohirrim; for fortune had turned against Éomer, and his fury had betrayed him. The great wrath of his onset had utterly overthrown the front of his enemies, and great wedges of his Riders had passed clear through the ranks of the Southrons, discomfiting their horsemen and riding their footmen to ruin. But wherever the mûmakil came there the horses would not go, but blenched and swerved away; and the great monsters were unfought, and stood like towers of defence, and the Haradrim rallied about them.

In that hour of trial it was the love of his master that helped most to hold him firm; but also deep down in him lived still unconquered his plain hobbit-sense: he knew in the core of his heart that he was not large enough to bear such a burden, even if such visions were not a mere cheat to betray him. The one small garden of a free gardener was all his need and due, not a garden swollen to a realm; his own hands to use, not the hands of others to command.

And here are a few quotes illustrating treacherous uses:

But after ages alone in the dark Gollum’s heart was black, and treachery was in it. He slipped away, and returned to the island, of which Bilbo knew nothing, not far off in the dark water.

‘A Ring of Power looks after itself, Frodo. It may slip off treacherously, but its keeper never abandons it.

From Frodo’s mind the bright morning – treacherously bright, he thought – had not banished the fear of pursuit; and he pondered the words of Gildor.

The marshes were bewildering and treacherous, and there was no permanent trail even for Rangers to find through their shifting quagmires.

‘At first I feared, as Saruman no doubt intended, that Radagast had also fallen. Yet I had caught no hint of anything wrong in his voice or in his eye at our meeting. If I had, I should never have gone to Isengard, or I should have gone more warily. So Saruman guessed, and he had concealed his mind and deceived his messenger. It would have been useless in any case to try and win over the honest Radagast to treachery. He sought me in good faith, and so persuaded me.’

Paths were few and winding, and led them often only to the edge of some sheer fall, or down into treacherous swamps.

Gimli strode forward undeterred, and found that the water was shallow, no more than ankle-deep at the edge. Behind him they walked in file, threading their way with care, for under the weedy pools were sliding and greasy stones, and footing was treacherous.

So Tolkien often uses betray in the sense of giving something away that should not be, more often in fact than he uses it to mean the simpler sense of reversing one’s allegiance the way Peter Jackson did in the movie. Tolkien often uses treachery to mean hidden evil or perils, something actively and secretly malicious.

Tolkien knew his words. Indeed, he worked on the OED when he was younger. The OED says this of the verb betray. Remember that as an historical dictionary, the OED lists earlier senses first:

Whereas treachery the OED says is:

Along with treason, Tolkien uses these words in many of those slightly different senses. But he never used perfidy or perfidious, which are a bit fancier, as infamously found in Perfidious Albion, a term first found in French. Over the centuries there were even more of these Latinate terms related to betrayal, treason, and treachery than remain current today, including the likes of bewray, betraise, traisement, trechetting, tradiment, and prodition.

Ironically, frankly all the words English now uses for these acts are Latinate terms acquired through French. Read into that what you will. Few Germanic terms like forsworn, oathbreaker, or trothless are used today even though they figured prominently in our most ancient literature. For example, Beowulf has the line which in the original Old English runs:

Meaning that “he had forsworn victory-weapons”. (Albeit this instance is thought to be forsworn with the sense of bespelled.)

You might get away with forsworn these days, but I’d stay clear of trothless.

Not the answer you're looking for? Browse other questions tagged word-usage differences synonyms or ask your own question.