Scheduled FOR or IN the next days

Which preposition should be used in this sentence:

"She has 5 sessions scheduled for/in the next 7 days."

For context: I want to say that she has booked this number of sessions with the instructor and will take them during the next 7 days. Which preposition should I use in the sentence? I usually use "for" in such context, but also found examples with "in" that seem to have the same meaning...Or can I use both prepositions without no difference in the meaning? 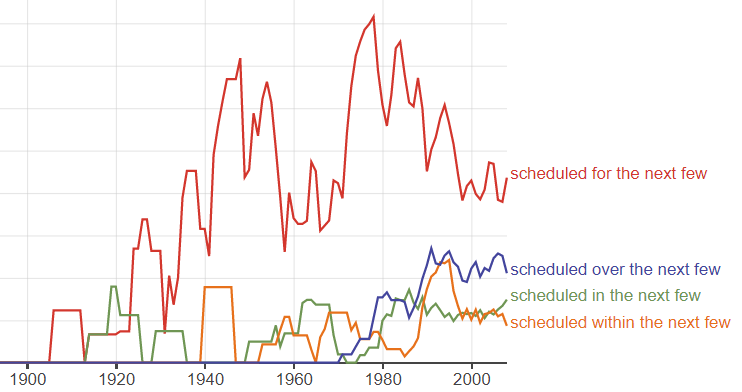 (There will be valid alternatives such as scheduled across or during (some future time-span) that simply don't occur often enough to show in a chart like that.)

I see no reason to suppose differences in intended meaning1 might affect the choice of preposition. It's effectively a stylistic choice, but learners (non-native speakers) should probably stick to the most common (for).

1 Apart from @anotherdave's somewhat contrived difference when using to schedule as an "active" verb, whereby The timetable for the June exams will be scheduled in the last week of May would become nonsensical if we changed in to for.

1
Schedule in the next week