In school I learned to say 'crisps' but I don't want to mix it with french fries. So what's the correct term for potato chips, and what synonyms are there?

They chose potato chips as the article's lemma, which seems to be the least ambiguous term in common use.

In British English, chips are deep-fried pieces of potato cut in varying lengths and with a profile that can also vary, but which might roughly be 1cm square. In American English, these are, I understand, called French fries, or just fries. Very thin deep-fried slices of potato, usually sold in bags and typically eaten as an accompaniment to beer are crisps in British English. Elsewhere, I believe they are confusingly called chips. So, no, there’s no one term that is internationally reliable. If in doubt, ask to look before you eat or buy.

Chips can also be bought frozen to cook in the oven. They're known by the strikingly original name of oven chips. 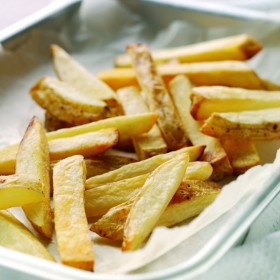 These are potatoes cut into pieces about the width of a finger, and deep fried in lard, beef dripping, or some other fat with similar cooking properties, until the middle is cooked.

In Britain, they are known as "chips".

In the USA they are sometimes known as "chips" (when served as part of "fish and chips"), but they are more frequently called "French fries" - although an American might well complain that these French fries weren't crispy enough. 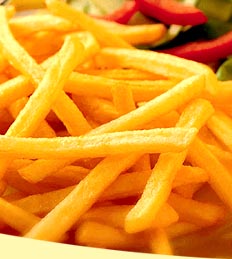 These are potatoes cut into narrower pieces, and deep fried in vegetable oil, with the aim of getting a crispy outside.

In Britain they are known as "French fries" on packaging and restaurant menus. Many British people would still call them chips.

In the USA they are known as French fries, or just "fries". 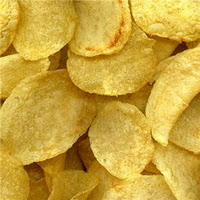 These are potatoes sliced very thinly, and fried until they are rigid and crispy.

In the UK they are known as "crisps". In Britain, if you asked for "chips" and received crisps, you'd be surprised.

In the US they are known as "potato chips" or sometimes just "chips". 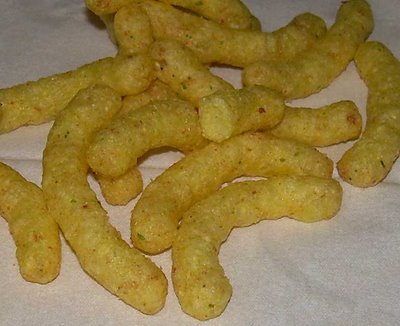 These are an arbitrary pre-packaged snack that are not made from potato. Although these ones are corn puffs with spicy flavouring, the picture is meant to represent the whole range of crunchy savoury snacks that come in bags.

In the UK, although the packaging will never say "crisps", a person might casually refer to them as "crisps" anyway - knowing it's not strictly accurate, but not caring.

I think an American might similarly refer to them as "chips". Perhaps an American can comment and confirm?

I don't know of any term that would mean the same thing on both sides of the Atlantic.

To an American, "french fries" are potatos cut into long, thin strips, traditionally "crinkle cut" but McDonalds introduced straight-cut fries and that has become something of the norm.

Not the answer you're looking for? Browse other questions tagged phrases synonyms food or ask your own question.

24
Does British English have a word for dry, starchy savoury snacks that are not fried slices of potato?
1
Hypothetical term for existence at every point in time

9
Is there an English word meaning “snacks eaten as an accompaniment while drinking alcohol”?
28
Correct, clear, concise way to use “potato-potato” in writing
20
What's the word for “busting the myth”?
1
I'll have a or the regular hamburger
3
Synonyms for the meaning of the 'shrugging' gesture
1
What's an alternative for the word “profile” in the context of computer software/data (and not relating to people or users)?
2
What's the word for day/night?
9
What's the verb for “cooking” pizza?