Did the word "Crocodile" have a dreadful connotation in London 1600s?

I am writing a period-piece play based in London circa 1660s and wrote a poetic line that alludes to the crocodile as a "fearsome foe" or of much "danger and dread".

I examined every mention of the word "crocodile" in Shakespeare (not too-too before the play's set-period) and its etymology origin (which states it meant a large amphibious reptile) dates from the 1560s.

Shakespeare never considers the "crocodile" like an animal of dread but rather, according to its mention in Othello being the much older "crocodile-tears" reference, which I thus conclude that it must have been regarded as having a cunningness to it, but would it have been considered in any way of "exotic horror" or "dread"? Which I arguably will consider as the more accepted, modern-day connotation which lies in them.

O devil, devil!
If that the earth could teem with woman's tears,
Each drop she falls would prove a crocodile.
Out of my sight!

And furthermore, if my distinction and confinement of basing the connotation to London 1660s is much too specific, then any insight on the connotations of the word anywhere in the 17th Century would be most well regarded and thanked.

P.S. Since I am already asking on the basis of the "crocodile", anything on the timed connotations of the "alligator", which I know is attested to the mid-16th century origin, would be appreciated likewise.

Othello being the much older "crocodile-tears" reference, which I thus conclude that it must have been regarded as having a "fox-like" cunningness to it, but would it have been considered in any way of "exotic horror" or "dread"?

Crocodile-tears have nothing to do with "fox-like" cunning – they are a description of feigned sorrow at circumstances in which the person shedding them is secretly delighted at the misfortune that has befallen the other person.

The presence of “crocodile tears” in the language gives the evidence that crocodiles and their nature must have been known well before the metaphorical reference.

The bestiaries, famous for their depiction of animals (real and imagined), of the Middle Ages (https://en.wikipedia.org/wiki/Bestiary) were very popular. The creatures that they described were always linked in some way to Christianity and saw animals as examples of moral traits in humans.

Among the animals, there is, of course the crocodile (http://bestiary.ca/beasts/beast146.htm), which has been known in the West since at least the 5th century BCE – Herodotus, who was read by the educated, wrote a good, almost scientific, description.

(History, book 2): The following are the peculiarities of the crocodile:- During the four winter months they eat nothing; they are four-footed, and live indifferently on land or in the water.

However, in England, in the 13th century, from a monk, we have

Bartholomaeus Anglicus [13th century CE] (De proprietatibus rerum, book 18): If the crocodile findeth a man by the brim of the water, or by the cliff, he slayeth him if he may, and then he weepeth upon him, and swalloweth him at the last.

The idea is that the crocodile is similar to sinners who appear to repent but, in fact, secretly delight in what they have done, and will certainly repeat their sins. And the story gives fair warning about the crocodile being dangerous and fearsome.

From this we can see that at the time of Shakespeare, the population were familiar with crocodiles and their part in teaching the nature of mankind. 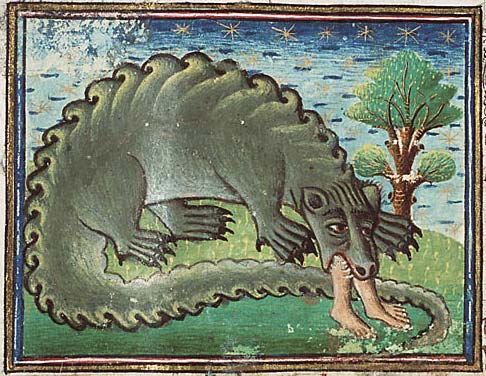 In addition to his famous allusion to crocodile tears in Othello (mentioned in the posted question), Shakespeare has this cryptic and amusing exchange between Lepidus and Antony in Antony and Cleopatra:

Lepidus. What manner o' thing is your crocodile?

Antony. It is shaped, sir, like it self ; and it is as broad as it hath breadth : it is just so high as it is. and moves with its own organs : it lives by that which nourisheth it; and the elements once out of it, it transmigrates.

Lepidus. What colour is it of?

Antony. Of its own colour too.

Antony. 'Tis so. And the tears of it are wet.

It seems to me that Shakespeare accomplishes a couple of things here. First, he offers a teasing critique of the dubious zoological expertise of Elizabethan nature and travel writers such as Edward Topsell (and their sources, going back to ancient Rome and Greece). Second, he points out the curiosity and the credulity of Elizabethan audiences in the face of supposedly authoritative sources.

I suspect that more than a few Londoners of the 1600s were as much in the dark about what manner of thing a crocodile is as Lepidus was. Edward Topsell discusses the crocodile extensively in his book The historie of serpents. Or, The second booke of liuing creatures wherein is contained their diuine, naturall, and morall descriptions, with their liuely figures, names, conditions, kindes and natures of all venemous beasts: with their seuerall poysons and antidotes; their deepe hatred to mankind, and the wonderfull worke of God in their creation, and destruction (1608), published a year after Antony and Cleopatra was first performed.

The History of Serpents, as Topsell frankly observes, relies for its information primarily on Conrad Gessner's Historiae Animalum (1551–1558), who in turn leaned heavily on Ancient Roman sources. In fact, the Wikipedia article on Topsell quotes him as saying, "I would not have the Reader," Topsell writes, "... imagine I have ... related all that is ever said of these Beasts, but only [what] is said by many." So he is in the same state of dependence on received report as Lepidus is. He was, moreover, "not naturalist himself" according to Wikipedia, but "a cleric and author."

The History of Serpents actually divides crocodiles into four primary types, which Topsell introduces as follows:

Because there be many kindes of Crocodiles, it is no marvel although some have taken the word Crocodilus for the Genus, and the several Species, they distinguish into the Crocodile of the earth and the water. Of the earth are sub-divided into the Crocodiles of Bresilia, and the Scincus: the Crocodiles of the water into this here described, which is the vulgar one, and that of the Nilus; of all of which we shall entreat in order, one successively following another. But I will not contend about the Genus or Species of this word, for my purpose is to open their several natures, so far as I have learned, wherein the works of Almighty God may be known, and will leave the strife of words to them that spend their wits about tearms and syllables only.

Topsell's descriptions and illustrations of these various subcategories of crocodiles, however, suggest that the "crocodiles of the earth" are actually types of desert lizards, monitor lizards, and skinks. With regard to the animal's dreadfulness, Topsell offers this commentary about the crocodiles of the water:

The nature of this beast is to be fearful, ravening, malitious, and treacherous in getting of his prey, the subtilty of whose spirit, is by some attributed to the thinnesse of his bloud, and by other to the hardnesse of his skin and hide. How it dealeth with her young ones we have shewed already, as it were trying their nature whether they will degenerate or no, and the like things are reported of the Asps, Cancers, and Tortoyses of Egypt.

From hence came the conceit of Pietus Crocodili, the piety of the Crocodile. But as we have said, it is a fearful Serpent, abhorring all manner of noise, especially from the strained voice of a man, and where he findeth himself valiantly assaulted, there also he is discouraged, and therefore Marcellinus saith of him, Audax Monstrum fugacibus, at ubi audacem senserit timidissimum : An audacious Monster to them that run away, but most fearful where he findeth resistance.

To conclude this discourse of Crocodiles inclination, even the Egyptians themselves account a Crocodile a savage a nd crule murthering Beast, as may appear in their Hieroglyphicks, for when they will decipher a mad man, they picture a Crocodile, who being put from his desired prey by forcible resistance, he presently rageth against himself. And they are often taught by the lamentable experience, which fraud and malice to mankinde liveth in these Beasts, for they cover themselves under willows and green hollow banks, till some people come to the Waters side to draw and fetch water, and then suddenly, or ever they be aware, they are taken and drawn into the water. And also for this purpose, because he knoweth that he is not able to over-take a man in his course or chase, he taketh a great deal of water in his mouth, and casteth it into the path-wayes, so that when they endeavour to run from the Crocodile, they fall down in the slippery path, and are over-taken and destroyed by him. The common proverb also, Crocodili lachrymæ, the Crocodile tears, justifieth the treacherous nature of this Beast, for there are not many brute Beasts that can weep, but such is the nature of the Crocodile, that to get a man within his danger, he will sob, sigh, and weep, as though he were in extremity, but suddenly he destroyeth him. Others say, that the Crocodile weepeth after he devoureth a man. Howsoever it be, it noteth the wretched nature of hypocritical hearts, which before-hand will with faigned tears endeavour to do mischief, or else after they have done it be outward sorry, as Judas was for the betraying of Christ, before he went and hanged himself.

Grammarians may be particularly susceptible to the beast's wiles, at least to judge from the example of Artemidorus, which Topsell recounts:

It is reported that the famous Grammarian Artemidorus seeing a Crocodile lying upon the sands, he was so much touched and moved therewith, that he fell into an opinion that his left leg and hand were eaten of by that Serpent, and that thereby he lost the remembrance of all his great learning and knowledge of Arts.

Topsell's descriptions of exotic animals had considerable currency in literate circles of seventeenth-century England and undoubtedly percolated (with inevitable inaccuracies and exaggerations added to them) into the folk wisdom of the illiterate masses of English society as well.

It seems likely that a Londoner in the 1600s who had any notion of a crocodile at all would think of it as being very large, very sneaky, and very dangerous.

Not the answer you're looking for? Browse other questions tagged usage history early-modern-english or ask your own question.